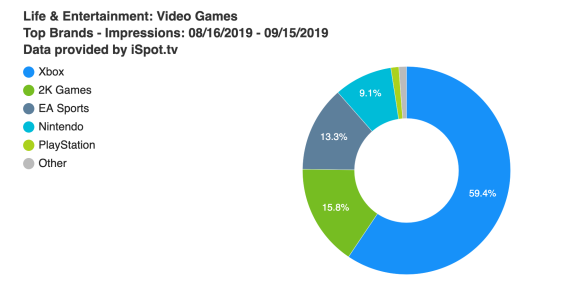 Xbox has overtaken longtime chart-topper Nintendo for TV ad impressions in the most recent 30 days; its commercials account for almost 60% of the industry’s impressions. Football, both college and NFL, was a huge driver of impressions for Xbox.

GamesBeat has partnered with iSpot.tv, the always-on TV ad measurement and attribution company, to bring you a monthly report on TV advertising by the gaming industry. These are the ads, and by extension the games, that publishers are putting major muscle (and bucks) behind.

Below are the top five most-seen gaming industry TV advertisers from August 16 through September 15.

As summer came to a close, gaming brands amped up their outlays: The industry had an estimated spend of $19.6 million, compared to $5.6 million in the previous 30 days, with 10 brands airing 34 spots over 3,100 times, racking up 1.04 billion TV ad impressions.

First place goes to Xbox with over 616.9 million impressions generated by four ads that aired 1,601 times. The Gears 5 commercial “The Chain” was its most-seen spot with over 385.8 million impressions. Fox, NBC, and ESPN were three of the networks generating high impression-counts for Xbox, while top programming included the NFL, college football, and SportsCenter.

Nintendo, which had ruled with TV ad impressions over the summer, drops to fourth place. It aired nine spots 446 times, resulting in 94.1 million impressions. “Disney Channel: Summer Fun,” advertising the Switch, was its most-seen commercial with 43.5 million impressions. Three of the networks with high impression-counts included Disney Channel, Nick, and Cartoon Network, while some of the top shows were SpongeBob SquarePants, The Loud House, and Bunk’d.

PlayStation closes out the chart with 11.6 million impressions generated by a single ad, “Become Your True Self,” featuring Megan Fox, which aired 116 times. Adult Swim, A&E, and Independent Film (IFC) were three of the networks that generated the most impressions, while top shows included Dragon Ball Super, Live PD, and Family Guy.