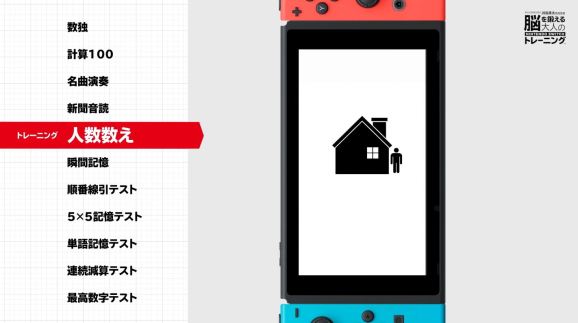 A new Brain Age for the Nintendo Switch.

Nintendo is going to bring back one of its biggest franchises on the hybrid Switch handheld/home console. No, it’s not F-Zero or Style Savvy. The company revealed in an announcement today that Brain Training is coming to the Switch in Japan on December 27.

Brain Age: Train Your Brain in Minutes a Day was a major success on the Nintendo DS in 2005 and beyond. It was part of the publisher’s efforts to appeal to an audience of players beyond core gamers. Nintendo designed the games based on the research of Japanese neuroscience expert Ryuta Kawashima. The idea is that people can ward off some of the mental decline of aging through simple brain-teasing exercises.

Now, the game is returning and taking advantage of the Switch. The original Brain Age and its sequels used the DS’s touch functionality, microphone, and more. It used hand-writing detection to understand numerical input, for example. The Switch version features many of those same exercises and technologies. But Nintendo is also using the infrared camera in the base of the right Joycon to recognize hand gestures.

I’ve reached out to Nintendo of America to ask about the potential of the game launching in the West. I’ll update this post with any new information about that release.

Brain Age for Switch returns to a different world

In the absence of Brain Age, which didn’t really have much presence on Nintendo 3DS or Wii U, brain training has grown in popularity. Companies like Luminosity have begun offering Web-based cognitive training to help sharpen people’s minds. Many people believe that brain training can fight off dementia/Alzheimer’s.

But more recent research has begun to question the value of such cognitive tests. A 2016 study claims that regularly doing arithmetic in fast, short bursts only really helps improve your performance in arithmetic. Those exercises, however, don’t have far-reaching mental-health benefits.

Here’s how the researchers explained it in their peer-reviewed paper:

Doubts surrounding the science of brain games led to the Federal Trade Commission looking into the industry in 2015. It’s possible that those legal concerns could convince Nintendo to avoid bringing the Switch game out in the United States.

Nintendo has played up the potential health benefits in the past. It often brings up the game’s relationship to Dr. Kawashima and his work on aging at Tohoku University. Kawashima was even your coach in Brain Age and Brain Age 2. And the publisher is once again invoking his name for the Switch update.

But the company has stopped short of making direct claims itself. It says Brain Age takes inspiration from Kawashima. It doesn’t call the Brain Age games a medical treatment.

I’m someone who really enjoyed the Brain Age games. And even now, with knowledge of the skepticism around the science, I’m still interested. Even if it was a Placebo effect, the games made me feel sharper. So I’ll give this new game a chance if it gets an English version.