Tyler “Ninja” Blevins is doing fine on Mixer. His livestreams continue to attract tens of thousands of viewers. But Ninja’s success is not lifting up other broadcasters on Microsoft’s livestreaming video platform, according to StreamElements and data-tracking firm Aresenal.gg.

As more kids went back to school in September, livestreaming hours watched dropped across Twitch, YouTube, and Mixer compared to August. But while those platforms are all dealing with typical seasonal decline, Twitch built on its lead over the others. Twitch’s share of the total livestream hours watched grew 3% from Q2 to Q3. 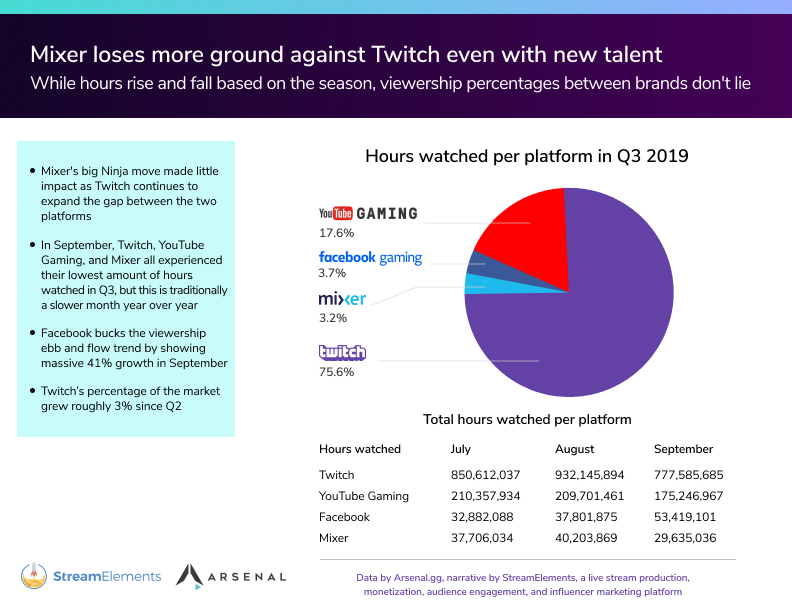 The takeaway here is that Mixer’s big-money deal to sign Ninja in August isn’t having much of an impact yet.

“While we regularly see a drop in hours watched from August to September, there are some interesting Q3 developments worth noting in the live streaming space,” StreamElements chief executive Donor Nir said. “For one, Ninja’s move to Mixer turned out to not be the game changer they probably hoped when comparing their market share with Twitch’s.”

Is Mixer’s Ninja experiment a failure?

Ninja hasn’t shared the details of his Mixer deal, but he likely has an exclusive contract for multiple years.

This should give Microsoft the chance to try multiple strategies to build on Ninja. And it’s possible that Mixer’s growth may take time — this happened in August, after all. The battle for online livestream viewership is a new one, and no one knows yet what it will take to pull people away from the market leader. Worth noting that this is exact fight that Epic is in with its efforts to build Epic Games Store in the face of Steam.

While Twitch, YouTube, and Mixer decline month-over-month, Facebook Gaming was the only major platform to see growth.

“It helps to apply a global filter to the data since Facebook is also strong in a lot of overseas markets,” said Nir. “[But] Twitch’s percentage of the pie chart illustrates that it has slightly increased its market share.”