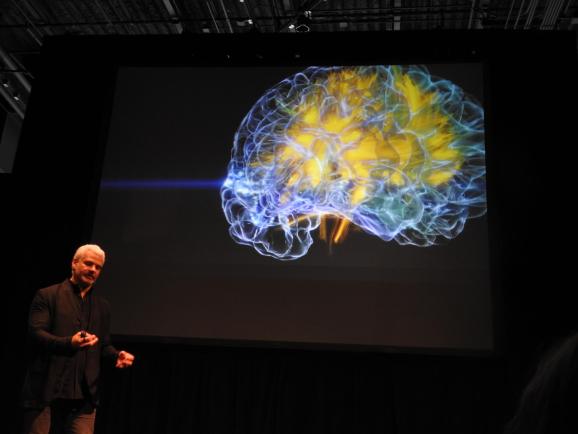 Adam Gazzaley of UCSF shows the effect of VR on your brain.

In a leaked transcript published by The Verge, Facebook CEO Mark Zuckerberg discussed his thoughts on brain-computer interfaces and their potential integration with Facebook’s VR and AR products.

“I think as part of AR and VR, we’ll end up having hand interfaces, we’ll end up having voice, and I think we’ll have a little bit of just direct brain … But we’re going for the non-invasive approach, and, actually, it’s kind of exciting how much progress we’re making.”

Musk’s Neuralink appears to be an invasive form of brain interface, meaning it involves surgery or implants, whereas Zuckerberg made it clear Facebook is focusing on non-invasive technology. He joked about the potential headlines if they focused on the former.

We’re more focused on — I think completely focused on non-invasive. [Laughter] We’re trying to make AR and VR a big thing in the next five years to 10 years … I don’t know, you think Libra is hard to launch. “Facebook wants to perform brain surgery,” I don’t want to see the congressional hearings on that one.

Facebook is in the process of acquiring CTRL Labs, a startup developing a wristband that would read electrical signals passing through the arm to the wrist and fingers. This could allow for a more advanced input system for VR and might provide advantages compared with the camera-based finger tracking system announced for the Oculus Quest. We were impressed when we tried the Quest finger tracking at Oculus Connect last week, but the CTRL Labs technology might potentially be combined with haptic effects — Facebook revealed such a haptic system earlier this year — that would together provide a next generation hand interaction system.

Zuckerberg also discussed a number of other topics and concerns from Facebook employees in the leaked transcripts.