In real-money casino games, be it an establishment in the physical world such as a hotel on the strip  or online, the potential to win or lose money is present from the moment a player “enters” the casino. It’s this danger of the gamble that drives many players back to the tables time and time again.

The online social casino is on a different playing field. Most important, within the confines of social casino gaming, it has no “cash out’ option, eliminating any possibility for real-world gain. As a result, anyone who participates in social casino is aware that if they put money into the game, they won’t get it back, and therefore there is an absolute certainty, that any potential gambling element within the games is entirely phased out.

Without a core element of risk or return on investment, can we really justify labeling these games as gambling?

Something that KamaGames has seen and that we stress strongly and continuously is that social casino players have different motivations for playing casino games than those who partake in real-money gambling. This factors heavily into why we don’t encourage a gambling mentality. Social casino players are attracted to the highly social elements of these apps and are encouraged to interact with one another through the community features that are regularly roll out. For instance, players can not only engage via chat options but also by sending gifts or by transferring dice throws in games like craps. Players are attracted to these apps, in part, because of these features along with their genuine love for the casino-style games.

Just as any sector evolves so will social casino with the industry branching out into new avenues such as sports betting in recent years. Yet, like with the other types of social casino games, this latest venture has no “cash out” feature, with absolutely no chance of winning real-world currency.

KamaGames soft-launched a sports betting feature six months prior to its official announcement.  Launching with 14 different types of sports — such as basketball, volleyball, tennis, and soccer (including the Champions League and the FIFA World Cup) — players were able to place wagers using the in-game chips that they’ve already been rewarded through either daily bonuses or from previous wins. Player reaction was hugely positive, with Pokerist players placing over 30 million individual bets during the soft launch period.

So, why would players opt for a social sports betting platform in lieu of “the real thing”? From our own player research, a bunch of people have an avid interest in live sports and enjoy partaking in the social aspect of sporting events, yet, they want to add another element of involvement in the game without spending money. This is what a social sports betting app delivers.

Similarly to any other social casino game, the success of a social sports betting feature hinges heavily on the importance of social interaction and it is this selling point that KamaGames will focus on when considering our own players in the future.

A loot to be desired

Concern has grown recently that social casino could introduce gambling techniques to impressionable players, however, remember that there are several areas outside of traditional casinos, online gambling, or sports betting where players can experience the rush of a gamble. Yet, despite the obvious real-money spend and risk involved, until recently many haven’t associated these elements of gaming with gambling.

Loot boxes are a consumable virtual item that contains a randomized selection of in-game things, ranging from cosmetics to those that provide a player with a decidedly competitive edge when it comes to winning. They can be acquired through gameplay, but more often — and to great outrage — they’re bought by players who want to advance through the game more quickly.

Games like Fortnite have made loot boxes infamous in the press thanks to the total lack of guarantee on return. No matter the price, the number of purchases made, or how much money players spend on boxes, there is no absolute assurance that players will receive the high quality or a rare item they actually want or that the content will even be equal to or worth more than the value of the money they’ve spent. Essentially — it’s just a good old-fashioned gamble! This resulted in the emergence of several ethical questions around the idea of loot boxes, with many detractors stating that the practice of employing them is allowing developers to take advantage of gamers.

The Netherlands made headlines in 2018 when the Dutch Gaming Authority ruled that some loot boxes, such as those found in popular games FIFA 18, Dota 2 and PUBG, could be classified as gambling. As a result of the ruling, in June 2018, the region enforced a ban on loot boxes. Belgium was also one of the first countries to investigate the gaming mechanic and in 2018, the Belgian Gaming Commission ruled that loot boxes in several games were considered games of chance and therefore constituted gambling.

In a U.K. Digital, Culture, Media, and Sport Committee meeting earlier this year, EA vice president Kerry Hopkins referred to loot boxes as “surprise mechanics,” much to the amusement of the gaming industry as a whole. Hopkins insisted that these mechanics were a joy for gamers who enjoy the element of surprise. In September 2019, the Department for Digital, Culture, Media and Sport Committee went on to recommend that the U.K. Parliament regulate loot boxes as gambling.

The department released a full report focusing on the “immersive and addictive technologies” with a focus on online gaming and loot box mechanics in particular. This report highlighted the hesitation on behalf of game developers to admit any responsibility to define what counts as normal or excessive gameplay within their games along with their reluctance to share data on player behaviors. The report states that much of the evidence they received from gamers themselves critiqued the loot box mechanics in Electronic Arts’ FIFA series and their Ultimate Team mode where “in order to compete, players feel like they need to buy hundreds, if not thousands, of £s worth of packs in order to get the best players.”

Having concluded that loot boxes are designed to exploit potent psychological mechanisms associated with the development and maintenance of gambling-like behaviors the report states, that loot boxes which contain the element of chance should only be made available via in-game credits which should be earned via rewards won through playing the games.

The report outlines its belief that loot boxes which can be bought with real-world currency without disclosing their contents to the buyer beforehand are “games of chance played for money’s worth” and as such recommends that Government bring forward regulations under Section 6 of the Gambling Act 2005 in the next parliamentary session to specify that loot boxes are a game of chance. This recommendation brings the world of gaming and gambling ever-closer.

Even though the loot box mechanic is not featured in any social casino game available at this time, some would still argue that because there is a possibility to spend real-world currency, then it still poses a risk. Yet, in order to be considered gambling, any activity must be comprised of three components. Prize, chance and consideration. Our virtual chips cannot be cashed out for real-money currency or anything of real-world value.

Also worth noting is that studies around both the social casino industry and the gambling industry separately are plentiful and still, there is no proof of a definitive link between the two. So far, those who cite a connection between them are only speculating. There have been a number of experiments to cross-promote players from social to real money casinos which have largely proven unsuccessful with disappointing conversion rates.

The results of a number of research studies which have also looked into a possible tendency of social casino gamers to migrate to real-money gambling are also somewhat limited. For instance, female gamers, which routinely top the list of players in social casino slots, are wildly underrepresented in these studies and focus groups. Some studies also admit to using participants who primarily perceive themselves as gamblers, not gamers.

Finally it should also be noted that the game poker, in whatever form you play it, is not a game of chance. Instead, it requires intense concentration and a significant level of skill to be successful. 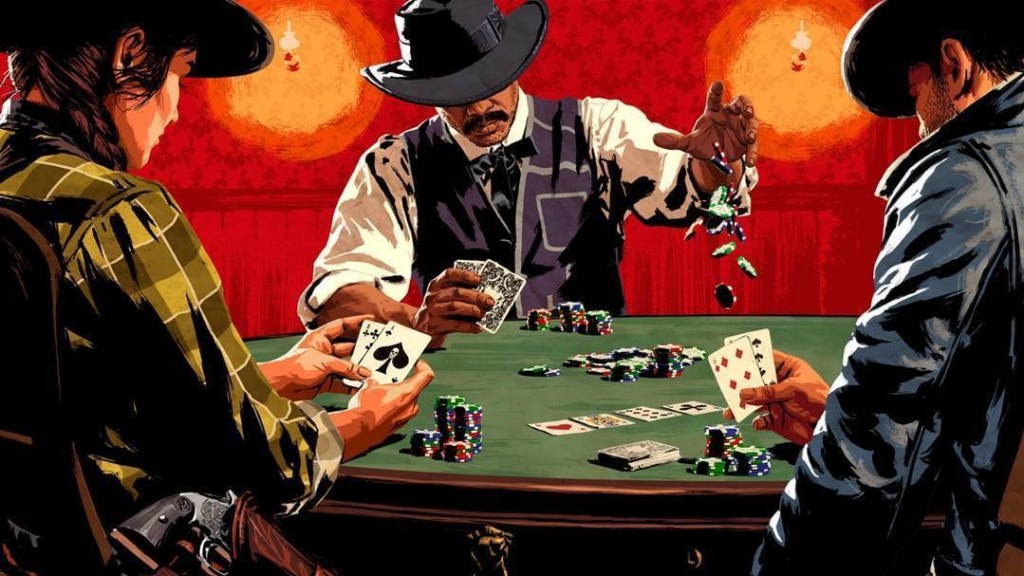 The rest of the online video games industry has begun to take notice of social casino’s appeal. In recent months, Rockstar has introduced social casino elements to two of its titles, Red Dead Online and GTA. Red Dead Online introduced blackjack and poker to the game while the new Diamond Casino in GTA saw a host of casino-style games.

These new additions display all the obvious flashing lights, mechanics and suspense of gambling with the Diamond Casino even embracing the traditional look and feel of a casino, yet, still, they’re not.

Just like with the other social casino games, these online social casinos have zero ‘”cash out” options. While the war on loot boxes rages on, many would like to hook on to the idea that these mechanics are just an extension of loot box mentality, meant to entice impressionable players into the seedy online casino world. Confusing the two would be a mistake when in fact, social casino has proven time and time again that its success is built on far stronger foundations than gambling.

To actually guarantee fair play for all of our players across all of our games, KamaGames decided to invested in our own random number generator, which gives assurance to all players that, not only do we choose not to interfere, but that we simply don’t have the ability to affect the outcome of any game within our app. In-app purchases will not afford you any special skills or allow players to unlock or bypass levels.

This has become even more important as social casino is now beginning to occupy a much more prominent space in gaming than ever before thanks to its recently launched presence in high-profile games such as GTA and Red Dead Online.

Most notably, the social casino genre is actually safeguarding against gambling for impressionable players due to their lack of cash-out option, absence of risk or the unknown involved in microtransactions and the presence of external devices that remove the operator’s ability to interfere with the outcome of a game.

It’s these exact reasons why this part of the industry should be distanced from any discussion around encouraging any type of gambling mentality or comparison to mechanics like loot boxes. For social casino, these crucial details are the difference between gaming and gambling.