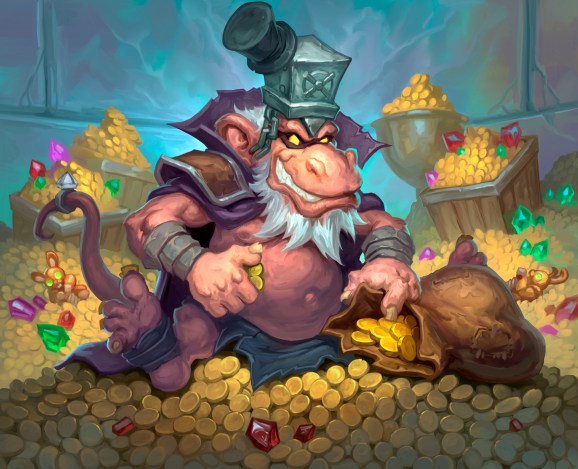 Togwaggle want gold. He doesn't care if it's yours.

Ng Wai “Blitzchung” Chung is a professional Hearthstone player who supported the protests happening in Hong Kong against China during a post-win interview for the Hearthstone Grandmasters tournament on Sunday. Hearthstone publisher Blizzard Entertainment responded with a harsh punishment, banning Blitzchung from the digital card game’s esports for a year and taking his prize money from Grandmasters.

Blizzard also says it will no longer work with the two casters who covered the event, who literally ducked behind their desk when Blitzchung voiced his support for Honk Kong’s protest. Usually, players are banned from Blizzard esports for cheating. But Blitzchung did not cheat.

Blizzard’s message is clear. Don’t criticize the Chinese government, or we’ll punish you.

This echoes what’s been going on in the NBA, which has been trying to make up with China after Houston Rockets general manager Daryl Morey supported the Hong Kong protests on Twitter. The NBA is popular in China — especially the Rockets, thanks to Chinese player Yao Ming’s history with the team — but the government there controls the majority of the country’s media. That’s why they have the power to do things like take the NBA off TV.

Tencent is the largest video game company. The Chinese media conglomerate owns 5% of Activision Blizzard, Blizzard’s corporate parent. In order to release your games in China, you need to work with a Chinese company. For Blizzard also has a partnership with NetEase, a Chinese company that operates its games in the country.

Tencent  also owns the digital streaming rights for the NBA. After Morey’s now-deleted tweet, Tencent announced that it is “temporarily suspending” its NBA preseason broadcasts. That action is what Blizzard is afraid of, be it from NetEase or elsewhere. And while NBA commissioner Adam Silver released a statement today defending its employees’ free speech, Blizzard has done the opposite with its handling of the situation.

Keep China happy, at all costs

Any controversy could result from punishment from China, which would then cost the company money. Hearthstone earns a lot in China. According to mobile market analysts Sensor Tower, 31% of Hearthstone’s mobile spending came from China in 2018. That accounts for about $51 million, higher than the $31.3 million that Hearthstone made in the U.S. on mobile in 2018. That is why Blizzard is willing to do something as morally repugnant as punish a player for supporting the rights of his own country and its people.

And Blizzard can defend itself by saying that Blitzchung violated the rules, even if the rule is vague:

Engaging in any act that, in Blizzard’s sole discretion, brings you into public disrepute, offends a portion or group of the public, or otherwise damages Blizzard image will result in removal from Grandmasters and reduction of the player’s prize total to $0 USD, in addition to other remedies which may be provided for under the Handbook and Blizzard’s Website Terms.

That’s the rule that Blizzard is saying Blitzchung broke. The rule is intentionally vague. Almost any action can “offend a portion or group of the public.”  As the rule itself notes, what exactly draws punishment — or no disciplinary action — is up to “Blizzard’s sole discretion.”

What’s more confusing is why Blizzard is punishing the two broadcasters who just happened to be onscreen during Blitzchung’s remarks. Blizzard has not clarified what rules they broke, but the company still noted that it will no longer work with the two broadcasters. They seem to be guilty through association. I have asked Blizzard to clarify why it will no longer work with them and will update this story if the company responds.

When do we choose to do the right thing over making money?

World politics are complicated, especially for major companies with global brands. China is a giant market. Any major video game company wants a presence there. But that should not come at the cost of forsaking the things we treasure as free people, including democracy, the freedom to protest, and the freedom of speech.

When a player comes into conflict with a country that does not value those freedoms, Blizzard should help to defend them. Instead, Blizzard offered Blitzchung up as a sacrificial lamb, proudly displaying his carcass to China as if to say “look what we did to him for daring to speak against you, so please don’t punish us.”

China is a massive country and economy. But just as the U.S. is subject to criticism, so is China. It doesn’t matter if China doesn’t want to hear them.

Blizzard is a public company with stockholders. Profit will always be its main goal. And as a company, it is able to create its own rules. It has the power to take action such as punishing Blitzchung for his protest. But it is wrong. What further steps would Blizzard take to keep China happy? Is anything off-limits when a single country holds the key to such a large portion of Blizzard’s profits? It looks like anything goes for Blizzard, as long is it stays in China’s good graces.

Blizzard had the chance to defend its player and democracy. Instead, Blizzard chose money. It’s predictable, but it’s still infuriating.