Even though Sony revealed new info about the PlayStation 5 on the same day, Blizzard managed to dominate headlines yesterday after suspending and rescinding prize money from player Ng Wai “Blitzchung” Chung after he supported Hong Kong’s anti-Chinese protests in a post-tournament interview. Today, we’re seeing even more the fallout from this corporate decision.

Blizzard itself has remained silent since its initial statement, which explained its decision to punish Blitzchung and two broadcasters from the tournament on a vague rule that prohibits competitors from any action that “offends a portion or group of the public.” When asked additional questions, Blizzard told GamesBeat that it has no further statements beyond the initial one, but that it will share any future statements with us.

But while Blizzard doesn’t seem to have anything else to say, its players, competitors, and even employees have been reacting to the controversy.

One of the quickest responses came from Gods Unchained, a rival digital card game that’s in beta. It has offered to give Blitzchung the winnings that Blizzard has taken away from him, along with an invitation to its own tournament.

.@Blizzard_Ent just banned @blitzchungHS and stripped his Hearthstone winnings because they care about money more than freedom. We will pay for ALL his lost winnings and a ticket to our $500k tournament: no player should be punished for their beliefs. #freegaming https://t.co/ONvtkG4x9G

This is an obvious bit of grandstanding and smart marketing, but it still shows morale opposition to Blizzard’s actions. It’s also likely going to win Gods Unchained some new players.

A bigger Blizzard competitor, Epic Games, has also come out to not-so-subtly criticize the Hearthstone and Overwatch developer. The Fortnite studio told The Verge that it would not ban players for political speech. Chinese company Tencent owns 5% of Activision Blizzard, but it owns a whopping 40% stake in Epic.

Still, Epic Games founder and CEO Tim Sweeney clarified on Twitter that he is still in control.

Epic is a US company and I’m the controlling shareholder. Tencent is an approximately 40% shareholder, and there are many other shareholders including employees and investors.

Blizzard’s fans are also in revolt. The Reddit page for Hearthstone is littered with players saying that they are deactivating their accounts out of protest and memes poking fun at Blizzard’s appeasement to the Chinese government. These include fan-made cards like the one below by Reddit user denuGeometry. 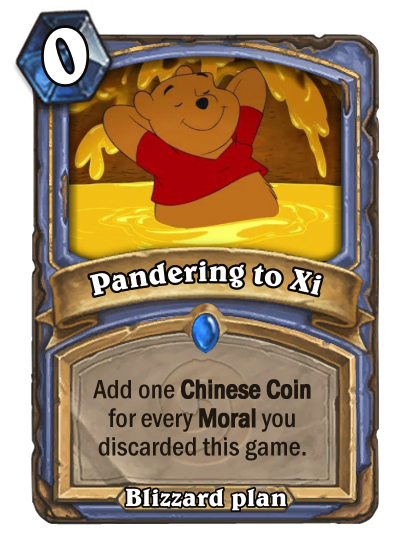 Above: Pandering to Xi.

Blizzard fans are also attempting to make Mei, an Overwatch character who is from China, a pro-Hong Kong symbol by creating images of her wearing gas masks and other Hong Kong and protest-inspired apparel. An example is this art from an anonymous artist shared by Reddit user Hydronair. 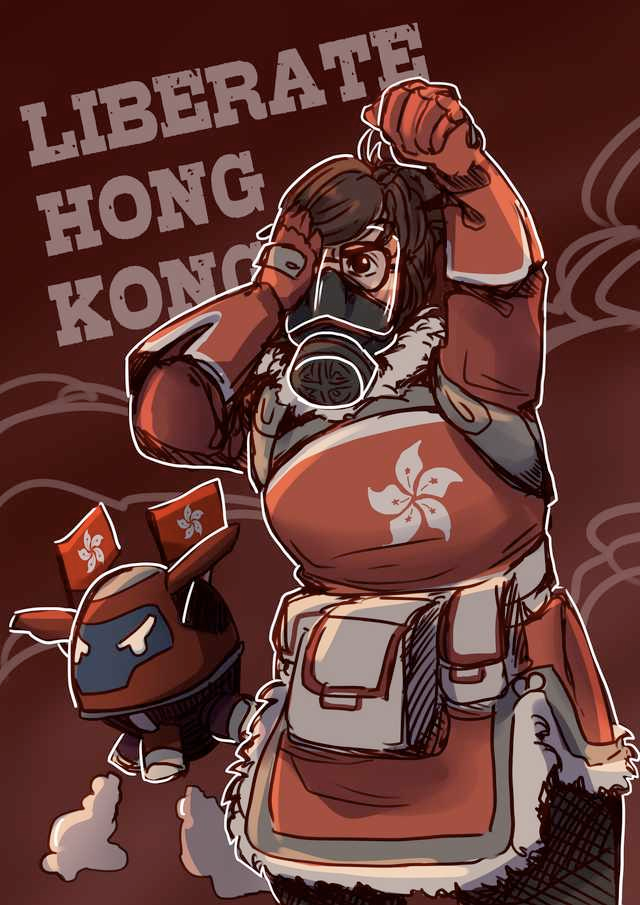 Other Hearthstone players have also taken a stand. A collegiate Hearthstone team from American University held up a sign that read “Free Hong Kong, Boycott Blizz” during a match last night. The team told USGamer (a publication that covers games) that Blizzard hasn’t punished it yet, although they are expecting it.

in tonight's Collegiate Hearthstone championship, American University held up a "Free Hong Kong, boycott Blizzard" during the broadcast, which was quickly cut away by Blizzard pic.twitter.com/Y9eXtLfuGw

Brian Kibler is one of Hearthstone’s most popular streamers and casters. He released a statement today saying that he has told Blizzard that he will not be a caster for the Grandmasters finals at BlizzCon, which starts on November 1 in Anaheim, California.

“I will not be a smiling face on camera that tacitly endorses this decision,” Kibler notes in his statement. “Unless something changes, I will have no involvement in Grandmasters moving forward.”

Even some of Blizzard’s own are finding ways to protest. Former Blizzard employee (and occasional GamesBeat freelance writer) Kevin Hovdestad shared a photo on Twitter showing inscriptions of two of Blizzard’s eight core values covered up by paper.

Not everyone at Blizzard agrees with what happened.

Both the "Think Globally" and "Every Voice Matters" values have been covered up by incensed employees this morning. pic.twitter.com/I7nAYUes6Q

These values appear at a prominent spot on the Blizzard campus, ringing a statue of a wolf-riding orc in the middle of the complex. Some Blizzard employees also gathered around the statue to demonstrate yesterday afternoon, according to a picture posted to the Hearthstone Reddit by user Standingwhk, who says that he is a Blizzard employee. 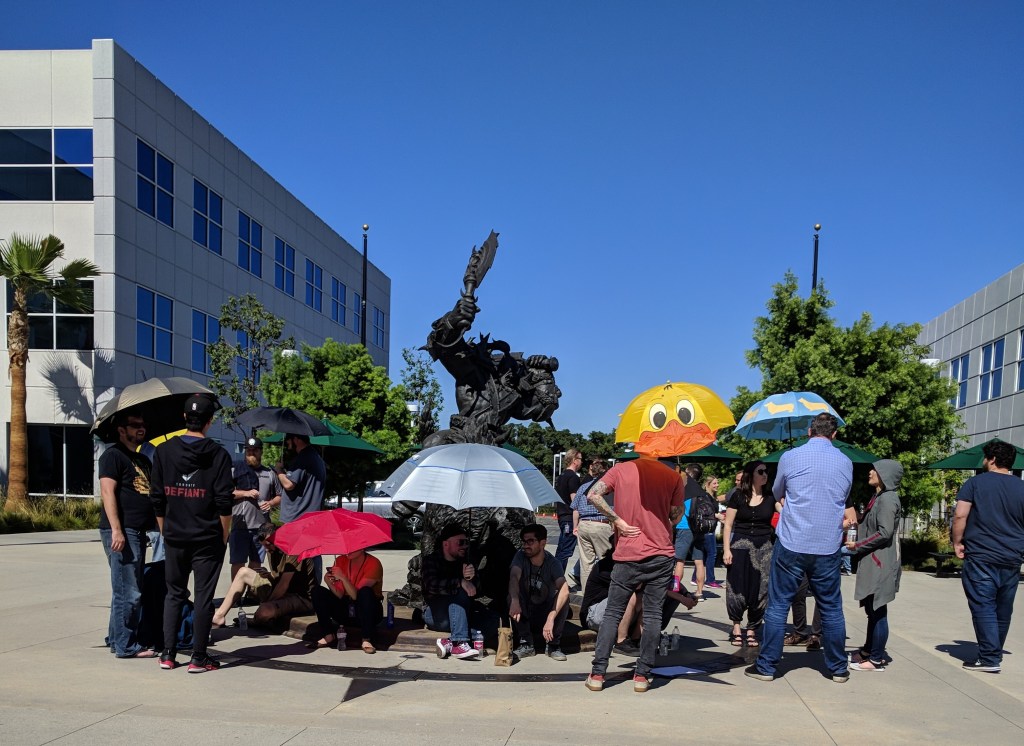 Above: Blizzard employees demonstrating at the campus.

The incident is even getting some mainstream attention. Two U.S. senators have commented on the situation.

Blizzard shows it is willing to humiliate itself to please the Chinese Communist Party. No American company should censor calls for freedom to make a quick buck. https://t.co/rJBeXUiwYS

Recognize what’s happening here. People who don’t live in #China must either self censor or face dismissal & suspensions. China using access to market as leverage to crush free speech globally. Implications of this will be felt long after everyone in U.S. politics today is gone. https://t.co/Cx3tkWc7r6

The story has been covered on major news outlets like the New York Times, NPR, and Bloomberg.

Pressure is mounting on Blizzard as the rest of the world speaks up while it remains silent. BlizzCon is only a few weeks away. It’s supposed to be a fan-centered celebration of the company that also serves as a platform for announcements. But this incident could overshadow the event if Blizzard doesn’t find a way to correct its mistake. If Blizzard decides to remain silent, it’s possible everyone else will get loud and shout in protest during BlizzCon.

Blizzard may want fans to be cheering for Diablo IV, but they would be yelling for Hong Kong instead.