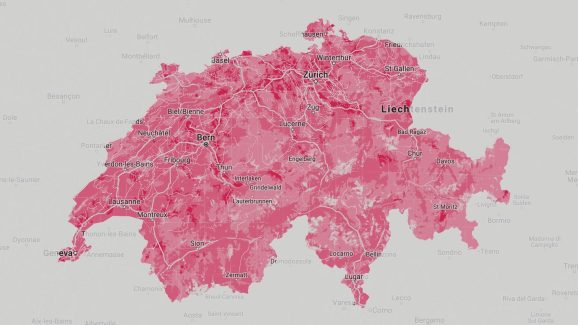 While most carriers in the U.S. initially focused on launching 5G networks based on short-distance millimeter wave hardware, Asian and European carriers have deployed 5G using “sub-6GHz” radio frequencies — longer-range signals that might compromise on speed. But Huawei today announced that it has achieved a 5G download speed milestone without using millimeter wave technology: 3.67 gigabits per second on a live 5G network in Zurich, Switzerland.

The feat was achieved across multiple 5G smartphones connected to a single 5G cell on Swiss carrier Sunrise’s live commercial network, Huawei says, which is to say that the remarkable transfer speed isn’t theoretical or coming from a lab environment. Prior millimeter wave 5G tests run by carriers on live U.S. commercial networks have achieved speeds north of 2Gbps, though independent tests have generally seen low- to mid-1Gbps peaks — wireless speeds that are still much faster than the vast majority of U.S. home broadband connections based on wired hardware.

Notably, Huawei’s 3.67Gbps speed was achieved using 100MHz of “C-Band” spectrum, a radio frequency range spanning 4GHz to 8GHz, as well as multi-user multi-antenna technologies. In the U.S., the FCC is presently looking to open the C-Band for cellular use as one of several viable compromise regions of spectrum that can deliver both raw performance and strong propagation characteristics — assuming an alliance of satellite and TV broadcasting companies already using the frequencies reach an agreement to partially vacate them.

Sunrise has leveraged its partnership with Huawei to offer 5G in over 260 Swiss cities and villages, with a promise of bringing “maximum 5G speeds” to customers throughout the small country. The carrier claimed it was Europe’s first to launch a 5G network, though larger rival Swisscom was the first to actually offer 5G smartphones and 5G network access to paying customers at the beginning of May 2019. Before today, Sunrise promised users peak speeds of 2Gbps, but if today’s news signals anything, it’s that 5G’s numbers will continue to improve over time.