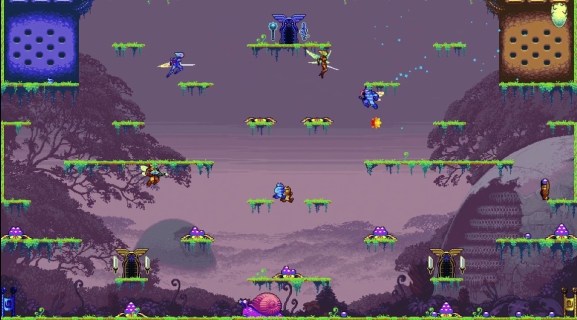 Killer Queen Black is launching today on Nintendo Switch and PC. It’s a port of the 5-on-5 arcade hit Killer Queen that has players working together to achieve one of three victory conditions. Only “port” is not the best word. Black is an adaptation that rebuilds much of the original to make it work on consoles and PC.

Killer Queen has players controlling a queen or one of her drones on each team. Those drones can potentially transform into other units with different capabilities, like the lethal warriors. The goal is to either kill the opponent’s queen three times, fill your team’s hive with berries, or ride a snail slowly across the length of the map. Black takes that action and adds onto it with new maps, unit types, and powerups. It also emulates the communal aspects of the arcade cabinet with features like spectating, cross-platform voice chat, and leaderboards.

So yeah, Black is more of an adaptation, and that distinction is an important one. And it’s one that developer Liquid Bit was cognizant of from the beginning of the project.

“When we started making this game, we specifically decided that we don’t want to compete with Killer Queen Arcade,” Liquid Bit production boss Matt Tesch explained to GamesBeat. “It was a deliberate decision to make a new game that didn’t risk destroying the amazing arcade culture that Killer Queen has helped build, and didn’t negatively impact the business of our arcade customers and community. The health of the arcade community is important to the growth of both games.”

Liquid Bit also recognized that the arcade game wouldn’t translate well to home environments. The cabinet has a huge screen that players stand right in front of. That makes it much easier to keep track of your character in a chaotic battle. That’s a lot tougher on a 6-inch Nintendo Switch screen in handheld mode.

Killer Queen Black is 4-on-4 instead of 5-on-5. It also has an different visual style to help players better track the action. And Tesch explains that the studio didn’t start out with those choices in mind. It came to those solutions as part of the adaptation process.

“It became quickly apparent that we needed to increase the sizes of the player characters, which in turn led to a decrease in the size of the map layouts, and finally a reduction in player count,” said Tesch. “None of that was in the original design and only came about through testing of various prototypes.”

Getting Killer Queen Black to work as a console game and PC game was one of Liquid Bits unexpected challenges. But the studio knew from the start that it would have get creative to make Killer Queen work with online multiplayer.

“The real issue was how to deal with and hide network latency,” said Tesch. “We needed the game to be responsive, and have collisions and kills react as though your playing locally on an arcade while still maintaining a sense of fairness to all players involved.”

Killer Queen Black uses authoritative servers to ensure no one player or team has an advantage. It also uses a “press to attack” design where players must initiate attacks manually. This gives the server a specific moment in time to determine if one player hit another.

And then Liquid Bit turned to Vivox to solve its communication problems. Vivox is a cross-platform tool that enables players to speak to one another.

“Vivox’s cross-platform audio is an essential component of competitive team play in Killer Queen Black,” said Tesch. “We view voice chat as a first-class citizen in the game because of how much more effective competitive teams can be when communicating objectives.”

Killer Queen Black uses the Unity game engine. So did the original Killer Queen, and that familiarity helped in the prototyping process.

But it also means you can expect to see Black on other platforms soon.

Killer Queen Black is out today on Steam and Nintendo Switch.