The Running of the Gnomes is one of the best feel-good-stories in World of Warcraft‘s history. This charity event has players creating new Gnome characters, all with pink hair and tabards, who then run across the game’s massive world together. But this isn’t just for silliness’s sake. The event raises money and awareness for the fight against breast cancer.

GamesBeat: How long has this event been going?

Dravvie : I started the event, I want to say, at the end of Wrath of the Lich King, so for 10 years — this will be the 10th year. It was just sort of an accident.

GamesBeat: How much has it grown since then?

GamesBeat: And now you have official support from Blizzard?

Dravvie : Yeah. I’ve kind of written about it. There’s a lot of documentation. Basically what happened was, as the runs grew over the years — obviously, it got a lot of notice. It would be so big that the servers would slowly get knocked offline. Obviously, I became friends with the server support people and the server technicians, so they knew about it. Blizzard has these events called micro-holidays in the game, where they don’t really award any rewards or anything like that, like their traditional holidays, but they’re something fun that people can do. Blizzard put in a whole micro-holiday that kind of creates a little beach track and stuff based on the race course I created 10 years ago. They provide a lot of support. They advertise it on the launcher and everything else. They’ve been really awesome about the whole thing. 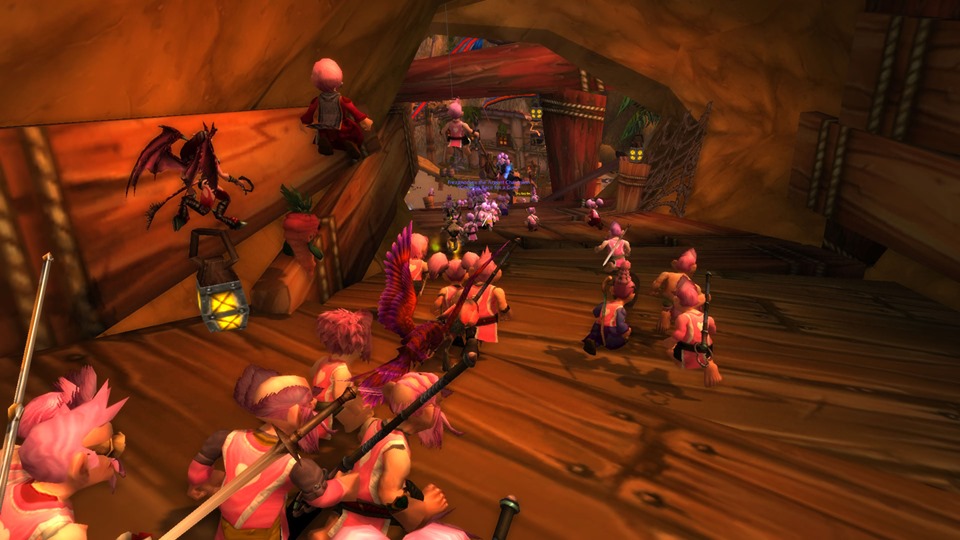 Image Credit: Running of the Gnomes

GamesBeat: Is it cool to see something you made become an official, in-game event?

Dravvie : Yeah, it was really weird. It was surprising. It was really cool. I knew they were doing it before everyone else did. I got an email about it and I had to keep it a really big secret for several months. Then it got data-mined and everyone else found out about it. It was cool to see the whole thing come to life.

GamesBeat: Is this entirely on the retail servers, or are there any events going on on the Classic side?

Dravvie : We’re hosting one on the Classic servers. The gnome run started before Cataclysm, so initially the route was — the unchanged route that would be as it is in Classic, where you start out in the Dwarven starting area and head that way. So we thought it would be fun to hold a classic event, because now they start in their own little Gnome starting area. We decided it would be fun to do that. We’re putting it together so there will be one on the live servers on the 12th and one on the classic servers on the 19th. It gives people some options. We’re also holding a race to see which side gets there the fastest, which side is truly harder.

GamesBeat: Do you have a fundraising goal for this year’s event?

Dravvie : We set it at $5,000, but we’re kind of hoping to double or triple that amount. Honestly, the Pink Fund is really amazing, so we’re hoping to get a ton more money for them. We always set the goal really low.

GamesBeat: The Gnomes make a lot of sense, because of the pink hair and everything. Is that actually your favorite race in the game, or is it just the one that fits the theme of the event the most?

Dravvie : Everybody thinks I play a gnome. I actually play a human warlock in the game. But when we were picking–we initially thought, okay, we’ll make a ton of pink shirts, but then we decided we couldn’t make 35 pink shirts. That seemed like a lot of work. And now, with the size that it’s grown, I’m really glad that we didn’t decide we could make pink shirts for everybody, because I don’t think we can make 7,000 pink shirts every single year. The gnomes are really cute. They’re adorable. It’s really catchy. They’re fun. But yeah, I only play a gnome once a year.

Dravvie : Yeah, I’ve been playing Classic a lot, but I also play live on occasion. It just — I go through cycles. I play on the role-playing realms, so I do a lot of writing and fun adventuring things like that, D&D-style stuff on the live servers. It keeps me busy. Lots of collecting. I do a lot of mount collecting and stuff like that if I get bored with raiding and things like that. I did a lot of mythic raiding until probably Battle for Azeroth, and then I quit.

GamesBeat: What made you interested in a cancer-related charity event in the first place?

Dravvie : Basically what happened was, I was a raid leader in Wrath of the Lich King. Our guild, we would tar our tabards pink and say, hey, wear your pink tabards to the runs, we’ll give you a ticket and you can get an award. I think we were giving out the mechano-choppers, which were kind of a hot commodity back then. We’d do a drawing and we had the little post on our forums where we would say, hey, if you see our members, give them a cheer. We got several other guilds to change up.

It was so popular with our members that we decided we wanted to do something else. We thought we’d put together this fun little run. We made a post on — this was 10 years ago, so we made a post on Livejournal and a few other places, and then one of the artists for WoW had actually made a post too. They got a bunch of people — I don’t know if you remember the guild, but somebody from Big Crits, that reality TV show guild, actually went to their guild and say, hey, look, these people are doing this crazy thing. We got some of those people. Our server actually had one of the top 100 guilds raiding on there, so a bunch of their people came. It really spread really quickly. Everyone said, you guys should do it again. It just spread out from there every year.

GamesBeat: Why did you pick Pink Fund as the charity to support?

Dravvie : Honestly, we’ve changed charities over the year, but I think people should know that we think the Pink Fund is really fitting our idea of doing something small to help somebody really good. Something small adds up to something big, helping people out, even just with small things like electric bills or transportation. I think it really does help. We cover a lot in our FAQs and stuff. But just doing something small, showing up and showing people you car, does really help. It’s a fun little event, and just turning up and showing that you do care–we still do have people who donate per gnome head, which was our initial idea, just donate your spare change to charity per gnome. It does add up. That’s our idea.