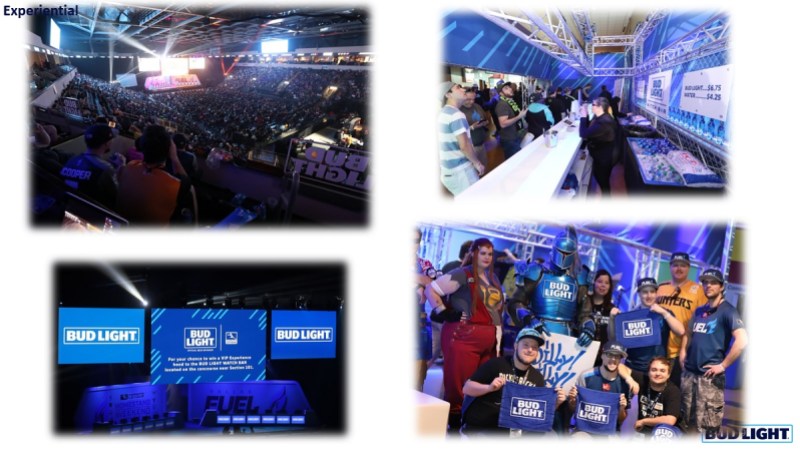 GamesBeat: There was one data point I saw recently from EsportsEarnings.com, talking about how they expect the prize pool from this year to reach something like $300 million. Just the year before it was $160 million. Those are good metrics. Joe, if you have an ask for what you want to get access to as far as data, so that you can take action in the future, what are some things that you’d like to see more of?

Barnes: Every conversation that I have with partners, current or prospective, starts with, “What is the content you’re going to give me so that I can put it on my Twitch channel?” This year we’re programming between two and four nights and week. Next year we’re going to be at seven nights a week. We don’t want traditional sponsorship assets. If you’re going to sell me on being the presenting partner of something, that could be great if you have an awareness problem, but Bud Light has 99 percent awareness.

I don’t need to slap my label anywhere. I need my community to grow. Come to me with content that your fans, who you know way better than I do–come to me with ideas that will add value back to them. We can put it on the Bud Light Twitch channel and give them something really great. That’s how we can continue to grow.

GamesBeat: How do you arrive at the right games you want to have a presence with, and the right streamers as well?

Barnes: I have a really great strategist next to me that helps. But for us it’s a mix. There’s not, within this space, a silver bullet that can solve all of our problems. You have to have diverse assets. Everything we talk about is esports generally, and those numbers are huge, but if you double-click and go title by title, those numbers aren’t as big.

We need to be in multiple spaces. We need to have different titles and types of games. We have a great partnership with Tekken, but it can’t all be fighting games. It has to be NBA2K in the mix. It has to be a bunch of different assets, because then we can tap into different fanbases, which is what makes those esports numbers so large for us.

Saw: The way we work as Endeavor, as a global marketing agency–we work with Bud Light. We work with T-Mobile as well in esports. Then we have other brands we work with, Visa or Marriott, outside of esports. They come to us and say, “How can we get into esports? What games can we go to?”

The evolution of that conversation goes, “Well, I don’t want a red blood game.” They don’t like shooting or violence. “Oh, I also want a sports game.” But EA won’t let us do this and that in their league. “I want to activate in this country.” Ah, but the game we’ve narrowed down on isn’t very big in that country. This path we have to go down is very important, because that’s the number one challenge. I quite literally have some brands who want to spend in esports, and we’ve gone through this step by step guide, and in the end they have nowhere to place their money.

That’s important. Red blood is the biggest factor, and then country by country relevance is a huge factor. Open ecosystems are another one. The Valve open ecosystem is very important, because that allows a lot of people to pop up tournaments and create things for brands to get involved.

The usual place that trickle goes down to, if you’re unable to get in on something great like the Overwatch League, is they’ll end up working with streamers, and a variety of streamers. If you think of streamers who dabble in a little Fortnite, a little first-person shooter, but then also do a lot of sports games, a lot of realtime strategy games, they can be a jack of all trades. These influencers are where a lot of brand money is trickling down to.

I would say that in two years, the amount of money that’s gone into esports and then landed straight at this, what was probably originally lower on the totem pole of esports sponsorship opportunities, it’s really gone down there very quickly. The streamers are doing very well out of it.

GamesBeat: Joe mentioned that Bud Light’s Twitch channel, which has an age gate — how good a solution is having your own custom Twitch channel for other kinds of brands out there that are running into these kinds of problems?

Saw: The work that Anheuser-Busch has done has pioneered leading your own channel. There’s no greater praise than praise from MonteCristo. He’s a hard man to please. That, I think, is fantastic. You heard Joe mention that this year they have this many nights of programming, and next year there will be even more. They want that to continue growing. It shows there is viability in that strategy. Other brands that want to get involved there, though, are going to have to play catch-up in terms of, where are the opportunities they can add value?

GamesBeat: Joe, where are you going in the future?

We’ll look to more activations. The payload is a great idea, going beyond the logo slap to actually activating the event and giving value back to the fans. As we look to the expanding home matches and the big sellouts, we need to be part of it. But we need to be part of it in a new and innovative way that the fans take notice of.

Saw: From Endeavor’s perspective, on a marketing level, we’re looking to help the access piece. Get to that point where, when a brand comes to us and says, “We need a new idea for esports,” we’ve not got this blockage we regularly have in the pipelines. “We have these opportunities for you. This is how we can navigate some of the problems. This is how we can show you ROI.”

Not only for Endeavor, but for me personally as an esports fan, this is a problem that’s a personal passion point to solve. We need, as an industry, to balance our books. We need to welcome brands and create opportunities for brands. That’s something we’re striving as a team to be continually evolving. What are the ways that brands get in the space? How do they justify their involvement in the space. How can we get ROI? 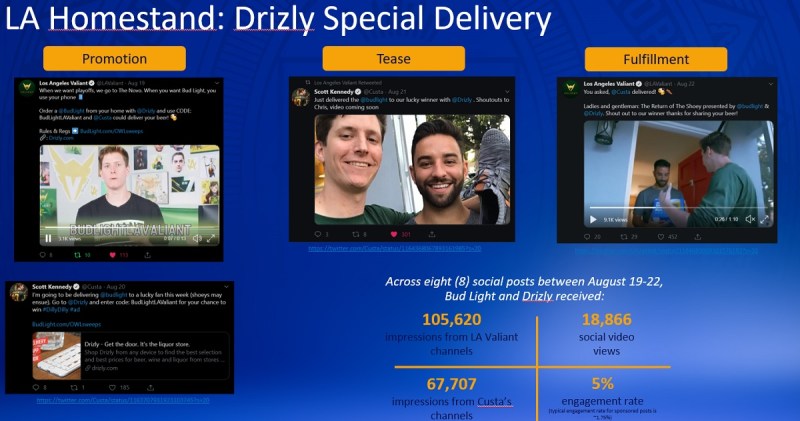 Above: Anheuser-Busch is experimenting with esports marketing.

GamesBeat: Have you run into anything that you’d call, among the smaller games, something like the golf of esports? Something with a very desirable demographic, if not the biggest audience in the world? Does such a thing exist?

Barnes: It probably does. I haven’t seen it yet. For us we’re trying to hit the sweet spot. The target audience is 21 to 27. This sport is the youngest possible. We just have to make sure it skews above 21. For that, it’s perfect for us. I would almost take a step back and–the golf for Bud Light would be esports, rather than looking within the esports industry.

Question: Something that’s caused a lot of constriction is demographics, the ages within esports, as far as making game video content at scale. Are you doing anything from an analysis perspective, since you have your own channel — are you doing those deep dives to know, “Hey, I know that 30 percent of my audience is tuning into Fortnite content”? Are those shows providing a way to dig into those demographics and identify games, identify influencers that make for successful game video content?

Saw: First, I’ll whine at Justin Dellario to ask for more of those opportunities. Second, you raise a good point in terms of activating across a genre rather than a single channel. That’s a big factor. When you look at–”Hey, I’m advertising against League X.” Well, that means you’re getting the League X audience, not the esports audience. You’re not getting the streamers or the amateurs. You’re getting the pro piece.

Something we tell brands is that even with the limiting factor we have on the data that’s available — and Anheuser-Busch is perfect at this, if you look at activations around Overwatch all the way to Tekken — you need to be activating across esports and finding a way to get the entire audience. Think of esports as one giant Venn diagram of audiences that overlap in different places. That’s how you have to attack it from a strategy perspective. 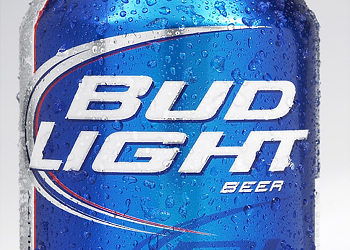 Above: Bud Light is pushing into esports as well.

Question: From a measurement perspective, for Bud Light, you guys I’m sure have a television budget, a digital budget. Is there’s a metric under one of those two that would make you more willing to spend in this space?

Barnes: What we’re looking at as a brand, if you take a step back — if we look at the TV metrics, the numbers there, it’s great that if I air during Sunday night football, I’m going to reach 30 percent of America. But do those people pay attention? Do they want to see my content? Or was I just interrupting, and they actually have a bad taste in their mouth around Bud Light?

When we look at these engagements, the number one priority–if people are actively engaging with the brand, we’re going to throw more money at that to keep this cumulative effect going, because whatever we’re doing is working.

Question: How do you track, whether it’s a logo slap or an engagement or these activations — how do you go down the path where you convert it into interest from the audience?

Barnes: We look at varied factors. We do have agencies like Stuart and others that can do assessments for us. We know the value of signage in an NFL stadium. We know the value of putting your logo by an NFL shield. We have all that data. When we’re making these decisions, we need to look at what the fans are engaging with, to this last point. That’s the investment decision. If fans are engaging and it’s growing and it’s working, that’s where our money is going to go.