Simon Segars, CEO of the Cambridge, England-based Arm, took the stage at last week’s Arm TechCon 2019 event in San Jose, California to tell the company’s ecosystem of partners about its future plans.

Arm designs the underlying architecture and semiconductor chip components for its partners, who license the technology and put it into a wide range of chips that drive just about everything electronic, from smart doorbells to energy-efficient Arm-based servers. Arm’s partners have shipped more than 150 billion chips to date, and in the next two years Segars expects 50 billion more to ship.

The world is undergoing nothing less than an electronics revolution, and Arm is at the center of it. The internet of things — everyday devices that are smart and connected — could reach more than a trillion units by 2035, Segars said.

These dynamics attracted Japan’s SoftBank and led to its $31 billion acquisition of Arm in 2016. SoftBank CEO Masayoshi Son said he was readying his company for the Singularity, or the day when AI exceeds the collective intelligence of humanity, in a few decades. But last year Son acknowledged that he might spin off Arm in an initial public offering, possibly within five years (by 2023).

Segars is trying to run the company as usual in the meantime, with a near-doubling of the company’s staff to more than 6,500 people. At TechCon, he announced that Arm would fend off competition by enabling custom instructions for embedded centralized processing units (CPUs) to give chipmakers more flexibility in a changing world.

I sat down with a group of reporters at Arm TechCon 2019 last week to talk with Segars in a wide-ranging interview. We discussed the possible IPO, the custom instructions, Arm’s moves in IoT, its interest in security, and the state of competition.

This interview has been edited for length and clarity, and questions have been reordered by theme. 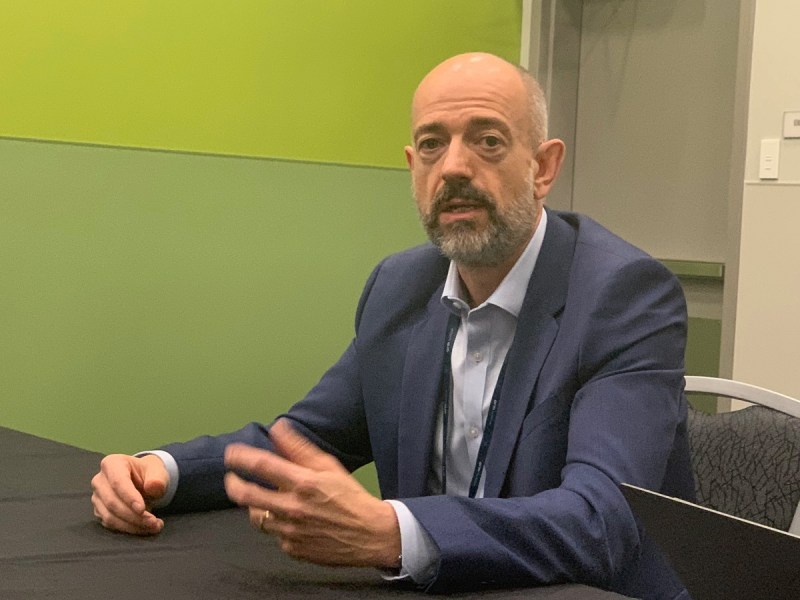 Above: Simon Segars, Arm CEO, at a press group interview at Arm TechCon 2019.

Question: I talked to a couple of analysts who felt like the custom instructions were a nod toward the competition from RISC-V.

Simon Segars: The way we’re looking at it is that — chip design is evolving in multiple ways in parallel. You have consolidation going on amongst big chip companies, producing large players who are investing on the leading edge. They have the size and scale to build very complex devices. You have some OEMs who want to build chips. You have various smaller companies who are looking at how to create things much more optimized for specific applications, especially in this world of IoT. There’s a range of different solutions out there for how people can extend the capability of what an ARM processor does based on the workload.

Our inclusion of the custom instructions is based on feedback from the market. In some areas having a dedicated accelerator sitting in the memory map or sitting as a co-processor, that works very well. There are some other applications where doing that final optimization can make a big difference. We’ve listened to the market. We’ve thought long and hard about how we add that flexibility and maintain the benefits we’ve had for our entire history of standardization and that big software ecosystem we’ve developed. This seems like a good way to address all those needs. It’s really driven by the needs of the market more than anything else.

Question: How should we visualize what this new customization ability addresses?

Segars: The target market is actually quite broad. When you look at the biggest shippers of ARM-based microcontrollers today, it’s companies that have been around a long time. They have broad portfolios of microcontrollers where they’re taking, say, a Cortex-M3, M33, whatever, and building portfolios around them that produce hundreds of SKUs. They ship development boards. They ship a lot of software support to go with that, so that as a developer you have this library of functions prebuilt for you that you can integrate together in software, whatever application in particular you want to build.

I anticipate companies looking at particular markets, like motor control. We have these libraries today that are implemented using special ARM instructions. If, as we implement our Cortex-M33, we can add some special feature, maybe we can halve the run time of that library that does some operation to work out where to take the motor to next. Companies like that are going to do those optimizations and build them into the board support packages that they create.

There will be some others in the startup category that are going to focus on one specific thing, as opposed to a broad portfolio of MCUs that they’re largely shipping to distributors. They might have some market in mind where adding some instructions can, again, just optimize for that. Again, I think it’s going to be quite broadly applicable. We’re going to see big, classic MCU shippers adopting it, and we’re going to see smaller startups.

Question: How do you add custom instructions and still maintain the ecosystem?

We’re not enabling people to strip stuff out and risk having a C compiler spit out code that won’t work. There’s still that compatibility with the architecture. This is an opportunity to add things for — the regular code it’s never going to touch, but specific application optimizations could take advantage of this in a particular vendor’s set of support tools.

That isn’t very different, at the chip level, from what we have today. There may be, in an MCU, some accelerator that’s sitting completely outside the core. It sits in a memory map. Again, one of these library routines might call upon it to do something. If that accelerator isn’t there in Vendor B’s chip, it’s not going to do anything. Same principle applies here, but it’s more tightly integrated. For some functions we think that’s going to deliver significant performance uplift for very small overhead in silicon. That’s much more efficient than building a completely separate accelerator.

Question: Should we expect the majority of customers to do custom instructions?

Segars: No, I don’t think the majority. Like any instruction set check, when we look at the architecture — we’re going to put this in. What’s this used for? Who is going to use it? How do we support it? It’s a significant step to add something into the architecture, to change it. I think you’ll see companies think long and hard about it. Again, back to this mix of partners we have, bigger companies maybe standardize around a few optimizations, make sure there’s great support for it, and then you’ll have some small guys that focus on one thing. But I don’t think you’re going to suddenly see a million and one different variations. 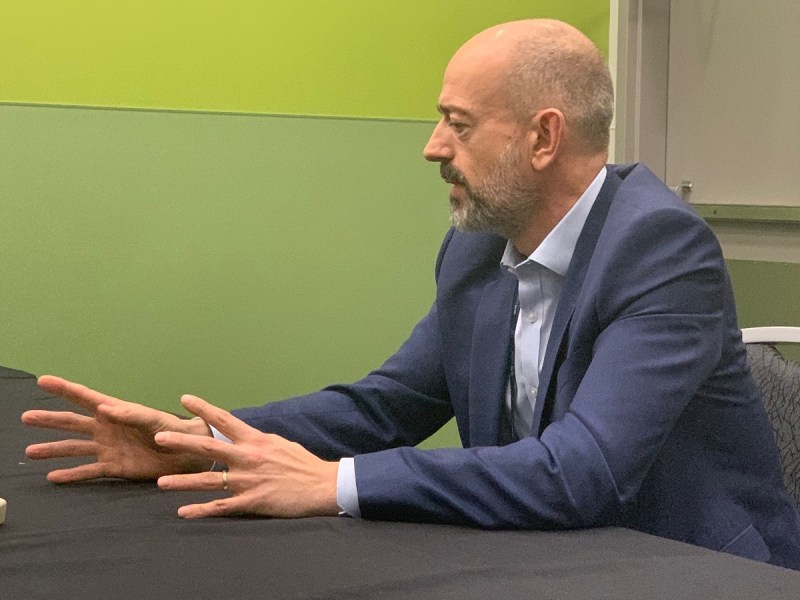 Above: Simon Segars expects a trillion internet of things devices by 2035.

Question: Do you have any updates about a new IPO?

Segars: At last year’s SoftBank AGM [annual general meeting], Masa said that in about five years, we’ll have an IPO of Arm. That’s not a hard and fast ruling, where on July 10, 2023 we’ll have an IPO. It’s not cast in stone.

What we’re doing is investing to make Arm a more valuable company. We’re investing to do that through the development of technologies, the development of our ecosystem, to ensure that we can grow with the growing opportunity that’s represented by IoT and AI and 5G and autonomous vehicles and continued growth in mobile. I think there are a number of these technologies that will drive growth for the semiconductor industry, and since we supply into that, we want to make sure we’re providing the building blocks for chip companies that want to serve those markets.

It feels to me that in that sort of 2023 time frame, we should be seeing the real fruits of that investment. We should be seeing revenues take off from the sale of those chips, and that should be flowing to the profitability of ARM. If all that comes together and the conditions are right, that would be a good time to have an IPO of Arm and release some of that back.

Question: You mentioned driving growth, having a mandate from SoftBank to drive growth and push forward as fast as you possibly can, and not be as concerned about quarterly earnings and so forth. What does that mean for Arm in terms of the overall attitude as you continue to drive growth?

Segars: For now, nothing has changed. We’ve been investing our profits in growing the company. Since the acquisition — as you know, prior to, we were a very profitable company. We operated with roughly 50% margins. We’ve taken that down significantly and invested our profitability in our growth to develop this long-term road map of compute solutions for these growing markets. None of that has changed relative to anything that’s gone on in the rest of the SoftBank portfolio. For us we’re continuing on that mission. It’s business as usual.

If and when Arm becomes a public company, the stake in the ground is 2023. That’s a while off. We need to have gone through this phase of investment, seeing the growth in the end markets, seeing how that growth in top-line converts and profitability — a lot of things need to fall into place for us to be in the right shape to go back to the public markets. We’re on a runway to do that. That’s not changed based on anything else that’s going on across the board.

Question: If you were to relist as a public company, where would you might like to do it?

Segars: It’s not something we’re spending any time as a board discussing. It’s still a long way away. If we were to relist, it would be in a market that takes a long-term view on technology. We had a great time being a public company previously, with a primary listing in London and a secondary listing in the U.S. The world is a different place from what it was in 1998 when we went public and that choice was made. We’ll determine how much closer.

Question: As a board member of SoftBank, can I ask you about the recent results of the investment in the Vision Fund?

The SoftBank group board, as you can imagine, is pretty interesting, and it’s a fascinating experience for me being part of that. The Vision Fund is going to do what it needs to do.