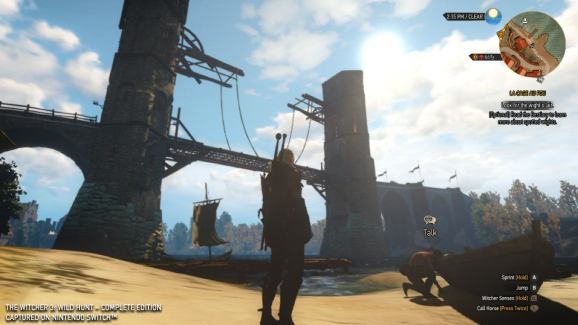 The Witcher 3 on Nintendo Switch.

I have a decent PC that can play The Witcher 3: Wild Hunt at max settings and more than 60 frames per second. But what good does that do me when I’m waiting for my drink at Dunkin’ Donuts? There’s a photography adage that says: “The best camera is the one you have with you.” And Nintendo Switch is proving that’s also true for video games.

And due to the hybrid home/portable nature of the Switch, it’s likely that it’s the only device you’ll have in many situations.

Sure, compared to PC, Xbox One, or PlayStation 4, Witcher 3 on Switch is fuzzier and less detailed. It looks noticeably worse. But those side-by-side comparisons don’t really make sense in the real world. It doesn’t matter to me that Witcher 3 looks better on PS4 if I want to play it on a handheld in bed. Or if I’m commuting and can’t comfortable pull out an Xbox One.

All that matters is Witcher 3 on Switch works

Comparing The Witcher 3 on Switch to other platforms doesn’t make a lot of sense. The more useful measurement is whether or not the game is playable. It runs at a lower resolution and the world has fewer effects and objects. But does that ruin the experience? No.

In my experience, The Witcher 3 has never fallen below a minimum playable threshold. You can still make out enemies in combat even when the resolution falls below 540p. And you lose nothing from the story sequences.

This is still the same game as always. And if having it on a handheld means you’ll actually play it, then this is the version you should get. Because it doesn’t matter how beautiful and smooth a game can look on a platform that you can’t actually fit into your life.