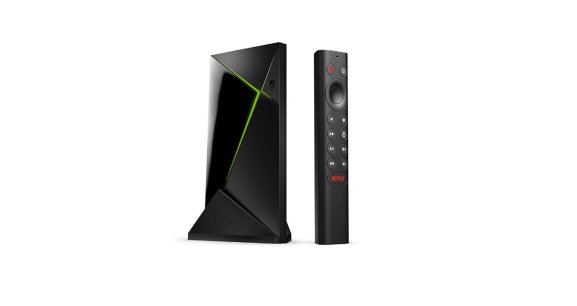 The Shield TV Pro from Nvidia with a new controller and improved Tegra X1.

The Nvidia Shield TV is one of my favorite devices. It’s an Android-powered set-top box that is great for streaming media from Netflix, Amazon, and Plex. It’s also a great device for emulating classic games and streaming games from Nvidia’s GeForce Now cloud service. But the original Shield TV came out in 2015, so it seems like a good time for an update. And it looks like that’s exactly what we’re getting in the Nvidia Shield TV Pro that leaked on Amazon today (via Android Authority).

Nvidia has not announced the new device yet, and Amazon has since removed the listing. But the posting did include several details about what to expect. The Nvidia Shield TV Pro will launch October 28 for $200. The device is getting a new remote control. And it once again features the Tegra X1 processor, but it is an upgraded version that has 25% better performance.

The Nvidia Shield TV Pro is a slight refresh

That new Tegra X1 is likely similar to the custom X1 that Nvidia and Nintendo are using in the Switch Lite and the updated Switch with better battery life. But since the Shield TV Pro is always plugged in, Nvidia is using the increased efficiency to improve performance. This should give you a more responsive interface, faster 4K video playback, and better performance in games. I’m especially interested to see how the Pro handles the Dolphin emulator for GameCube games.

But outside of the chip and the remote, this definitely looks like a revision. The Shield’s design looks the same. It has 4GB of RAM and storage that starts at 16GB, just like the original. So this definitely isn’t the Shield TV 2. Nvidia does have more powerful Tegra chips, but the Shield doesn’t really need that much more power. The X1 can handle any Android game, and you would stream more powerful PC games from the cloud.

But it’s good to see that Nvidia isn’t abandoning the Shield. It’s a beloved product for many people who don’t want to rely on the slow interfaces of “smart” TVs. And the Shield TV Pro should improve the life of cord cutters for the next several years.