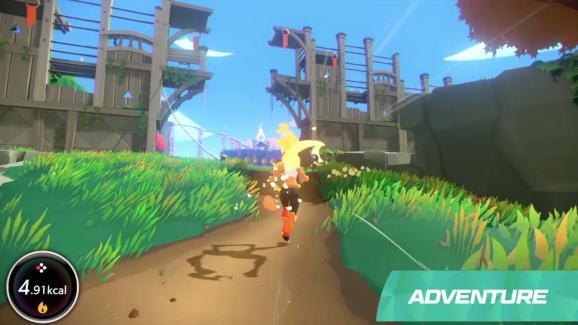 Nintendo has a history of combining exercise and video games. And Ring Fit Adventure is the most recent entry in that lineage. Like Wii Fit before it, Ring Fit Adventure comes with a specialized peripheral. The Ring-Con is a circular resistant band that you might have encountered if you’ve ever done Pilates or yoga. It both tracks your movements and provides a method of performing strength exercises.

Unlike Wii Fit, however, Ring Fit Adventure is much more like a traditional game. It is a role-playing game that you play by running in place and aiming the Ring-Con. In battles, you perform exercises to defeat enemies. The idea is that you may forget that you’re working out if you focus on the action instead of the squats. But I’m not convinced that it accomplishes that goal.

Ring Fit Adventure is more of a game than a lot of the Wii-era takes on fitness. Wii Fit is like a digital trainer. This game puts a facade over the electronic gym to help distract you. And I think that is effective … to a point.

I really enjoy the running sections of Ring Fit Adventure. During these areas, you move through the world by running in place. You can also interact with objects or do floating jumps by doing different maneuvers with the Ring-Con.

The illusion breaks somewhat during battles. In these moments, you pick different exercises from a list and do them to attack the opponents. You eventually unlock a ton of different offensives options (exercises), and that variety helps to keep things interesting.

And since this is an exercise RPG, it also has several meta layers to string you along. You can level up to get more powerful and to move through a skill tree. And this is where Ring Fit Adventure is at its best. These familiar gaming elements encouraged me to keep my workout sessions going longer. If I was close to gaining another level, I would start the next stage to get those experience points, for example.

I really like working out with the Ring-Con. The band makes Ring Fit Adventure feel more like a full-body workout. Squeezing the band or pulling on it is a great way to challenge the muscles in your arms, shoulders, back, and chest. It’s even a decent tool for working out the abdomen when the battles have you hold it against your midsection to fend off attacks.

But none of this would work if the RingCon was cheap or flimsy, and it isn’t. It is a quality piece of equipment. You can squeeze it hard, and the resistance will remain firm and consistent. It helps that the motion tracking — enabled by slotting the Joy-Con into the Ring-Con — also seems very accurate.

It’s difficult to get into ‘the zone’

I’m not convinced that people who hate exercising should get Ring Fit Adventure.

The problem is that I rarely ever felt like I was in “the zone.” That’s the zen state where you get so into an activity that you can exercise for an extended period of time even if your muscles are screaming. People who run a lot get into this state. But the rest of us need some help to achieve that heightened level, and that’s what I want from something like Ring Fit Adventure. The gaming layer sometimes makes me want to keep going for another round, but I never suddenly emerge from the game after working out for 45 minutes longer than I intended.

And I’ve played games that have put me into that zone. Dance Dance Revolution is great at that. More recently, VR Boxing and Beat Saber have made it easier than ever to achieve that exercising zen. In those games, I can feel myself pushing through my personal barriers because the action is so good at drawing me in.

Ring Fit Adventure has nothing like that. And that’s a disappointment.

Ring Fit Adventure is probably a smart way to exercise for some people, but not for me. I know that I’ll get much better results from combining different VR exercise games. That’s a shame because I really like the way the RingCon feels. I also enjoy leveling up and running through the environment.

But the core mission of Ring Fit Adventure is to make you forget that you’re exercising, and I think it’s only partially successful at that.

Ring Fit Adventure is out October 18 for $80. Nintendo provided a copy of the game for the purpose of this review.