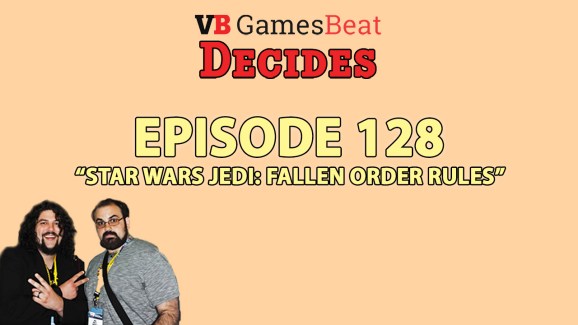 It’s time to get excited for Star Wars Jedi: Fallen Order, because it turns out that it is good. On this week’s episode of GamesBeat Decides, co-host and reviews editor Mike Minotti talks about playing the first few hours of Respawn’s adventure. And he thinks this could end up as one of the best Star Wars games ever. Meanwhile, fellow co-host and PC gaming editor Jeff Grubb has spent some time with sci-fi black metal platformer Valfaris and Switch’s Ring Fit Adventure.

In the news, the GamesBeat Decides crew talks about the latest developments with Blizzard, Hong Kong, and China. The team also looked at the monthly NPD report, which publisher Take-Two Interactive dominated with NBA 2K20 and Borderlands 3. And then what is going on with Riot Games and the Analogue Pocket? Join us, won’t you?