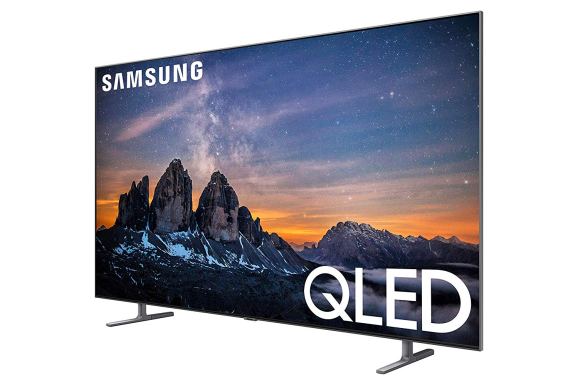 If you are looking for a new 4K TV that is great for video and excels at gaming, the Samsung Q80R has got it where it counts. It is packing some features you won’t find in any other devices, and it’s just an all-around solid set.

Sure, LG’s C9 is an OLED powerhouse that is great at everything, but it’s still relatively expensive. You could also go with a Sony or TCL, but they are better at movies and television than games. Samsung is putting gaming first, and that’s obvious in the Q80R.

If you are gaming on a TV, it’s important that it feels responsive. And the Q80R delivers that with an input from 15-to-17ms. That puts it well below the noticeable threshold for most people. It’s also just under the duration of a single frame at 60 frames per second. Even most pro fighting game players wouldn’t notice that.

You need to switch to gaming mode to reduce the lag on the Q80R. This switches off a lot of the image processing. But it still produces a sharp and accurate image.

But with the Q80R, you don’t really need to worry too much about turning on gaming mode. The display has automatic low-latency functionality that switches into game mode whenever you begin playing a game.

And then you also get support for Freesync, which is AMD’s version of variable refresh rate. This technology syncs the refresh rate of your display and your GPU. This eliminates tearing without introducing extra input latency. You’ll need a recent AMD video card in a PC or an Xbox One to take advantage of this feature.

At 1080p or 1440p, Freesync works from below 20 fps up to 120 fps. That is a huge and impressive range, and it ensures you always get a responsive and clean image. That range contracts sharply to just 48 fps to 60 fps at 4K, though. If a game falls below 48 fps at 4K, Freesync won’t do anything.

Still, this is a great feature for anyone playing games on an Xbox One X or PC. You may just want to set your resolution to 1440p, which is almost indistinguishable from 4K if you’re sitting 10 feet away.

Speaking of framerates, the Q80R has a native refresh rate of 120Hz. Your console is not really going to take advantage of that, but a PC can. And while it has HDMI 2.1 with highspeed data throughput, it doesn’t support 120Hz@4K. Instead, you only get 120Hz@2.5K and under. But that means you can get 120 frames per second while running games at 1440p, which I would prefer because it’s difficult to even get a 60fps at 4K.

This super-smooth framerate is great for competitive games — although I’ll take it in any game where I can get it.

Samsung also has some pretty good local dimming, which enables some sharp differences in contrast. You’ll notice light leaking around bright objects because of the sizable local-dimming zones. But Samsung does a good job of minimizing that with smart software — although, it’s nearly as good as an OLED or a TV with significantly more local-dimming zones.

Great picture even in a bright room

The Q80R’s secret best feature, however, is its glare-resistant screen. Even in a bright room, you’ll get almost no reflections on the display. This ensures that you can see every detail in a game even in the middle of the day.

Samsung’s TV outperforms every other display in this category.

Samsung’s Q80R supports HDR10 and HDR10+, and it definitely gets super-bright. Peak brightness goes over the 1,000 nits threshold, which is a measurement of luminescence within a certain surface area. But while the brightness is impressive, the contrast doesn’t pop as much as I want from HDR.

The QLED panel can portray blacks and whites really well on their own. But when it has to deal with both at the same time, the HDR effect comes up short. In those kinds of scenes, the blacks can feel too dark and the highlights seem washed out.

But this only happens in the most extreme circumstances.

A.I. assistants are popular. Or, should I say that Alexa and maybe Google are popular? And you can use those smart platforms to control the Q80R. I’ve had some issues with that where Google Home won’t properly recognize that I’m talking about the TV when I say its name. But that could be a Google issue.

My bigger problem is with Bixby, which is Samsung’s digital assistant. It stinks, and it often thinks that me or my wife are talking to it. And we are never trying to talk to Bixby. I eventually turned the feature off. Before that, however, Bixby would suddenly pause the audio for a show or movie to try to hear what we were saying. It was very frustrating.

So yeah, turn that off unless you have somehow found yourself living within the Bixby ecosystem.

At 55 inches, the Samsung Q80R isn’t the best deal. You can get it for $1,600, but the LG C9 is only $1,500. The C9 has better HDR, perfect local dimming (OLED is self-illuminating), and its gaming mode has similar input lag. At that size, the best reason to still go for the Samsung is to get Freesync for use with an Xbox One X or AMD GPU.

The Samsung Q80R QLED TV is available now starting at $1,600 for the 55-inch model. Samsung lent us a sample unit for the purpose of this review.