As I played The Outer Worlds, I kept thinking about the Alien films. The two share a dystopian future in which corporations wield far too much power over the galaxy. But where Alien uses terror and bloodthirsty monsters to hammer home its message, Obsidian Entertainment and The Private Division deploy a quick wit and sharp satire to show what happens when mega-conglomerates, not governments, rule the final frontier.

The Outer Worlds is a role-playing game that comes out October 25 for the PC, PlayStation 4, and Xbox One. I reviewed it on the PS4, and I found a wickedly funny skewering of corporations. It’s a RPG with smart character-building and some satisfying dungeon design. Combat could be better, and the world is full of people who look like they were cloned from the same half-dozen archetypes. This didn’t stop me from enjoying it, and I look forward to returning to it as soon as I finish writing this review.

The best part of The Outer Worlds is its humor. It’s sharp. Some of its jokes are easy one-liners dealing with your current situations, but most of it goes deeper, either developing into short bits (such as one about the use of serial commas, one that I felt was made just for me) or into a recurring theme of roasting corporate culture.

The humor starts early, turning a joke about bureaucrats into part of building your character. You find people all over the Halcyon sector (these are the colonies in The Outer Worlds’ corner of space) hewing to corporate lingo and jingles. The de facto leader of an abandoned colony speaks like he’s still filling out TPS reports for his bosses. The names of many of the corporations — such as Spacer’s Choice (does this ring a bell?) or Auntie Cleo (its logo reminds me of Mom from Futurama) — are little jokes. Later, a Spacer’s Choice employee sounds like a pitchman even after you save them from the jaws of hungry raptidons (one of the aggressive fauna standing in the way of corporate expansion). Another worker wears a moon-shaped hat with a ridiculous face on it, and he tells you in hushed, terrified tones that “you’d never would ask if you knew what it was like in here” when you ask if you can buy the head wear from him. 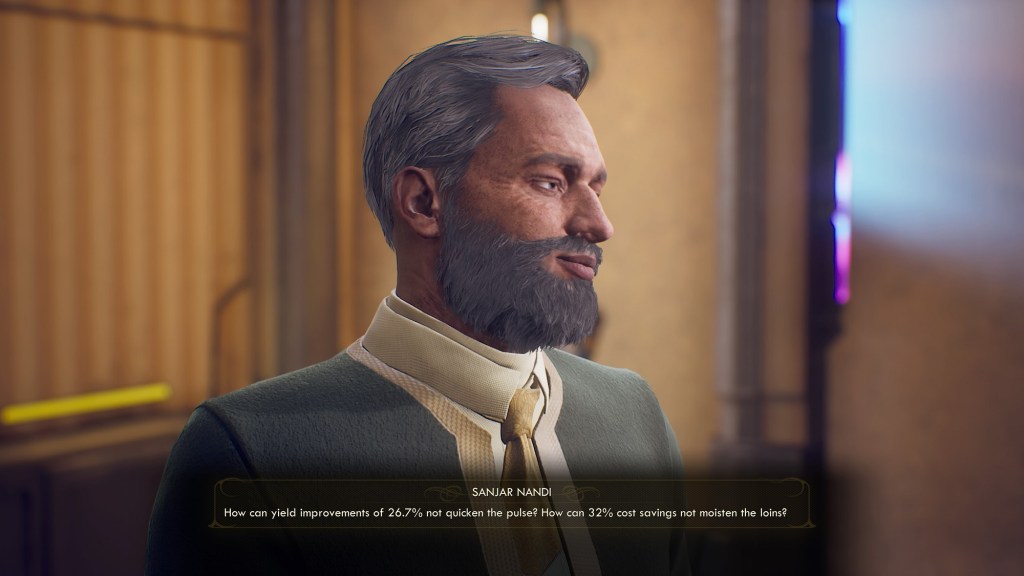 Or the researcher who discovers that raptidon enzymes can become a diet toothpaste thanks to the power of science … and asks you to help him save his notes from a facility overrun by the beasts and ne’er-do-wells.

This comes across as a commentary on those bad bosses we’ve all had in corporations, making one inane and ill-advised decision after another, and those poor sods (namely us) that have to deal with them. You’ll emphasize with some of them, and others will leave you shaking your heads at their stupidity.

And in the background, The Board — a group made up of leaders from each of the corporations in this sector — looms over everything, as people bend backward to please their corporate overlords or spit in their faces as they eek out a living while trying to pull free of their influence. For me, The Board shows the dark place some of the humor comes from.

I’ve long preferred putting points into stats/stat blocks to RPGs that just open up new powers as you advance (hi, Diablo III). The Outer Worlds gives you blocks of stats, such as Melee, Ranged, Defense, and Dialogue, and you pump them up as you see fit. I put a great deal of points into Dialogue, giving me options such as Lie and Persuade when talking to people. Dialogue options are one of my favorite aspects of RPG design, and seeing how these change situations — or better and worse — is satisfying. And it’s key to the some fantastic interactions. Boosting Tech helps you pick locks, deal with computers, and other engineering feats.

You also get Perks every few levels, which enhance your combat skills or other abilities. Other Perks reduce the cooldowns of your companions, give your discounts at vending machines, or help you carry more. Your companions get Perks as well. 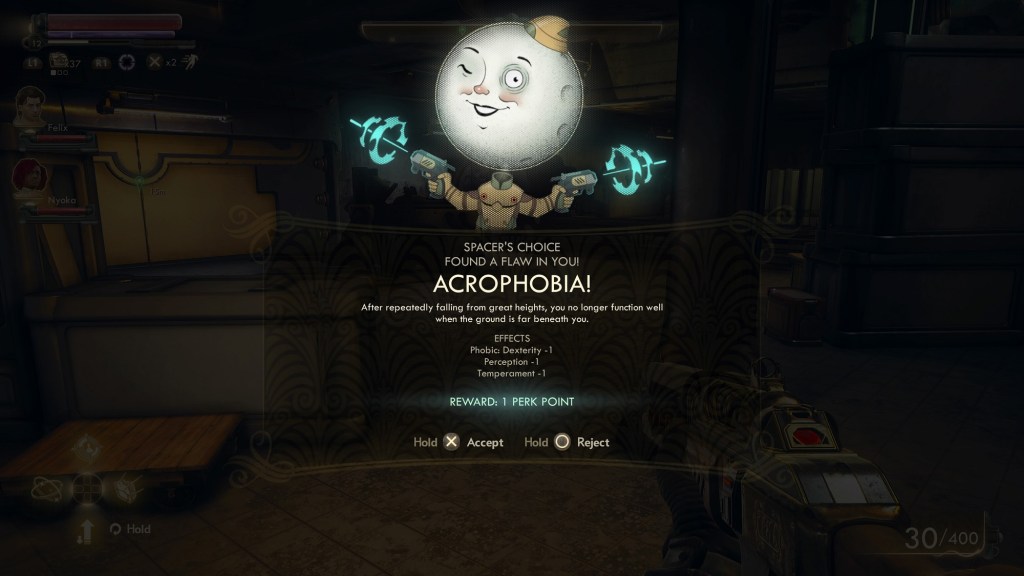 Above: All I had to do to earn this was fall a lot.

My favorite part of the skill system is Flaws. You get these for, well, failing. You take a few dings on stats in exchange for a new Perk. I’ve long loved RPG design in which you take on disadvantages for a boost (I first encountered these in Advanced Dungeons & Dragons‘ 2nd Edition Player’s Option line). I got my first Flaw from falling from hills too often (something I could see happening in real life). My second came from taking too much damage against robots.

Couple all this with the difficulty settings, and you get a great deal of freedom in how you build your character. Play on the easiest modes, and you don’t need to worry too much about dumping points into combat stats.

Whenever The Outer Worlds loads in a new area, it puts up a piece of gorgeous art. It comes from the concepts developed by the art team. These designs, which evoke a style from the 1940s-1950s, look great and add character to the world. Some of these are ad pitches for the companies The Outer Worlds spoofs. Others are dissections of creatures you find.

They also reflect your decisions. Events you bring about appear in these loading screens. It’s a neat feature. 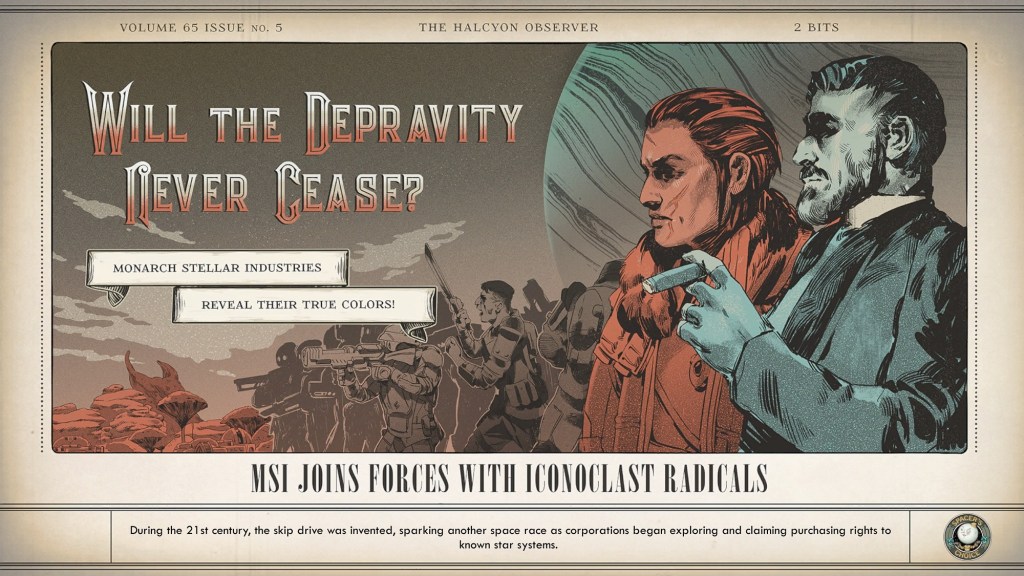 Above: This image is the result of your decisions. You may not get it on your playthrough.

Early on, you learn the choices you make, the alliances you foster, have ramifications. Every planet you visit, every station you stop at, the decisions you make have the chance to influence, even change the lives of, everyone there. In a story like The Outer Worlds, people should be left dealing with your wake, either for good or ill. It makes you more conscious of your decisions as well.

After my actions helped people in one settlement to the detriment of those in a much larger town, I decided to to be a mite more careful. On the next planet, I brought together arguing factions and helped them hammer out a compromise in which they could both live with … and, I hope, prosper together.

Fighting feels like it’s in the way of you exploring and interacting with the people of Halcyon. It’s first-person, like Fallout 4 or The Elder Scrolls V: Skyrim, but it doesn’t have the draw of those games. Part of it comes from the hordes of marauders you fight on some planets. They feel the same, regardless which world you’re on, and it leads to a number of rote encounters.

I do enjoy slowing down time. The “tactical time dilation” feels like the V.A.T.S. system from Fallout (no surprise, since Fallout folk count among Outer Worlds’ designers). It’s helpful for when you want to snipe targets or plan out assaults. I used it sometimes, and I didn’t use it with other encounters, and I didn’t miss it when I skipped it.

You can mod weapons, but I keep feeling like the combat designers were pushing me to use machine guns and other weapons with bullets. Most of them just do more damage than energy weapons. I’m in space! Give me cool lasers, blasters, and other sci-fi weapons. If I wanted to fire machine guns, I could play Call of Duty this fall.

Picking up lots of loot is a pain 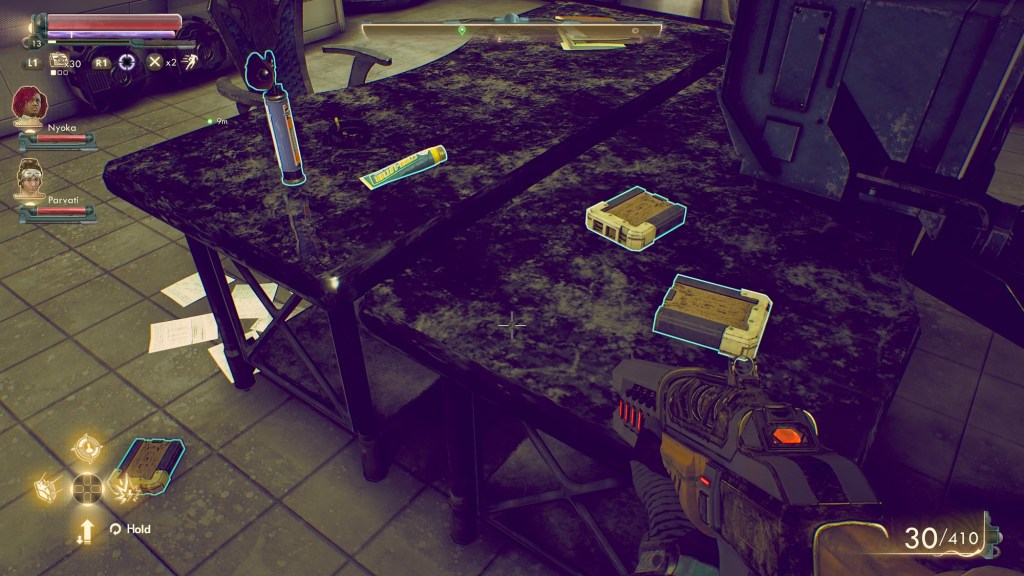 Above: Just let me pick it all up at once.

When you go into houses, research facilities, and other locations, you’ll often find a lot of items sitting on counters, the floor, and tabletops. Shelves will hold things you can eat and drink.

And you have to highlight each, picking them up one by one. It’s tedious. It’s annoying. And it’s archaic. We should be able to press one button to pick up all the stuff scattered around.

The Outer Worlds is funny and an effective critique of corporate culture … and the power conglomerates we have in our society. Each world and way station has plenty of quests for you, and most of them have a good little story to accompany them. The characters can be intriguing, subtle, or over-the-top. But you remember them, and that’s saying much more than I can about other RPGs I’ve played this year.

My complaints with The Outer Worlds are small, more quality of life things than anything else. Combat will drag, as it does in many RPGs (and yes, I know Obsidian’s isometric combat in Pillars of Eternity can get repetitive as well). Yet the humor, the world-building, and the decisions you face outpace any of my concerns about combat or loot. And it’s an excellent followup to Private Division’s first published game, Kerbal Space Program.

The Outer Worlds is Obsidian’s final game as an independent company (it’s now part of Xbox Game Studios), and it’s one helluva swansong.

The Outer Worlds comes out October 25 for PC, PlayStation 4, and Xbox One. The publisher gave GamesBeat a digital PlayStation 4 copy for the purposes of this review.