Branding is a powerful thing. Back in 1976, Sega’s The Fonz arcade game was the first-ever licensed game. And ever since, games based on licenses have been some of the biggest hits — and also some of the biggest flops. For every GoldenEye, there’s also an E.T.

When it comes to mobile games, third-party brands and IPs have a solid and sizable presence in the top-grossing charts. In the US, 30% of the top 100 grossing games on the App Store are currently based on some kind of third party IP, from Star Wars to Ellen according to our analysis at GameRefinery. Cast the net a bit wider to the top 200, the figure only drops slightly to 25%.

So we can see that despite the huge global success of original IP in mobile games, licensing the right brand and IP is a viable route to building a successful game. Despite the often high upfront cost, licensed games offer instant recognition and appeal, and in some ways can be easier to build a game around than having to come up with something completely original.

The challenge is matching the IP to three crucial factors: game genre, feature set, and demographics. In a way, this is very similar to designing games through a “marketing-first perspective” as recently outlined by Sami Khan of Cerberus Interactive. As we’ll see, getting all three right is the key to success — but the history of the games industry is littered with examples when these factors have been misaligned.

Not all game types are created equal when it comes to “IP synergies.” In other words, the additional value of licensing IP for a game is greatly dependent on the game’s genre. We’ve all seen games where a well-known brand or individual is simply “skinned” on top of an existing game — the early days of mobile and Facebook advertorial games were particularly bad for this. Conversely, successful use of IP comes when there is an obvious synergy between the IP and the style of game. 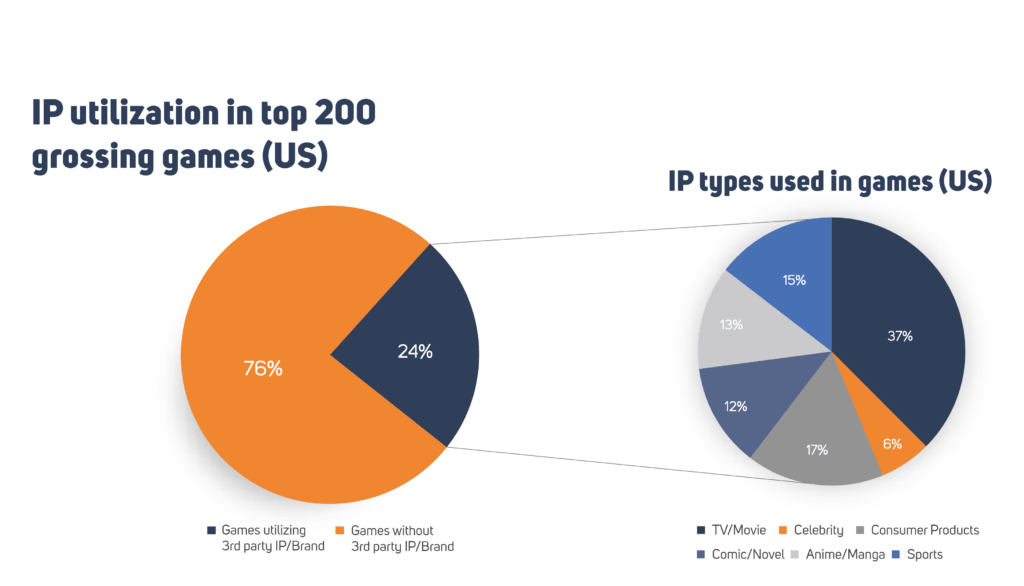 Above: Data from GameRefinery showing the use of third party IP in games ranked amongst the top 200 grossing games in the US Apple and Google app stores

For example, there have been (and are) numerous casual match-3 games based on well-known IPs of animated movies and pop icons. However, even if the IP has matched the game’s target demographic audience perfectly, none of them has hit it big as those games based on original IP, with Candy Crush the most obvious example. With this kind of game genre, the addition of the license rarely has any impact on the core game mechanic, but in such a competitive genre, the IP may simply be there as a way to boost user acquisition and marketing.

The puzzle game Dice with Ellen from Scopely is a good example of this kind of licensed IP application. Based on the original IP game Dice with Buddies, the newer game retains the same core gameplay but has an updated look and feel featuring lots of images and audio from U.S. talk show host Ellen DeGeneres. GameRefinery’s own analysis of both games suggests that Ellen with Dice has greater appeal to gamers over 40 compared to the non-branded version. Above: Dice with Ellen vs Dice with Buddies, both published by Scopely. Both games have the same core gameplay and features, with Ellen’s name and image used primarily as a marketing tool.

If we look at another popular genre, there are plenty of midcore RPG games based on third party IPs that are raking in tons of money. And more importantly, the ratio of successful RPGs using licensed IPs to those without is much higher than in other genres.

This makes sense because relevant IP usually comes with strong characters, stories, and/or lore elements that RPGs are naturally able to integrate as part of the gaming experience. Endless grinding becomes more rewarding when you’re beefing up Luke Skywalker or sending your favorite Marvel character into battle.

Above: Star Wars: Galaxy of Heroes and Marvel Strike Force are good examples of games where a third party IP adds real value when paired with a popular game genre.

Pokémon Go is another great example of an IP that has been fused seamlessly with a game’s core mechanics. The whole concept of collecting as many Pokémon as possible is perfect for a game built around location and AR. In fact, all of the four location-based games currently in the top 300 grossing rankings are based on very well known TV or movie IP — Pokémon, Jurassic Park, Harry Potter, and The Walking Dead.

We’ve looked at how some game genres are more suited for third party IP than others. But even with these “IP synergistic” genres, the fit isn’t always guaranteed. So the next question you need to ask yourself is how well the IP you’re licensing supports your game’s feature-set.

For example, RPGs with a heavy focus on character collection and development features are much better off with an IP that comes with a wide range of distinguishable heroes and villains. Even better if they’re tied together by rich background lore. This way, your meta and core layer features are aligned with and supported tremendously by the IP.

If you do decide to go with an IP that lacks the things mentioned above, it won’t reinforce your game’s feature-set in a meaningful way. Take the example of Blade Runner Nexus, an RPG based on the Blade Runner universe. The game soft-launched in January of this year, so a considerable amount of time after the theater release Blade Runner 2049.

Although the Blade Runner IP is pretty strong, the game doesn’t include any of the actual actors from the films. Maybe not everyone wants to pretend to be Ryan Gosling — but as an IP the movie – and therefore the game —  doesn’t boast dozens of memorable characters aside from the leads. This means that the game faces a challenge in building up a diverse enough character roster in comparison to the typical RPG. 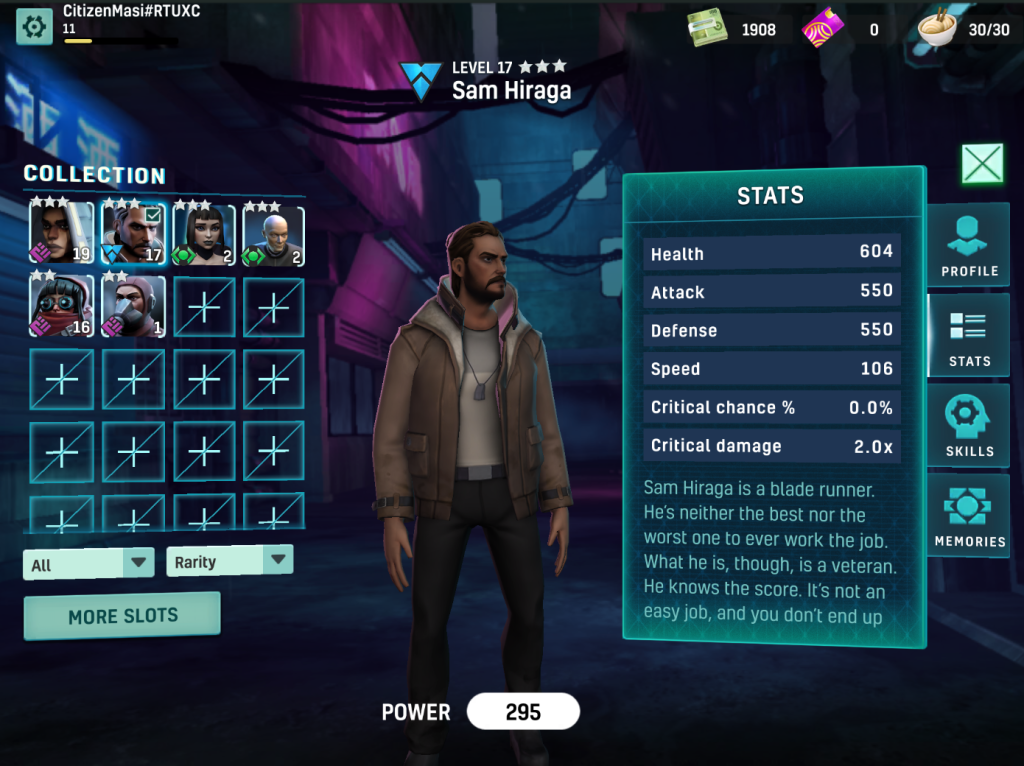 Above: Blade Runner Nexus is an RPG loosely based on the Blade Runner 2049 movie. RPGs typically have a large roster of memorable characters — whereas the two Blade Runner movies had very few

My third point touches probably the most obvious effect of brands and IPs in games. When you decide to go down the path of licensing, you’re pretty much locking down a lot of major design aspects, particularly the characters, storyline and art style. These are really important factors in defining a games’ demographic appeal, which in turn is something to keep in mind when designing your feature-set.

If the IP you are sticking with doesn’t fit the natural demographic appeal of your game mechanics and genre, the outcome probably won’t shoot through the charts. In other words, even if you choose an “IP synergistic” genre like RPG or strategy, if the IP doesn’t appeal to a typical RPG gamer they unlikely to try it — even if the IP supports your feature-set with, for example, lots of characters backed by rich lore and story elements.

A great example of a game that found the right fit of demographics, game features and genre is Kim Kardashian: Hollywood from Glu. At the time it was launched it seemed like quite a gamble by the company, but the game quickly became a huge hit and remains a top-200 grossing title after almost five years. Conversely, Glu attempted to replicate its success with a second Kardashian-themed game Kendall & Kylie, as well as licensing singer Katy Perry for Katy Perry Pop and Nicki Minaj for Nicki Minaj: The Empire — but none had anything like the same impact or longevity. In hindsight, attaching a game to the personal brand of Kim Kardashian was the perfect license at the perfect time — the other celebs simply didn’t reach the same level of hype or demographic fit.

Above: After the huge success of Kim Kardashian: Hollywood Glu tried to repeat the formula but without quite the same level of success

This IP versus game mechanic mismatch is especially dangerous if the IP clearly appeals to casual audience but the game design for mid-core gamers, with heavy metagame elements and complex UI/UX. This leads to a situation where your casual player base has a hard time getting its head around the actual game while the mid-core audience gets turned off by the IP, which can cause some serious pain.

One example of this challenging mix is Disney Sorcerer’s Arena, which combines Disney characters likely to appeal to more casual gamers with midcore gameplay and meta elements. The problem is that even though the game has a huge roster of well-known characters to collect/play with, the tactical battler audiences are not likely to find Mickey Mouse or Ariel as appealing as Iron Man or Black Widow. In other words, for these people, the IP is likely to act as a deterrent — not a retention driver. On the other hand, the people who’d love to collect Disney characters would probably engage more with simpler gameplay mechanics.

Above: The character rosters of Disney Sorcerer’s Arena and Marvel Contest of Champions appeal to quite different demographic groups

How to make the most of third party IP

Licensing is a huge business, and the pressure on games publishers to achieve financial success is relentless. Therefore, it’s no surprise that many companies see third party IP as the best way to achieve this. So it’s more important than ever to know how to use them effectively for optimal results.

In summary, our analysis of hundreds of games shows there are three key aspects to consider when using a third party IP to boost your game’s performance:

These three aspects are fundamentally connected, so keeping an eye on the whole mix is crucial. Only when all the pieces of this puzzle are matched and support one another can you expect good results. If, on the other hand, the IP vs. product integration is not thoroughly thought out and well-executed, then even the most valuable IP won’t save a bad game. Just ask the team behind E.T.

Joel Julkunen is Head of Game Analysis at GameRefinery and has a major role in developing the algorithms and statistical models used in the company.