Billions of devices are expected to be connected to the internet by 2030, according to Cisco, a chunk of which will be highly vulnerable to intrusion and data breach. Hewlett-Packard Enterprise reported in a recent study that as many as 70% of internet of things (IoT) devices contain well-known exploits. And from 2016 to 2017, Symantec traced a 600% increase in targeted attacks against IoT products.

The voracious appetite for cybersecurity solutions led Firedome, a Tel Aviv- and New York-based startup that initially focused on securing smart home devices, to expand into enterprise and industrial verticals and pursue strategic partnerships with “major” manufacturers. That in turn beguiled investors like Two Sigma Ventures, which recently led a $10 million series A funding round in Firedome with participation from World Trade Ventures and Silvertech Ventures.

It brings the company’s total raised to $14.5 million.

“We were pleased to find out that IoT device companies, across industries, are not willing to compromise the security of their products and are aware of the vulnerabilities that cannot be fully eliminated by static security by design processes,” said CEO Moti Shkolnik, the former head of the Israeli Prime Minister’s Office cyber business unit who cofounded Firedome in 2018. “We were happy to witness the rapid progress of closing partnerships with tier 1 companies, about which we will be able to divulge soon. We strongly believe that real-time endpoint cybersecurity is the inevitable future of the IoT security landscape.” 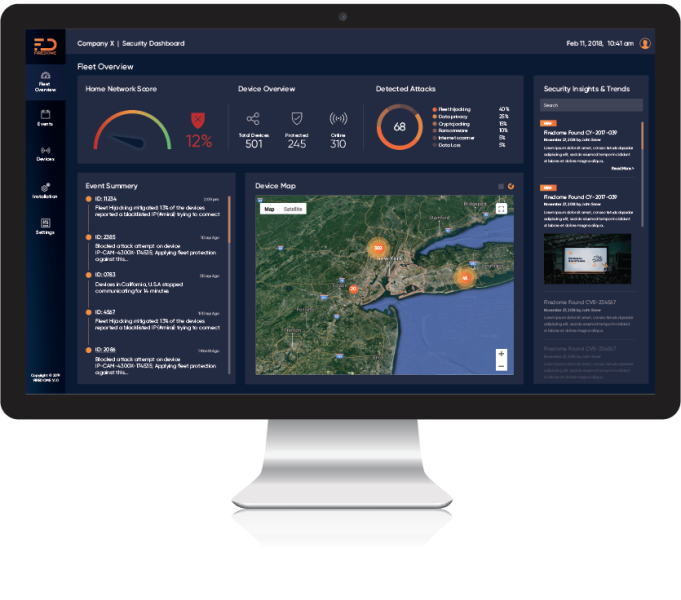 Firedome’s Endpoint Protection suite addresses a range of different cyberattacks, from ransomware, malware, denial of service, and fleet hijacking to remote access and cryptojacking. Within a dashboard, response teams can see collated analytics and real-time insights, as well as unfolding zero day attacks. They’re also able to aggregate threats and kick off remediation efforts as needed, and to surface tidbits like security alerts, devices’ process and locations, and update statuses.

A software-only, lightweight agent installed on each IoT device is designed to constantly monitor activity and spot anomalies. Using heuristic, reputation, and signature-based scanning as well as network traffic inspection directed by a cloud-based AI agent, it’s able to respond quickly to detected attacks and remediate at least a portion of them.

“With IoT devices proliferating rapidly, I believe there is now more than ever a need for robust endpoint device protection,” said Two Sigma Ventures partner Matt Jacobus. “There are 8 billion connected devices that exist today, ranging from complex machines with sophisticated architectures to tiny devices with limited resources, that could benefit from the proactive protection of Firedome’s lightweight agent coupled with their backend machine learning platform and security operations center. If you’re a device manufacturer and you’re not actively monitoring what’s happening inside your device, you may soon be facing serious reputational and financial risk.”

It’s worth noting that Firedome isn’t the only startup developing a robust security solution for IoT devices. Another is Armis Security, which raised $65 million earlier this month for its agentless software-as-a-service solution. Mocana recently nabbed $15 million in funding to develop its end-to-end on-device cybersecurity toolset further. Axonius, which develops software that helps businesses track and secure their connected devices, closed a $13 million round earlier this year. And IoT cybersecurity startup Vdoo raised $32 million in April.

Perhaps it’s no wonder that the IoT security segment is projected to be worth $35.2 billion by 2023, according to Markets and Markets.