When combined with Micron‘s memory chips, Fwdnxt (pronounced “forward next”) will enable Micron to explore deep learning solutions required for data analytics, particularly with internet of things and edge computing.

Micron also announced a series of flash-based solid-state drives for consumers and enterprises, as well as new security products. The Boise-based company unveiled them at its Micron Insight event in San Francisco.

Sanjay Mehrota, CEO of Micron, said at the event that such solutions are unlocking data insights, with memory and AI at the heart of it.

“Our vision is transforming the way the world uses information to change life,” Mehrota said. “The compute architectures of yesterday are not suitable for tomorrow.”

With the acquisition, Micron is integrating compute, memory, tools and software into an AI development platform. This platform, in turn, provides the building blocks required to explore innovative memory optimized for AI workloads. 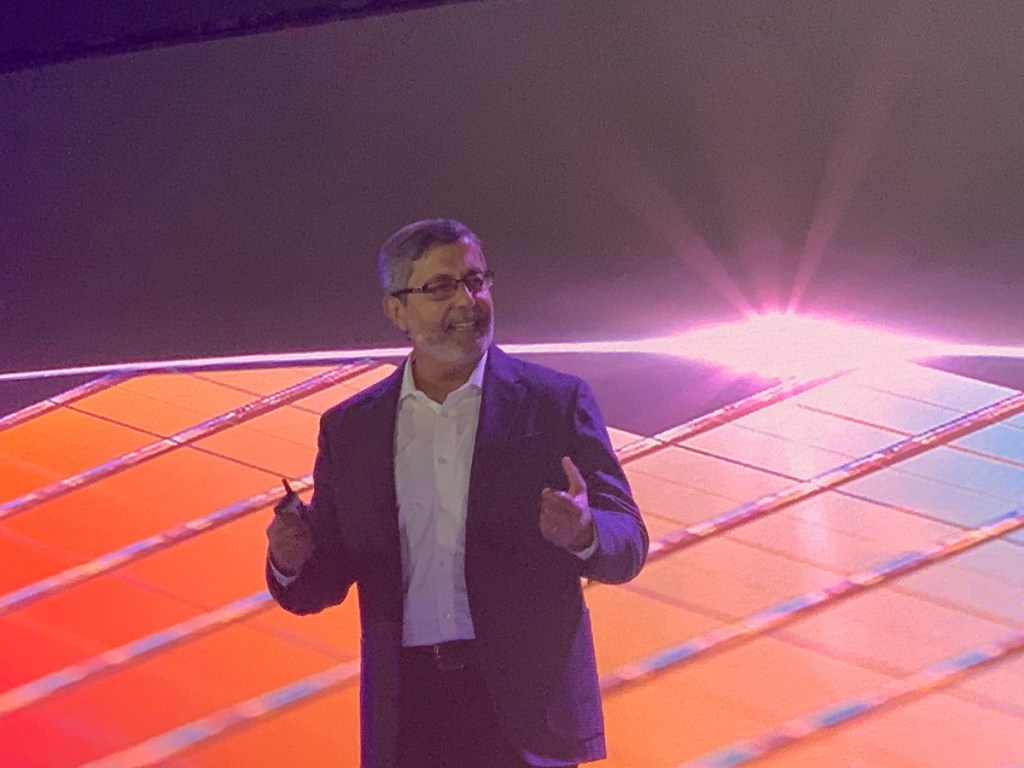 Above: Sanjay Mehrota, CEO of Micron, at Micron Insights.

Micron’s DLA technology provides a software-programmable platform that supports a broad range of machine learning frameworks and neural networks and allows for processing vast amounts of data quickly in an easy-to-use interface.

This feels like Micron will be competing with Intel and Nvidia. That may be true, but it will also likely continue to partner with them. Still, Micron is moving deeper into the ecosystem to solve problems for its customers.

“In the long run, we think compute is best done in memory,” Mehrota said.

Jon Peddie, analyst at Jon Peddie Research, said in an email, “Micron with its acquisition of Fwdnxt extends its platform stack into apps, software development kits, and software tools as other semi companies like Xilinx, Qualcomm, Texas Instruments, and others. That raises the value add and increases margins as they get closer to the end customer.”

Micron said its DLA can consume massive amounts of data and then return insights that launch discoveries. For example, Micron is collaborating with doctors and researchers at Oregon Health & Science University to use convolutional neural networks (CNNs) running on DLA to process and analyze 3D electron microscopy images. The goal of this collaboration is to discover new insights for treating cancer. Micron is also partnering with physicists at leading nuclear research organizations who are experimenting with DLA-based CNNs to classify the results of high energy-particle collisions in near real time and detect rare particle interactions that are believed to occur in nature.

Micron also introduced its solid-state drives, including the Micron 5300, which uses cost-effective 96-layer 3D TLC NAND flash memory chips. The 5300 series enables strong performance for read-intensive and mixed-use segments, including media streaming, BI/DSS, OLTP, and block and object storage. It has 50% higher reliability than the past. 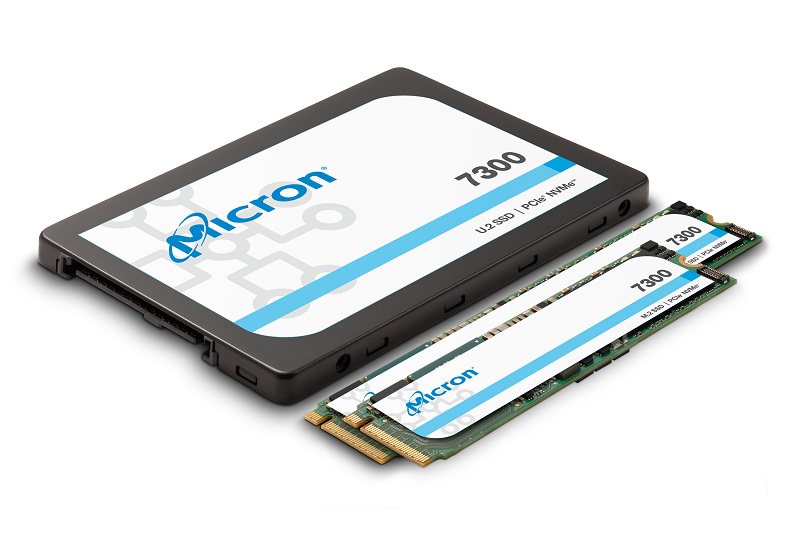 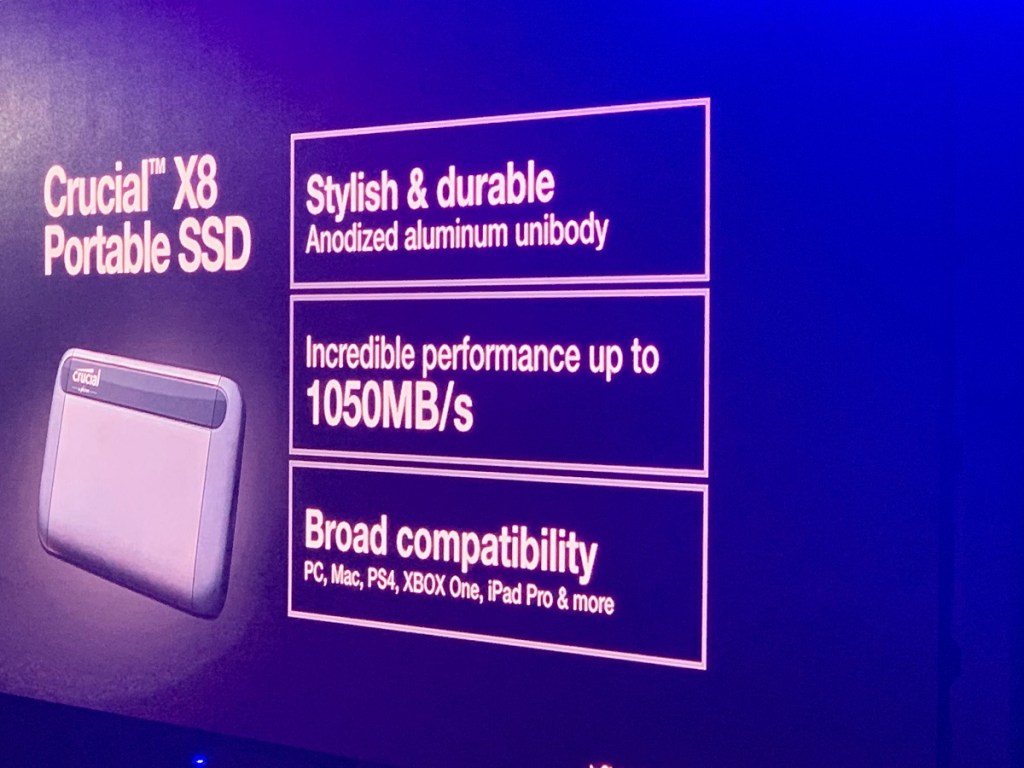 With the launch of Crucial X8, Micron is moving into consumer portable SSDs. The product focuses on fast transfer times and high capacity for consumers storing photos, videos, and documents, as well as curating music, game libraries, and video collections.

Mehrota said that half of gamers use a terabyte of storage on their devices. Crucial X8 is immediately available for ordering in capacities up to 1TB.

With read speeds up to 1,050MB/s, the drive performs 1.8 times faster than similar portable SSDs within the same price category and up to 7.5 times faster than portable hard drives. The Crucial X8 is compatible with a variety of devices, including PCs, Macs, PS4s, XBOX Ones, iPad Pros, Chromebooks and select Android devices.

By integrating this product through flash, it can be utilized for hardware-based system protection and to establish strong device identities for internet of things devices, creating instant access to security-as-a-service capabilities. The Authenta Key Management Service is backed by trusted silicon credentials, without having to leverage hardware/SoC changes. Sadana said that Micron can embed the security in the chip while it is still inside the chip factory.

Mehrota said that the company has instrumented its factories with sensors for smart manufacturing, with tens of millions of measurement points. The efficiencies from that have improved output by 10% and time to yield by 25%, he said.

Micron also announced the world’s fastst SSD, using 3D XPoint technology. The Micron X100 SSD is the first solution in a family of products from Micron targeting storage- and memory-intensive applications for the data center.

These solutions will leverage the strengths of 3D XPoint technology and usher in a new tier in the memory-to-storage hierarchy with higher capacity and persistence than DRAM, along with higher endurance and performance than NAND flash memory.

The SSD offers up to 2.5 million input/output operations per second (IOPs), more than three times faster than today’s competitive SSD offerings. It also has more than 9GB/s bandwidth in read, write and mixed modes and is up to three times faster than today’s competitive NAND offerings. And it provides consistent read-write latency that is 11 times better than NAND SSDs.