Nvidia unveiled its new generation of Shield TV set-top boxes that stream media and enable cloud-based gaming. The new boxes, which retailers inadvertently leaked in recent weeks, will debut for $150 and $200.

One of the devices looks like a plastic tube. Nvidia can pack a lot of technology into that little space. And it enables easy integration with 21 different over-the-air media services as well as voice integration with Google Assistant.

The new Shield family comes with a Tegra X1+ processor that offers up to 25% more performance than its predecessor. Both models bring to life Dolby Vision for more vivid video imagery and Dolby Atmos for surround-sound audio. And the new chip harnesses more horsepower to power an HD-to-4K AI upscaler, which improves the quality of the picture when watching HD streams on a 4K screen.

The new Shield TV is targeted at casual streamers, media enthusiasts, and gamers. Nvidia has never talked about how many Shield set-top boxes it has sold since 2015, but it continues to make improvements in order to highlight the technology that it can bring to bear in developing advanced streaming boxes.

“We’re not looking to be another stream low-end device,” said Chris Daniel, director of Shield product management, in an interview with GamesBeat. “We’re looking to be the most advanced. We want to be best in class in this market.”

Turning on the new Shield 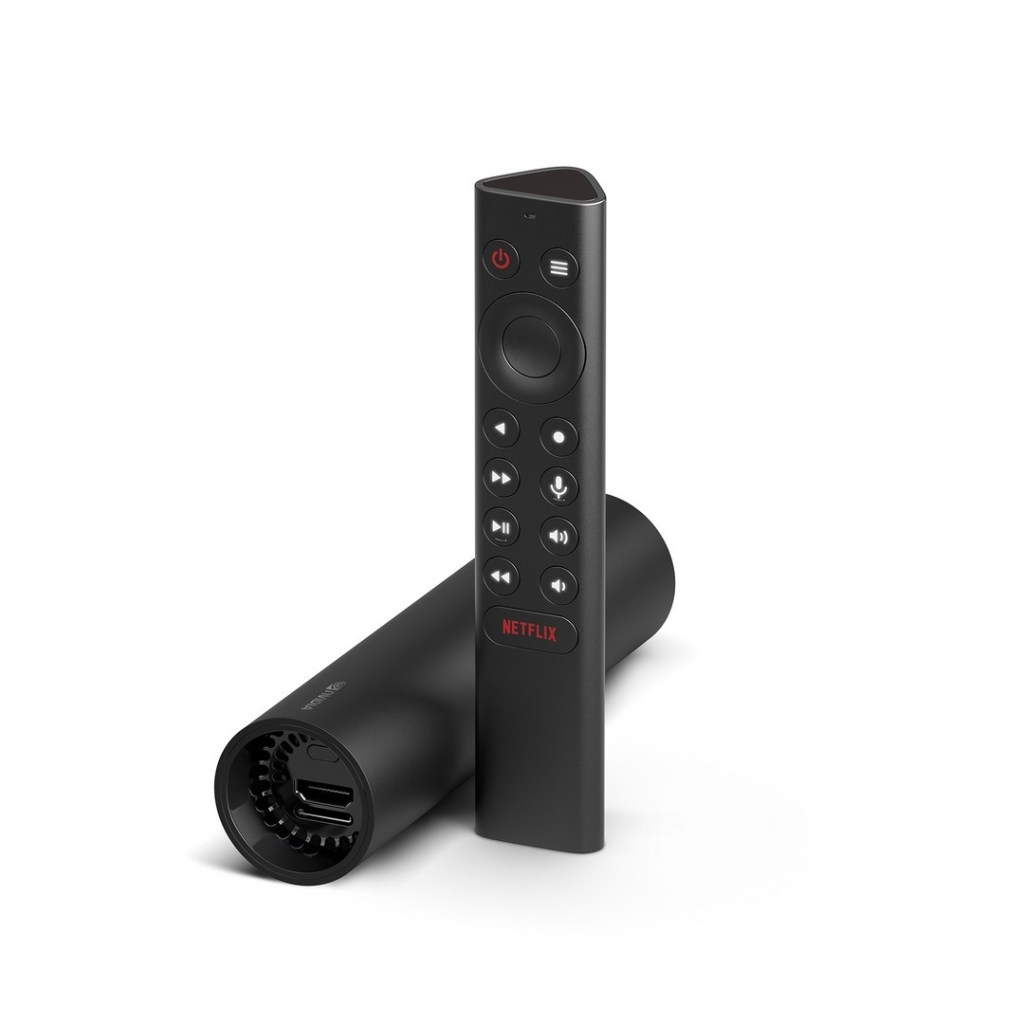 Daniel gave me a demo at Nvidia’s headquarters in Santa Clara, California, and I also got a close look at the new $150 Shield TV and went through the installation process. It was a breeze.

The device came in a tiny box, and it sports 8GB of memory. The Shield TV fits inside a tube that is 1.5-inches in diameter and just 6.5 inches long. Its design is meant to not take up any space on an entertainment center. Rather, it sits behind an entertainment center and looks more like it is just part of the cabling. You attach an HDMI cable on one end and the power cable on the other. It also has slots for a Gigabit Ethernet connector and a microSD card.

Besides using a wired Gigabit Ethernet connection, you can also connect via dual-band Wi-Fi. The home screen is customizable so it shows the apps that you use the most.

The remote control has a triangular look. It can rest on its side and you can see all the buttons at glance without holding the remote. You can find the remote using a Shield app on your smartphone. And when you pick up the remote, the motion sensor detects the change and activates the backlit buttons. This adds convenience, and it saves power too.

The remote has fast-forward and rewind buttons. In the past, you had to hit three buttons to fast forward. Now you only need to hit one button. It also has a dedicated power button that can turn off both the Shield and your TV. If you hold down the microphone button, you can issue audio commands to the Shield or the Google Assistant.

The remote also has infrared built into it. With the voice control, you can customize voice commands. Daniel said “show time,” and it dimmed the lights via Google Assistant, set the Google Nest thermostat to 72 degrees, and then opened the Netflix app. 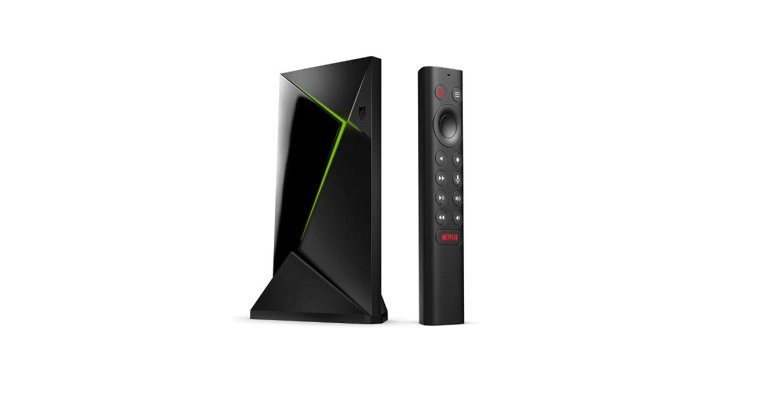 Above: Shield TV Pro has more memory and USB connectors.

The larger Shield TV Pro looks like the older design, or more like a normal set-top box. It comes with additional memory and storage, plus two USB ports for running a Plex Media Server and connecting high-capacity hard drives or other USB devices.

Both Shield devices come bundled with an all-new remote control that features motion-activated backlit buttons, a built-in lost remote locator, a mic for voice search, and space for two AAA batteries. It still runs on Google’s Android TV, and it has access to more than 5,000 apps and over 500,000 TV shows and movies.

The new Shield family also comes with both Dolby Vision and Dolby Atmos decode support. Dolby Vision enables better brightness, contrast, color, and detail. When compared to a standard picture, Dolby Vision can deliver colors never seen before on a screen, with dramatic contrast, highlights that are up to 40 times brighter, and blacks that are 10 times darker.

And the support for Dolby Atmos means listeners can get surround sound audio that feels like it is all around you in a home theater.

AI in the home

“Before, we didn’t take advantage of the AI, but now we do with AI upscaling. We had this very capable, powerful processor in the Shield, which today makes it render scenes nicely and lets you play great games,” Daniel said. “But we didn’t use it a lot when you’re streaming Netflix, for example. And so partnered with our AI teams to develop a new innovative technology first for streaming media players, which takes advantage of artificial intelligence to upscale HD content from today’s popular apps to near 4k quality.”

Shield also boasts a wide range of gaming content on a streaming media device with support for cloud gaming, local streaming, and advanced native games. Gamers can enjoy hundreds of supported games in the GeForce Now beta, including many recent releases and top free-to-play games like Fortnite.

You can buy a separate Shield game controller for $60. But the device will also work with PlayStation 4, Xbox One, and Android game controllers. I played a couple of rounds of Fortnite on the Shield TV, and I got eliminated quickly in the battle royale game. In other words, it worked fine.

Nvidia has used Shield over the years to introduce new technology. It brought 4K Netflix to streaming boxes, and also introduced 4K HDR Netflix. It is a relatively ad-free experience, and it also works with Amazon Alexa.

“Because Shield is built on the open Android TV platform, we can jump onto the newest available features,” Daniel said.

With Android TV, you can easily use apps such as Google Photos, Google Calendar, Google Play apps, and other Google apps. The Google Play app has a better look. As for Stadia, Danield said the company isn’t saying if it will support the service, but he noted that GeForce Now is already working on the box, and that the Shield TV is an open platform. For Stadia to work on Shield TV, Google would have to make sure that Stadia runs on top of Android TV.