As audiences have embraced on-demand video services, algorithmic feeds, and an ever-growing number of digital “things to do,” our collective attentions have become hyper-fragmented. Yet we know that audiences actually love shared live experiences. Jeopardy is more fun watched with others. Movies are funnier in a packed theater. It’s hard to enjoy sporting events that happened hours earlier

The durability of this appeal spans generations: Boomers watched the moon landing together, Generation X witnessed the end of M*A*S*H, and millennials recently collectively viewed (and complained about) the ending to Game of Thrones. Each generation might prefer different content, but we all love to watch it together and live. There’s no better proof of these two points than the recent #FortniteBlackout.

The collapse of Fortnite into a black hole represented the natural evolution of video gaming into a more viewer-driven medium. This event, which served as a sort of TV finale, was witnessed with surprise by tens of millions of the world’s youth around the world simultaneously. Esports personality and consultant Rod “Slasher” Breslau noted 4.5 million viewers on YouTube and 1.5m viewers on Twitch, and there are perhaps millions or more who watched in-engine.

While Fortnite’s spacebound-event was, obviously, less culturally important than the moon landing, it was arguably more technically sophisticated. It was executed flawlessly across myriad devices, such as hardlined PlayStations, Wi-Fi tablets, and mobile phones, and access models, such as the in-game engine, Twitter videos, and Twitch broadcasts. 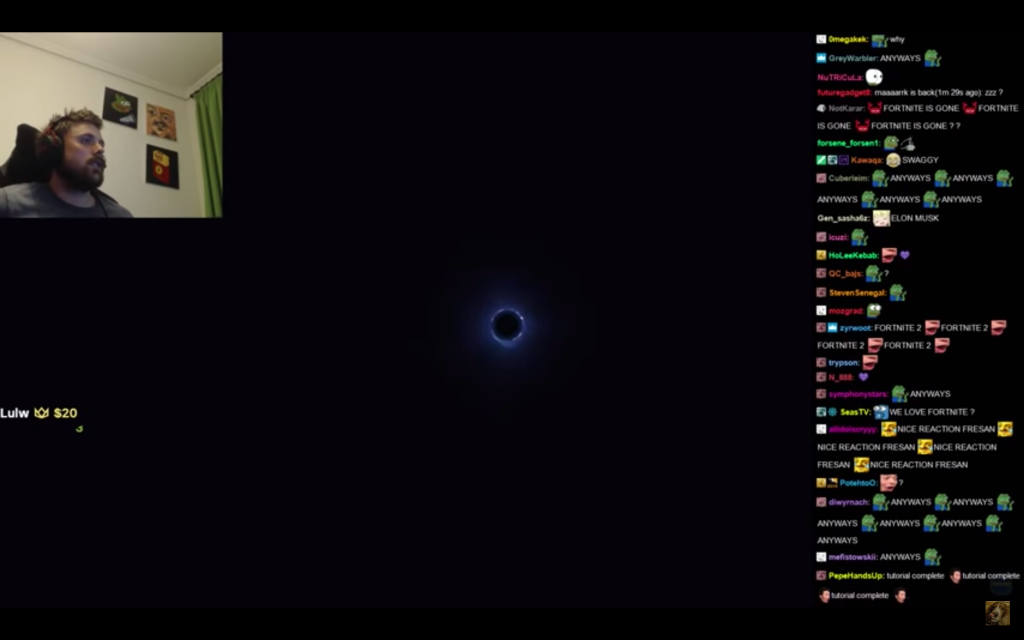 This achievement meant that while millions of people could participate in the Fortnite Season X Finale, they could also do so in millions of different ways. You watched it with your character, or alongside your favorite streamer, in your home or on the go, in the background, or as the center of attention.

This is distinct from the shared experiences of decades past. And it continues to grow as new experiences are tested and improved all the time. For example:

There is a future format of entertainment coming, centered around massive, interactive, live events (MILEs). It has become possible thanks to the combination of game engine technology, video streaming and the web’s ubiquity, and reflects the merger of video gaming with media.

And crucially, these sorts of interactive experiences are distinct from Choose Your Own Adventure-style interactive TV series such as Netflix’s Bandersnatch or You vs. Wild. In these shows, the story is predetermined, on-demand, and yours alone – nothing you do has consequences to anyone but you. Conversely, MILEs are communal, experienced concurrently, nonlinear, and where every input has potential lasting significance.

As the MILE category evolves, game companies will begin to see the viewer not as a potential player of their game, but as its own audience, capable of driving new monetization. Meanwhile, media companies will wake up to the fact that the coming generation expects interactivity by default.

For example, I have a 2 year old who gets upset when he tries to tap on the television and it does not respond the same way his phone does. By the time, he’s 12, he’ll expect to be able to affect contestants in American Ninja Warrior live, or know that should a long-rumored Lost-remake happen, he should be able to influence what happens.

The future of the form

We don’t know exactly what these experiences will look like. As with all entertainment, formats emerge over time as they’re tested, tweaked, and evolved. The rise (and fall) of HQ Trivia is instructive here. Ultimately, it failed because it could not figure out the optimal format to keep users engaged long-term. If Fortnite: Chapter 2 felt like Fortnite: Chapter 1, we would likely see decline.

There are already a variety of phenomenon exploring this space. In Japan, VTubers, or Virtual YouTubers- anime characters who interact with their audience — have exploded over the last two years. They’re already hosting concerts and TV shows, soon we’re going to see them hosting game shows or emceeing events. And in a few years, the concept will expand from anime to other styles, including realistically rendered humans.

We are still in the early days. And so what is important is for creators — from game developers to media companies — to experiment and collect interactive data. Prototype, release, iterate. Fortnite itself started as something completely different and struck lightning in a bottle when it switched to the battle royale format after years in development as another genre. In five years, it might be something entirely different again.

The winners of the future of entertainment will be those who understand the best habits for creating live interactive content first, and design around the competitive advantage that this early data brings them. Simple to use SDKs like ours at Genvid will enable you to get there faster, and there are smart people in the space, like Makers Fund, who are looking to invest in creators and companies wanting to pioneer this new frontier.

Jacob Navok is CEO at Genvid Technologies, which makes an SDK for game developers, media companies and broadcasters to create new formats of interactive content over livestreams.