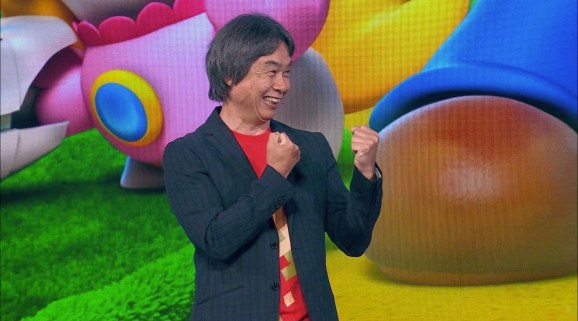 The government of Japan is selecting famed Mario creator Shigeru Miyamoto as the country’s latest Person of Cultural Merit. This is an award Japan has handed out since 1999 to bring attention to standout professionals in fields like art, science, sports, and academics. Now, the country is pointing that spotlight at one of the most accomplished game designers ever.

“I’m thankful that light is being shined upon the medium of games.,” Miyamoto said in an interview with Japanese news site Sankei (thanks to Cheesemeister3K on Twitter for the translation).

Miyamoto went on to thank his colleagues.

“This is a job where you cannot do anything by yourself,” he said.

But the Mario and Zelda creator also gave credit to Nintendo’s hometown of Kyoto. He told Sankei that the city’s history and culture gives the company confidence. Instead of just making something momentarily fashionable, Nintendo can instead make something that it finds interesting.

At 66, Miyamoto is now in retirement age. But he insists he’s not calling it quits yet. He even wants to remain so busy that no one even asks him the question anymore.

“I’m going to do my best to keep doing new things so I don’t get asked if I’m about to retire,” Miyamoto said. “I want people all over the world to smile.”

One person he is making smile is Yuji Naka, who was the director of the Sonic the Hedgehog games on the competing Sega Genesis.

Miyamoto defined the culture of games for a generation

Miyamoto joined Nintendo in 1977 as an artist. When the company needed a new game to replace unsold arcade cabinets in 1980, Nintendo president Hiroshi Yamauchi put Miyamoto in charge of the job. That led Miyamoto to design Donkey Kong, which was unlike the popular shooter games of the time. But Donkey Kong turned into a massive worldwide hit.

When it came time to produce games for the Nintendo Entertainment System in the late 1980s, Miyamoto designed Super Mario Bros. and The Legend of Zelda. Both were revolutionary and are still beloved classics. Super Mario Bros. introduced smooth, side-scrolling stages and a focus on level progression. Zelda, meanwhile, was a nonlinear open world where players advanced through exploration and experimentation.

Today, Miyamoto oversees all of Nintendo’s game development as its representative director and creative fellow.