In August, we reviewed the LG Dual Screen, a clamshell case for the LG V50 ThinQ with a built-in screen that doubles as a miniature monitor. Months later, at IFA 2019 in Berlin, LG announced a revamped Dual Screen with a few nips and tucks, chief among them higher-quality materials and compatibility with the LG G8X ThinQ.

We weren’t overly impressed with the Dual Screen, which lacks an external display and a high-bandwidth connection. But the new Dual Screen lured us with the promise of much-needed refinements. Here’s our quick review.

The Dual Screen’s design hasn’t evolved much from the first generation, with three exceptions we’ll address in a moment. It retains the original’s piano-black finish (save a rear textured pattern) and two-hinge design, which roughly doubles the weight and thickness of the G8X. And it has a small (2.1-inch) outward-facing display — the Cover Display — that populates with alerts, the time and date, battery status, and more.

The Cover Display fixes a critical flaw of the original Dual Screen that required fumbling with the hinge whenever calls and texts came in. Two other pain points are addressed with the Dual Screen’s 360-degree hinge and a USB-C connector that plugs into the bottom portion. The original Dual Screen couldn’t tilt beyond 180 degrees, and it relied on a flaky combination of POGO pins and wireless for data transfer. 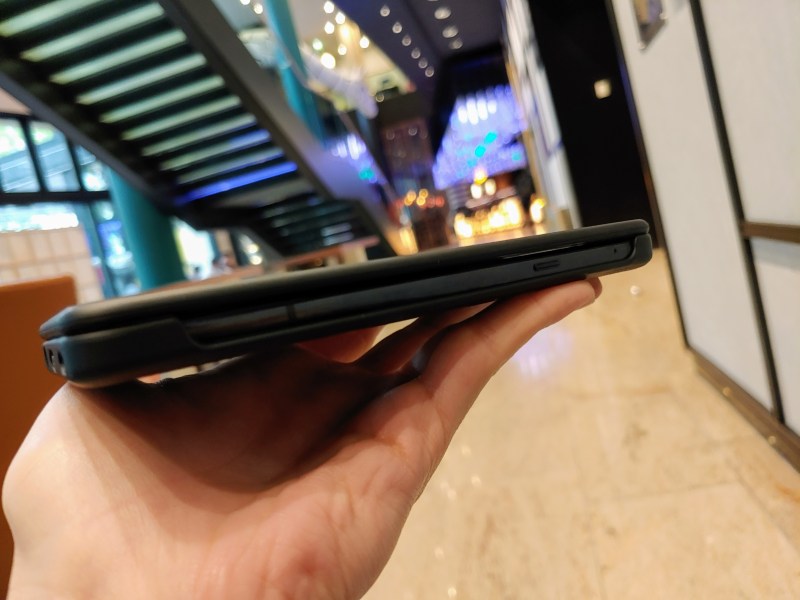 We’d be remiss if we didn’t mention that the new Dual Screen’s OLED display better matches that of its attached smartphone. It’s now the same size (6.4 inches), aspect ratio (19.5:9), and resolution (2340 x 1080 pixels), and it exhibits none of the color imbalance we encountered with the first-gen Dual Screen. It even mirrors the G8X’s top-of-center notch, albeit more for symmetry than any functional purpose.

Nifty software touches with the Dual Screen include the ability to mute content on one screen while increasing the opposite’s volume, plus a camera viewfinder that makes it easier to preview a photo before it’s captured. A dedicated settings menu provides access to controls like a secondary screen brightness slider and a wallpaper selector and offers a means of specifying which app launches when the secondary screen turns on.

A three-finger swipe gesture beams apps from one display to the other, and a dedicated button on the G8X’s keyboard snaps a screenshot of whatever is on the Dual Screen. Speaking of the keyboard, games and apps can relegate it to the opposite screen in landscape orientation, making it less cumbersome to use than before. 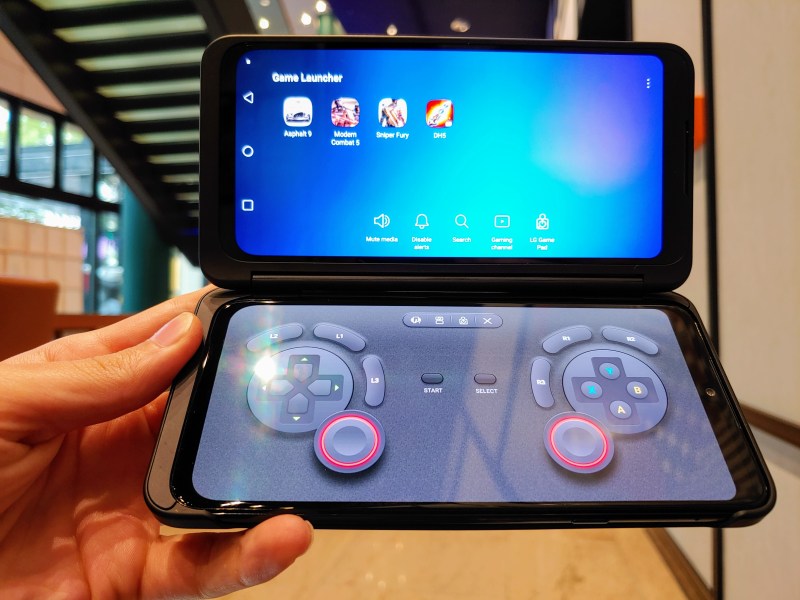 Apps now generally take better advantage of the Dual Screen’s real estate. For instance, a gamepad creator within LG’s Game Launcher lets you select and resize whichever virtual buttons, joysticks, and shoulder buttons you prefer. Configurations can be saved and loaded in a few button taps, and LG says it’s working with developers to craft custom gamepads for titles like Asphalt 8.

The G8X’s preloaded gallery app displays thumbnails on the left screen and the corresponding full-screen photos on the right. Whale, LG and Naver’s web browser on Android, has been optimized for the G8X and Dual Screen. And Chrome extends the full length of both displays, offering a tablet-like browsing experience. 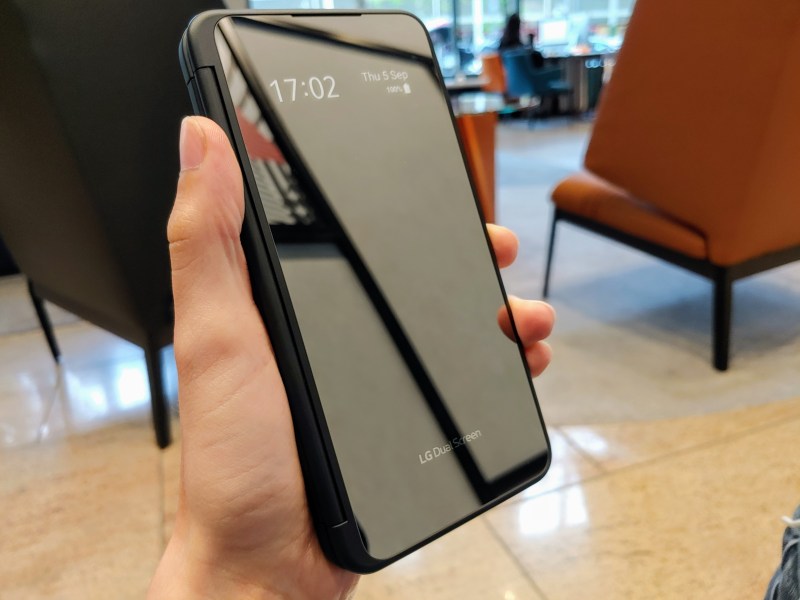 But disappointingly few apps take advantage of the Dual Screen. Sorely absent is an e-reader with a book-like two-page interface, or a video editor with a bifurcated timeline and preview window. Games like the forthcoming Pirates of the Caribbean: Tides of War, which we weren’t able to test, promise exclusive Dual Screen functionality. But it’s too early to tell whether a library to justify the Dual Screen’s $200 asking price will materialize.

That’s all to say that the new Dual Screen is measurably better than the original, excepting perhaps the lack of a battery to call its own. (It draws power from the G8X’s 4,000mAh battery.) But hardware does not a secondary display make. It’ll take substantial development on the software side to improve the current state of things.