I’m in charge of reviews at GamesBeat, so this is a pretty busy time of the year for me with all of the holiday releases coming out. Still, I keep pouring hours into World of Warcraft Classic.

I’ve spent about 8 days of in-game time adventuring with my Dwarf Priest, and I’m still not at the max level of 60 (I’m level 54). It feels like I’ve played World of Warcraft Classic a ton, but I still have so much to do. Most of my friends have been level 60 for weeks and been engaging in endgame content, battling high-end bosses like Onyxia and Ragnaros. To them, I’m going slow. For someone who’s trying to juggle the massive time sink of WoW Classic with my reviewing duties, I’d say I’m doing all right.

But even at my lowly level of 54, I wonder about World of Warcraft’s future, especially with BlizzCon starting on November 1 (that’s tomorrow) in Anaheim, California. I’ll be attending the event, my third BlizzCon in a row. I’m expecting a lot of big announcements this year, like Overwatch 2 and Diablo IV. On the retro side, I’m hoping we get a remaster of Diablo II.

When it comes to World of Warcraft Classic, however, I’m not expecting much.

Classic launched in August and has been a big hit for Blizzard, but BlizzCon is likely to focus on the modern version of the MMO. Leaks suggest that Blizzard will reveal a new expansion for World of Warcraft, one that focuses on death. If Blizzard wants to get people excited about this new expansion, it probably doesn’t want to distract them with a big announcement for Classic.

I am expecting Classic to get some love at the show. Blizzard will probably announce the release date for Blackwing Lair, the next raid. Blizzard is doling out Classic’s original raids and other content over a period of months. This content is the same stuff that came to World of Warcraft before it launched its first expansion, Burning Crusade. 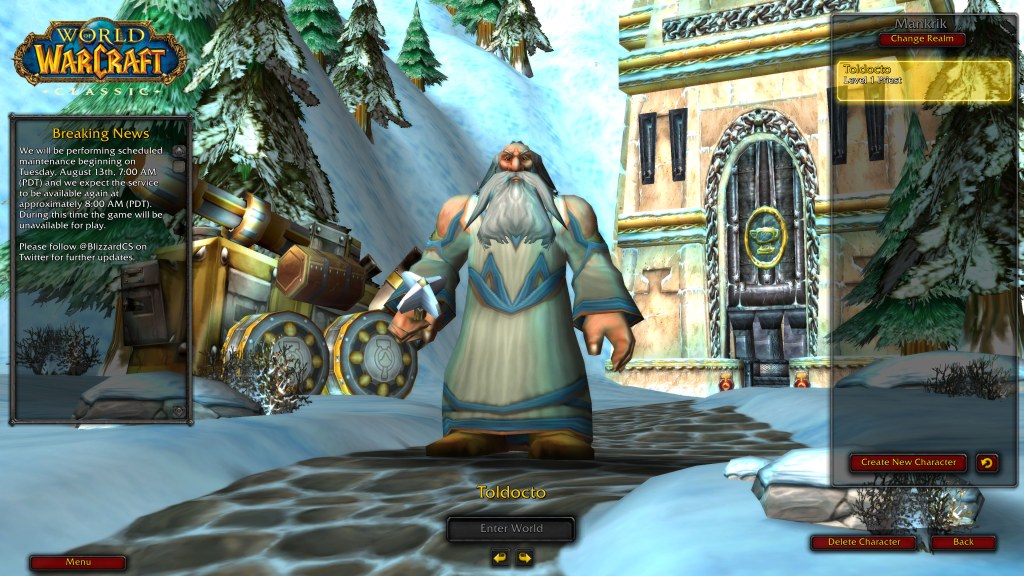 Above: Back when my character was but a sprout.

But what happens once Classic runs out of those raids from the original game? There are two likely scenarios. Blizzard just releases the Burning Crusade for Classic, or it creates new content for Classic.

Whatever Blizzard decides to do, I don’t suspect we’ll find out BlizzCon. Blizzard still has enough content from the original World of Warcraft to keep Classic players busy for about a year. And I suspect that Blizzard is going to want to alternate between updating the modern WoW and Classic, hoping to encourage players to hop between the two.

The announcement of World of Warcraft’s next expansion will be the centerpiece of WoW’s BlizzCon story this year. Classic fans may have to wait another year for an announcement as exciting as that.