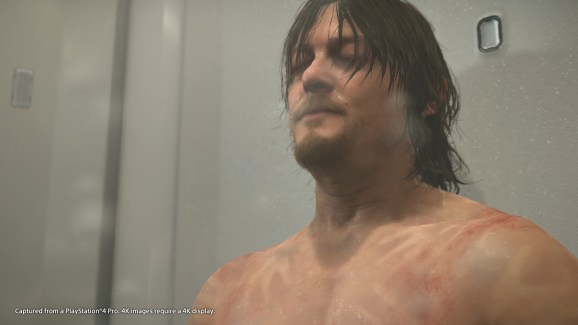 I’ve been playing Death Stranding. That is to say that I’ve played it, but I haven’t finished it. And I’m calling attention to that to make it clear that this isn’t a review. After more than 20 hours with the game, I want to talk about my relationship with it. And why I wish it followed through with its punches.

Death Stranding is going to seem alien and strange to a lot of people. Despite debuting exclusively on PlayStation 4, it’s nothing like God of War, Horizon: Zero Dawn, or so many other Sony tentpoles. Instead,  Metal Gear Solid director Hideo Kojima has made something that has a lot more in common with the kinds of games you would find on PC.

Death Stranding is a parcel-delivery simulator where you are the world’s last great courier. You pick up a mission at one station, and then you take a package of varying mass and volume to another station. The package’s weight and positioning on your character’s body or vehicle affects how you move or drive. The challenge is then navigating the rocky, Icelandic-looking terrain.

In Death Stranding, you need to move a payload across a terrain, and the game is all about dealing with the physics of that job. Like in American Truck Simulator, sometimes the obstacle is just distance and time. But more often, like Spintires, the difficulty is getting something heavy moving at speed and then stopping before you fall into a ditch.

But unlike those games, Death Stranding doesn’t understand how to punish failure.

In Spintires, you can lose the use of a truck if you’re not careful. Thick mud or deep water can cause a vehicle to stop responding. You could start the level over, but the point of the game is that you are sometimes going to lose a truck. And then you have to spend the next several hours trying to figure out how to rescue it.

It’s a mean, frustrating process. It often leads to situations where you lose one truck to the mud and then a second and a third. But it’s also intense and satisfying when you come up with a scheme that succeeds at pulling your 8-wheeled flatbed out of the gunk.

Death Stranding is afraid to get that mean. You can lose mission-critical packages if enemies attack you or you trip in the water. But Kojima’s game doesn’t really expect you to try to go after them. You can. But only up to a point. Eventually, they will disappear. And sometimes they will end up in situations where your tools just can’t help you get them. Like if they float out into the middle of a body of water or if a monster disintegrates them.

What you are supposed to do is go back to the original point where you got the mission and ask it to redeploy the cargo. You then just run the same path back to your destination.

But what you’re really supposed to do is load a save. Just go back and start over.

Both of those options feel crummy though. For one, it feels like you’re cheating. I can just keep printing out the cargo until I get it right without consequences? And second, it stinks to have to re-walk the same path.

It might seem kinder to let players load a save and try again. But it’s so much worse to lose that progress. I would rather spend 100 minutes chasing after a package that a monster whisked away than spend 20 minutes repeating a mission.

Death Stranding should have the courage to treat the player with that kind of cruelty.