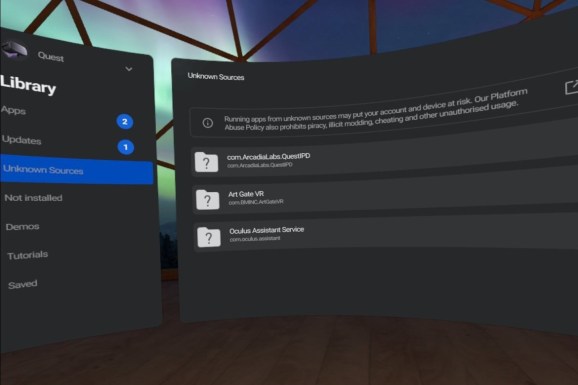 A new application package on the Oculus Quest seems to indicate that the device may receive a feature called the “Oculus Assistant” in a future update.

The application appears in the Quest’s v10 firmware, listed under the ‘Unknown Sources’ tab of the library for those who have enabled Developer Mode on their device. The package is titled ‘Oculus Assistant Service’ (com.oculus.assistant), as pictured below.

At the moment, you can open the package and it will request audio permissions. If you allow the request, it opens up a grey window, similar to the one pictured above, in the Oculus Quest house UI which is totally blank except for a small spinning loading circle. At the top of the window is a heading banner with the title “Assistant Test Service”. The loading wheel seemingly never finishes loading and that’s as far as I got with the app on my Quest while testing.

Presumably this package is for part of a new system feature currently in development for the Quest. The ‘Oculus Assistant’ title is reminiscent of other voice command and assistant services like Google Assistant, and we already know that Facebook are developing an AI assistant for their headsets. Given that the test app package also asks for audio permission upon launch, it seems very likely that the feature will be an assistant for the Quest OS that is operated by voice commands.

We contacted Facebook with some questions seeking clarification on the feature, but a spokesperson responded that they “don’t have any further details to share.”

A voice assistant would go nicely with the Quest’s upcoming finger tracking update – paired together, you would be able to simply put the Quest on and use your fingers and your voice to operate the device, no Touch controllers required.