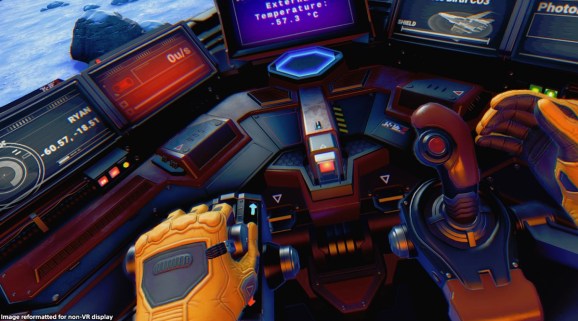 You can use your hands to fly a ship in No Man's Sky Beyond VR.

Hello Games provided a new development update on No Man’s Sky: Beyond, announcing some new features and bug fixes for the popular space-exploration game.

The development update accompanies Patch 1.25, which releases today, and includes new weekend missions and featured bases, among other minor updates and bug fixes.

Weekend missions are probably the biggest addition in this patch. They feature a new chapter available at the Nexus, once a week from Friday evenings (GMT) until early on Monday morning. These new weekend missions will run for “the foreseeable future” and will change every week in No Man’s Sky, naturally, offering something new for regular players on a recurring basis. Hello Games also gave a description of this first mission, starting this weekend, as follows:

“Nada’s spacetime loom has detected a concerning pattern resonating across the universe, and they need help from their explorer friends to investigate. Readings indicate a disturbance in reality, where an anomalous – and possibly sinister – force has begun to leak through to this universe…”

In general, the team also noted that their player numbers are now at the highest they’ve been since launch, with both VR and non-VR modes remaining popular in No Man’s Sky. Hello Games assured players that they’re also still working on a number of requested features from the community behind the scenes, which are still coming but weren’t announced today.

There are also a variety of smaller changes and bug fixes, which you can view in full here.