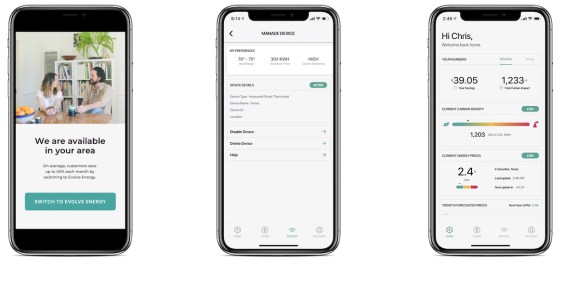 Evolve Energy is tapping machine learning and analytics to give wind- and solar-powered electricity customers the ability to capture the best wholesale energy prices as they fluctuate over the course of a day. The company publicly launched its renewable energy-focused service and app today on iOS and Android.

This approach makes sense in a deregulated energy market. “A deregulated market is where the state has chosen to allow third-party providers to structure and sell electricity at what they think is a competitive price,” explained Evolve Energy CEO Michael Lee to VentureBeat in an interview. “In these markets, consumers can choose who to buy energy from, and utility mostly just owns the poles and wires.”

Texas, where Evolve Energy is based and licensed as one of those aforementioned providers, is one of 18 U.S. states with a deregulated energy market. Lee said the emergence of wind and solar power has contributed to price volatility in the wholesale market in the state, which represents a big opportunity for Evolve Energy.

In a wholesale energy market, Lee explained, customers would typically pay a flat rate. Throughout a given day, the cost of electricity will wax and wane somewhat depending on a variety of factors, but providers’ pricing would take that into account. The problem with wind and solar is that the quantity of electricity those systems provide depends on the weather. When there’s less wind and sunshine, other power sources have to make up for the demands on the grid, driving prices up. This makes it more difficult for wholesale providers to predict and adjust prices.

Evolve Energy’s ace in the hole is that its business model isn’t about making money by selling electricity. Instead, it’s based on a $10-per-month service subscription fee. Rather than pocketing a markup or building in a buffer for a flat-rate system, the company passes the wholesale prices through to customers as those prices change in real time. “And by doing that, we are now aligning our interests for our customers to no longer sell them … electricity, but to become an advisor to our customers,” Lee said. The volatility is actually to Evolve Energy’s advantage.

The company’s AI -powered app ties into customers’ smart thermostats, although Lee said there are plans to also tap into smart heaters, appliances, and electric vehicles in the future. When energy prices are likely to spike, Evolve Energy’s AI may predict the surge 30-45 minutes ahead of time and proactively respond. For example, if there’s a price spike at, say, 5 p.m., the app can cool someone’s house before they get home based on parameters the customer preset, or look at a customer’s usage history and automatically adjust and target that. The system determines how much energy the customer is likely to need to hit their desired home temperature and intelligently uses the optimal interval for prices to get there. “So when they get home, all they know is that their house is the temperature that they want,” Lee said. The customer doesn’t have to do anything.

Evolve Energy’s app is currently compatible with Honeywell and Ecobee devices. (The Nest API changed because of the “Works with Google Assistant” shift this summer, so it will be a couple of months before the Evolve Energy app will work with Nest devices, Lee said.)

He added that the tools Evolve Energy uses are already out there. “These tools are already available, and they’re being used to sell us political ads. They’re being used to sell us more clothes,” Lees said. “[But] these tools can be used to really improve our customers’ lives. The technology includes pulling in real-time data, like how and when customers are using electricity, ambient temperatures, time of day, duration, patterns in preferences and behaviors, and so on. All of those factors are categorized in a database, clustering customers according to usage similarities.”

Based on that data, Evolve Energy runs a recommendation engine that tells customers what it’s going to do for them. Customers can override the recommendations if they choose, and the app will instantly inform them what the resultant costs will be. It’s a balance, Lee said, involving transparency, control, and feedback.

It’s early days for Evolve Energy, which has essentially been operating its product in beta up to now, training its models on internal historical data. Over the next few months, it plans to keep training existing machine learning models on customers’ real-world usage.

The niche Evolve Energy is playing in, plus the specificity of its model and the limited number of compatible devices it works with, might seem like limitations on the company’s addressable market. But Lee isn’t worried. “There’s several million residential customers just in Texas alone. That’s an enormous market. We think they spend over $15 billion a year on electricity.” Other similarly deregulated markets include California, which is the country’s most populous state.

Lee said that Evolve Energy can work with partners even in regulated markets — and in international markets — and it plans to create a similar offering for commercial and industrial partners in Texas.

Other players in the energy monitoring game include Sense, Budderfly, and LevelTen Energy.