Juked.gg is launching an open beta for its platform that makes it easy for fans to watch esports broadcasts for their favorite teams or personalities.

Juked is a guide to the wide world of esports that makes it easy to stay on top of every trending match from popular games and teams, featuring support for over 20 titles. In addition to showcasing content, Juked is designed to provide answers to the most common issues esports fans face on a daily basis.

If you’ve ever missed an epic moment in esports because you didn’t know when to tune in, where to find the broadcast, or why you should care, Juked is for you, according to the pitch from founders Ben “FishStix” Goldhaber and Chris “ChanManV” Chan. I interviewed them about the business at the recent Esports BAR event in Miami.

“We want to create essentially the best way to watch esports,” said Goldhaber. “As much as esports has grown over the last decade, it’s incredibly fragmented and super difficult for any outsider to understand what’s happening. Even if you’re someone like either of us who’s embedded in the community, it’s a pain to stay on top of what’s going on.”

Juked anticipates what fans need to know and puts it in one place. This includes aggregating and indexing every esports broadcasts (live, upcoming, and VOD) and related data (brackets, standings, schedules, results, player profiles, and teams) into one viewing app, so fans can easily stay on top of their favorite games, teams, and players. 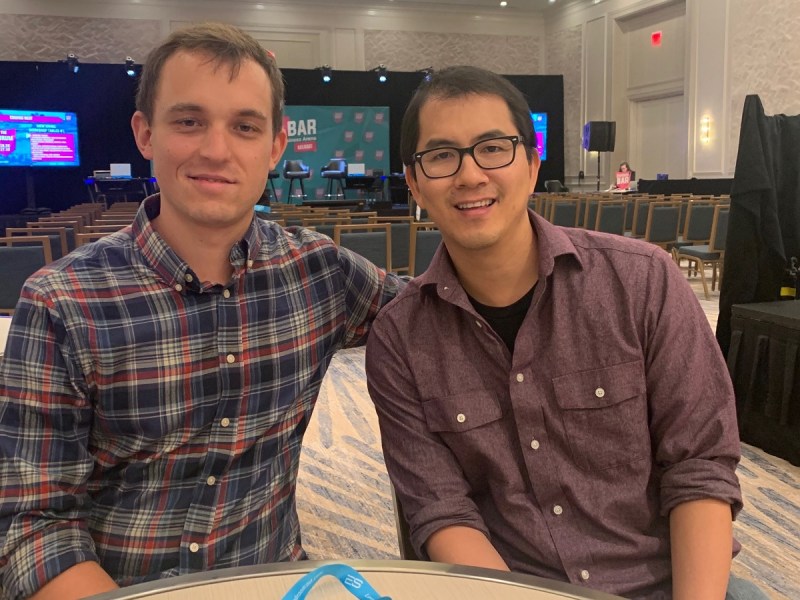 Above: Ben Goldhaber and Chris Chan are founders of Juked.gg.

The Juked beta also features an industry-wide esports events calendar which allows users to set reminders for when individual matches or tournaments go live. It can be sorted and filtered by favorite games and teams.

The founders started San Francisco-based Juked because they were frustrated by the lack of a good way to follow the biggest leagues, tournaments, and events in esports. Casual fans and hardened insiders alike feel this problem on a daily basis—with dozens of relevant leagues, tournaments, and events happening every single week, staying in the know has become a constant chore. And this problem is only getting worse as new esports games continue to launch every year.

“When you land on our homepage, you’re going to instantly see all of the live streams, all the live events that are happening right now,” Goldhaber said. “It can be filtered by game by team or by your favorite player. So when you’re watching on Juked, you’re also getting all this context that you wouldn’t necessarily see on Twitch, YouTube, or any other platform. You’re going to get the brackets, you’re going to get the standings, you’re getting the player profiles, the team profiles, the prize pool, the schedule.”

Goldhaber was previously the director of content marketing at Twitch, where he worked from 2011 to 2018. His roots in esports began in 1999, and he played first-person shooters competitively for a decade. He then began doing commentary and streaming in 2008, and in 2010 he launched GamesCast.tv, the first aggregator of live esports content.

This project led to him getting hired at Justin.tv as the first full-time gaming employee, just four months before the launch of Twitch. His initial role at Twitch was as a partnership manager interfacing with and managing relationships with the biggest esports leagues and events on the platform, before moving up to his director position. GamesCast.tv was both a precursor to Twitch and Juked.

Above: Juked follows more than 20 esports.

Chan’s background includes 15 years of experience in software and product engineering. He was also a top-rated WarCraft 2 and NBA 2K competitive player and created several of the most popular podcasts in esports over the last seven years. This includes Value Town, Unfiltered, and The OverView, the latter of which Goldhaber was a co-host.

Most recently, he was the head of product, marketing, and strategic partnerships at Hearthsim, an esports analytics company which created HSReplay.net, and is the CEO of Visual Core, creator of popular online game show Streamer Showdown.

The company started in March and it has raised $500,000 in funding. It has begun hiring its staff.

Over time, the company will add a premium subscription model.

“First and foremost, we were focused on tackling this problem, which we think is discovery, making it easy to discover the best content in esports,” Goldhaber said. “And we’ll be creating additional features where our pro users can pay extra to access pro features on the site. So that’s primarily what we’re looking at for business model content.”