60% of teens rarely discuss inappropriate online behavior with parents, according to a study of online behavior by gaming world creator Roblox. That shows there’s a failure to communicate between parents and teens.

San Mateo, California-based Roblox interviewed more than 3,500 parents in the U.S. and 580 teens, and it found a pretty big disconnect. While 93% of parents say they discuss appropriate online behavior with their kids at least “occasionally,” teens disagree, with 60% of them saying they rarely or never have such discussions.

The Digital Civility Survey commissioned by Roblox, a global online entertainment world with more than 100 million people concluded that there is a real opportunity to better prepare kids and teens for interactions in the online world.

While 91% of parents also believe their kids are likely to come to them for help if they experience issues like online bullying, teens are more likely to report such issues to the platform where they occurred (53%) or tell another adult (33%) than talk to their parents (26%). When asked to share advice with their younger peers, teens recommend reporting bad behavior, blocking strangers, or telling someone.

“This data highlights the importance of initiating potentially uncomfortable conversations about appropriate online behavior and keeping open communication channels with your children,” said Laura Higgins, director of digital civility at Roblox, in a statement. “The internet is a vast and daunting place, particularly for those of us who didn’t grow up in the digital world, but getting involved in our kids’ digital lives is our best chance to raise a generation of empowered digital citizens. Simply checking in every day to see what your kids are experiencing online will help build a trusting and open relationship, encouraging them to ask you for help when they need it most.”

Millennial parents are better at monitoring their children’s online activities 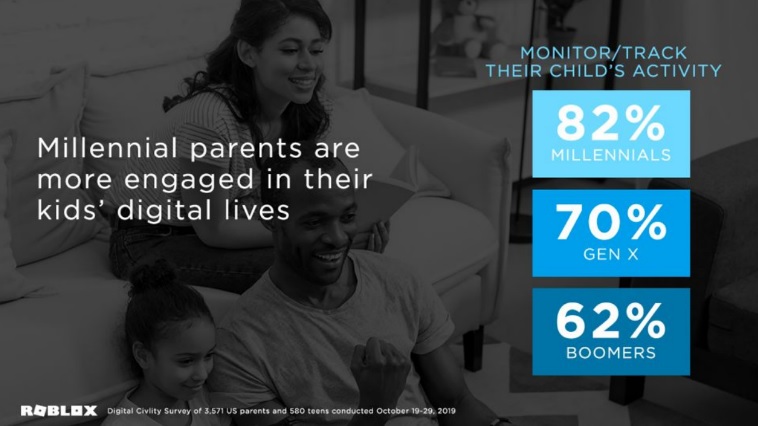 Above: Millennial parents do a better job engaging with kids’ digital lives than Gen X or Boomers.

Survey results revealed generational differences when it comes to parental involvement in children’s digital lives. In comparison to Gen X and baby boomers, millennial parents spend more time monitoring their kids’ online behavior, with 68% saying they are “very aware” of their children’s online activities compared to less than half of Gen X and Baby Boomer parents (48% and 47%, respectively).

Despite these differences, millennial, Gen X, and baby boomer parents who don’t monitor their children’s behavior do so for nearly the same reasons:

“It can feel intimidating at times to keep up with the fast pace of which apps and devices our children use. This requires parents to educate themselves and ensure they understand how functions like chat work on a platform, or how to report bad actors and harmful content,” said Stephen Balkam, CEO of the Family Online Safety Institute, in a statement. “We also encourage parents to sit down with their kids and familiarize themselves with the platforms together. This creates an opportunity to have a meaningful conversation about safety and protecting personal information.”

Online, teens often meet bullying, but they help each other out 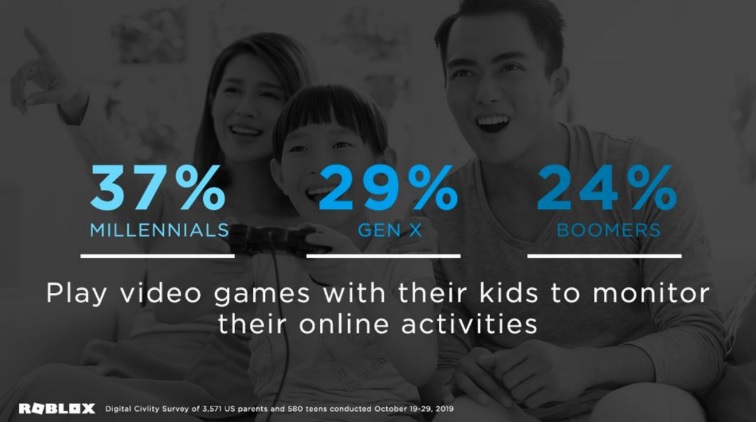 Above: Boomers don’t play games with their kids as often as younger parents.

Parents and teens are strongly concerned about online bullying, with the majority of parents (91%) and teens (77%) saying it’s at least somewhat of a problem for young people today.

Slightly over a fifth (22%) of parents have reported incidents with their kids, and one in five teens (19%) said they had dealt with online bullying in the past 12 months. Additional survey findings:

“While some platforms strive to create a safe environment for younger users and are relentless in combating bad actors, teens may opt to use more open platforms — like unmoderated chat apps — in tandem with curated ones to bypass restrictions and push boundaries,” added Higgins. “Unfortunately, such freedom also allows ‘banter,’ bad language, and a lot of bravado, so it’s important for parents and caregivers to understand where their kids are hanging out online and how they are weaving social platforms together. While we can’t always control what our kids see on the internet, we can help shift control back to the kids by empowering them with the tactics and tools to handle bad actors or bad behavior.”

The significance of digital play 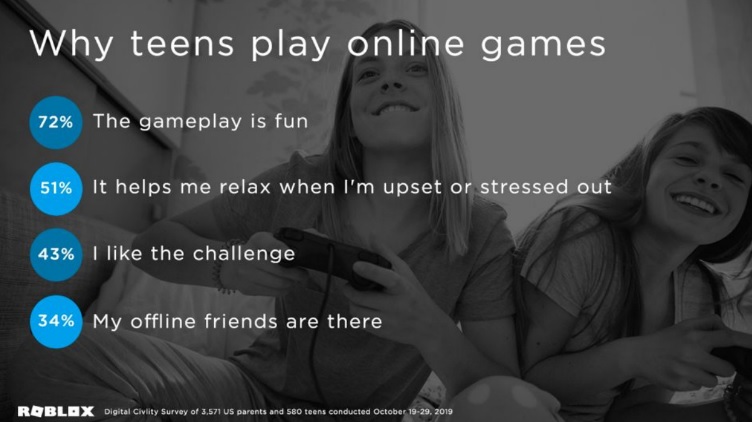 Above: Teens use games for fun and de-stressing.

The majority of teens play online, enjoying the fun, relaxing after a stressful day, or seeking a challenge. For over a third (34%) it’s where their friends hang out. Of the 580 teens surveyed, 78% play online games at least once a month, and more than half of teens (55%) play several times a week or more often, underscoring just how significant digital play is in teens’ lives today.

For many it also brings a frequent boost of confidence — a quarter of teens (26%) say gaming is what they are best at and it makes them feel good about themselves. Moreover, 42% of teens who play online report frequently giving compliments to other players, and over a quarter (26%) report also receiving compliments when playing games online, though males are more likely than females to report this — 33% vs. 16%.

The full results from the Roblox Digital Civility Survey can be found here.

This online poll was commissioned to SurveyMonkey as part of Roblox’s Digital Civility Initiative and conducted October 19-29, 2019, among 10,000 US adults, including 3,571 parents of children age 7-17 (922 of them are millennials), and 580 teens, 430 of whom play online games once a month or more. Respondents for this survey were selected from the more than 2 million people who take surveys on the SurveyMonkey platform each day.