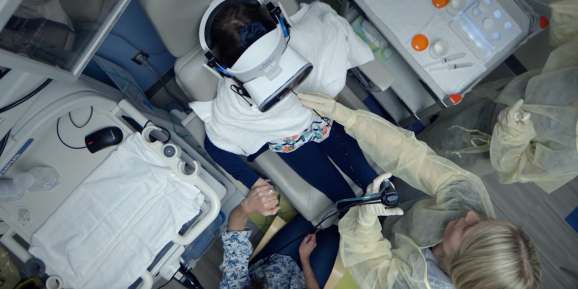 Whether you’re an adult or a child, medical procedures can be intimidating or uncomfortable enough to cause panic — one reason patients might need to be knocked out with general anesthesia. But Lenovo and the Starlight Children’s Foundation have been pilot testing virtual reality headsets as an alternative to general anesthetics for kids, alleviating panic and pain by distracting critically ill pediatric patients from what’s actually happening around them.

Starlight’s pilot has been underway at hospitals for the last year, and just as doctors have found VR highly useful in medical training, practitioners have realized that the clinical potential of VR-based distraction therapy for kids is profound. As illustrated in Lenovo’s recently premiered short film, New Realities, doctors have successfully performed even invasive procedures such as endoscopy with only local anesthetic, while other procedures require no anesthetic when coupled with VR.

“The human brain has a limited bandwidth for what it can pay attention to,” explains Children’s Hospital Colorado’s Child Life medical director Joe Albeitz, MD, one of the Starlight program’s participating pediatricians. “The more I can engage you in that virtual experience, the less your brain is able to perceive the pain signals that are coming through. And if it’s not paying attention to them, they may as well not exist.”

For the time being, the technology is basically off the shelf: Lenovo’s Mirage Solo VR headsets running common games and apps, all curated by Starlight (rather than Google) for age-appropriate content. Pioneering children have worn the immersive gear during lumbar puncturing spinal fluid draws, dressing of damaged limbs, and other procedures, effectively enjoying entertainment rather than focusing on either medical equipment or their injuries.

“It is having a profound impact on the quality of life of our hospitalized children,” says Albeitz, noting that kids often need sedation for otherwise distressing procedures. “We are seeing children who used to require general anesthesia now able to be fully awake with minimal medications.”

Going forward, Albeitz expects that VR could be used to virtually transport sick kids from their hospital beds back to normal life. “We might be able to get the technology to the point when we can put them in their own classroom, in real time, with their teachers and their classmates,” he suggests. “We could put you at the dinner table, so you can still share those experiences with your family, no longer being disconnected.”

The program is a collaboration between Lenovo, Starlight, and mobile device management provider SOTI, which is helping the charitable foundation deliver the solution to “thousands of children at hundreds of hospitals.” Their New Realities short film premiered today at the Denver Film Festival in Colorado, and is certainly worth seeing here.