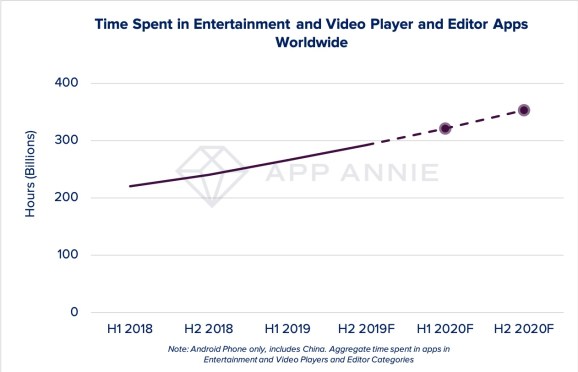 App Annie collects a lot of data on mobile devices, apps, and games. And so the mobile insights and analytics company has five predictions for the year ahead in mobile.

The company said that 2019 was a landmark year for mobile, with 20% year-over-year growth in consumer spending in the first three quarters of the year — including a record $23 billion from the iOS App Store and Google Play combined in the third quarter of 2019 alone, compared to nearly $20 billion a year ago.

2020 is set to be even bigger, with global consumer spend from iOS and Google Play combined hitting $105 billion (excluding third-party Android stores), compared to $90 billion expected for 2019. Subscription services will drive much of this growth, with games being the newest vertical to capitalize on this monetization trend.

Here are the five predictions for 2020 that App Annie believes will help mobile app and game publishers and developers.

1. The streaming wars will heat up in 2020 as consumers spend 674 billion hours on mobile

In 2020, App Annie is expecting consumers will spend 674 billion hours in the entertainment and video player and editor categories worldwide on Android phones. This is up from an expected 558 billion hours in 2019. Established players like YouTube and Netflix accounted for the vast majority of time spent on Android phones, but newer entrants are eager to get a piece of this growing pie.

The recent launch of Disney+ represents just one of the many well-funded competitors entering an already crowded space. At a price point of $7 per month, which includes the ability to have up to 4 simultaneous streams, Disney+ will be a strong addition to Disney’s stable of streaming offerings that already includes Hulu and ESPN, App Annie said.

Although Disney+’s content library is relatively small — 500 movies and 7,000 individual TV episodes — it includes access to established fan favorites from its other entities, including The Simpsons, Star Wars, and the Marvel Cinematic Universe. Further, Disney is investing in new, original content by leveraging its popular intellectual property (IP) to create the Star Wars-based series, The Mandalorian. Strong IP can generate excitement among consumers. This was noteworthy in the case of the wildly successful Mario Kart Tour launch in September 2019.

Despite its strong properties, Disney+, along with other competitors like Apple TV+, HBO Max (AT&T) and Peacock (Comcast), will need to establish innovative and desired series to cultivate viewing habits. This can be done through original series or innovative content formats — like Netflix did with Black Mirror: Bandersnatch. Bundling services through partnerships, as Disney and Verizon have done, will help establish consumption habits that separate the winners from the losers.

Competition also comes from social media, where Gen Z goes to fill spare time and find entertaining content. Social apps like TikTok, Snapchat and Instagram are blurring the lines between social media and entertainment, resulting in more competition for consumers’ time. Twitch — traditionally a video game live-streaming platform — has also branched out into other forms of content. The “Just Chatting” genre, which focuses on streamers interacting with their audience rather than gaming, was the 3rd most popular channel by total hours watched on Twitch in the first half of 2019.

In the short term, App Annie expects new streaming services to drive growth in downloads, usage and revenue as consumers trial these new services. Further, we expect new partnerships to emerge to form new subscription bundles. To stay competitive in this space, streaming services will need to identify which competitors are long-term threats versus which are simply burning through advertising budgets. App Annie recommend publishers track retention rates, time spent, and active users to gain deeper insight into whether competitors’ services are catching on. 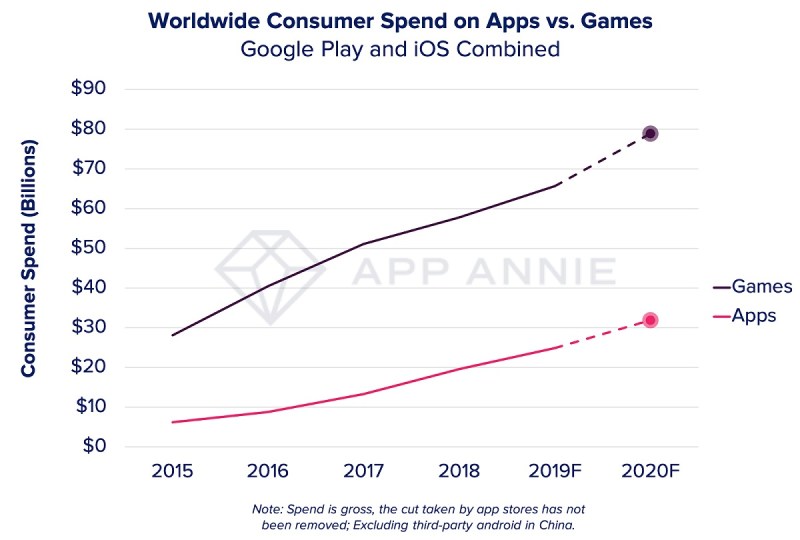 Above: Consumer spending on apps and games, compared.

Game publishers are usually the early adopters in all aspects of mobile, with new features and monetization models that then spread to other verticals. With subscriptions, it’s the reverse. As spending on mobile now accounts for over 50% of all gaming revenue in the global games market, subscriptions will drive deeper engagement and greater customer lifetime value (LTV).

This trend is picking up in mobile in general. During the 12 months ending September 2019, over 95% of the top 100 non-gaming apps by consumer spend on iOS App Store and Google Play combined in the U.S. offered subscription services directly through in-app purchases. In addition, worldwide consumer spend on games is expected to surpass $75 billion in 2020.

By paying for subscription services, consumers gain access to a wider variety of content and services for a fixed fee — something that Gen Z consumers are particularly fond of. Subscription services will also create opportunities for games that haven’t found success with in-app purchase or advertising monetization models.

Apple Arcade offers a subscription to a collection of exclusive games at a fixed-fee; however, Google Play Pass provides a subscription to games that are otherwise live on the Google Play store. For Apple Arcade, this means developers are free to design new game mechanics without the constraint of integrating free-to-play dynamics. For Google Play Pass, existing games could get a second wind by finding new revenue streams beyond their existing in-app purchases or in-app advertising.

These subscription services will work particularly well for families. A curated environment where everything is included for one flat price will be a draw for parents looking to reduce their children’s requests for in-app-purchases. This also has potential to resonate with those who already identify as gamers by providing continuous access to innovative, well-designed games for one price.

Both Apple Arcade and Google Play Pass will be important complements to their existing app store models. Regardless of initial performance, these subscription services will play key roles in long-term mobile gaming strategy — providing the opportunity to further strengthen the broader mobile gaming ecosystem. However, it will be challenging to get consumers out of the mindset of expecting all games on mobile to be free to download. To combat this, publishers will need to work alongside iOS and Google Play to communicate the value of game subscription services.

3. 5G is the next battleground, and gamers will be first to reap the rewards 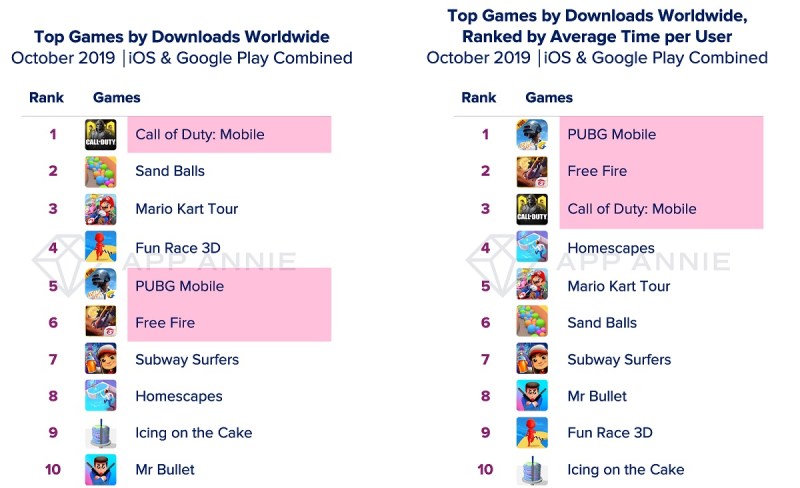 Above: Multiplayer games are taking off on mobile.

While speed has been the main talking point around 5G, it’s the low latency that excites gamers and publishers alike. Demand exists for mobile online multiplayer core games that rely on better wireless connections. In October 2019, Call of Duty: Mobile was the top ranked game by global downloads across iOS and Google Play in its first month of release, while PUBG Mobile, and Free Fire continued to rank 5th and 6th respectively by downloads, more than a year after their initial launches.

Among the top 10 games by downloads in October 2019, core multiplayer online games also had the most time spent user. 5G is still in its infancy, but telcos are moving to expand coverage in 2020, and gaming is likely to be the first test of market validation.

While gaming may be the frontrunner for leveraging 5G, the possibilities don’t stop there. The 2019 Ericsson Mobility report predicts that by 2024, 34% of all global mobile traffic will be on 5G, and 64% of the world’s population will have 5G coverage. Increased access to a faster 5G network and 5G compatible devices will streamline existing mobile pathways, further entrenching mobile in our daily life.

App Annie expects 5G’s true potential to be initially legitimized by game publishers and gamers — the early adopters of the mobile economy — before expanding to support industrial applications like agriculture and logistics through the development of driverless cars and connected devices or the internet of things (IoT). Publishers should act now to ensure future versions of their apps can take advantage of faster 5G connections, while looking into version updates to see which of their competitors are doing the same, App Annie said.

4. The auto battler game genre Is primed for growth 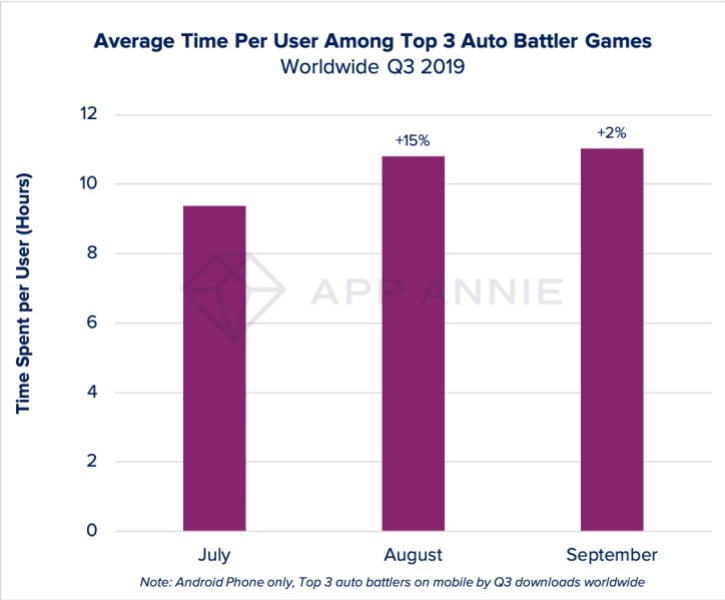 Auto Battlers began life as a modification of Dota (Defense of the Ancients) that quickly grew in popularity on Steam. As of November 2019, numerous mobile versions are available from some of the biggest gaming developers, including Dota Underlords (Valve), Auto Chess:Origin (Dragonest Game/Drodo) and Chess Rush (Tencent).

The Auto Battler genre lends itself to mobile — the game format is simple and doesn’t require the precision of a mouse and keyboard — but developers still have opportunities to further optimize the experience and make this genre attractive for a wider range of players.

The genre has already become of interest to eSports fans, with the first Auto Chess Invitational offering a $1 million prize pool, which will support adoption on mobile, and growing time spent per user on mobile. This is impressive for a genre that only started in January 2019.

As King discussed with App Annie, players are open to playing hybrid games that draw on different mechanics and design elements from across genres. App Annie’s cross-app usage data helped King identify these opportunities. In 2020, expect to see further optimization of the Auto Battler genre for mobile. The rise of Auto Battlers calls attention to the fact that popular games are increasingly drawing on mechanics from multiple genres. Moving forward, publishers need to look beyond existing app store game classifications, and leverage data to create new games that grab consumers attention.

5. Progressive web apps will become an important link in the consumer journey 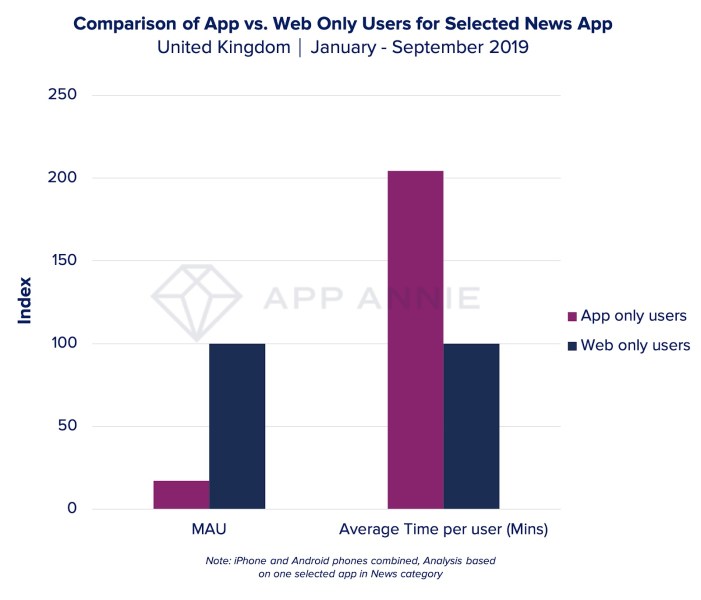 Progressive web apps (PWAs) are mobile websites that look and feel like apps — ensuring a smooth user experience — without requiring users to immediately take the extra step of downloading an app.

PWAs can help increase conversions by simplifying the user experience. This is particularly important as it allows users to trial or use a more limited version of an app with less friction than a mobile website. It also has the added benefit of speed. PWAs have faster loading times than websites. This is particularly valuable where connectivity is poor and in developing markets where App Annie sees the lite version of an app has similar levels of popularity as the full one. In India, for example, Facebook Lite had nearly 90% of the downloads of Facebook in H1 2019.

While PWAs are generally less valuable for apps that require sign-in to leverage full functionality (e.g banking and communication), they will be a valuable option for verticals such as travel, retail and news — where users can test an experience before committing further. For example, Trivago, a hotel booking app, has found success with PWAs, seeing a 150% increase in engagement among those who used the PWA versus the mobile site.

PWAs form a bridge between mobile web and app experiences. While converting users to download your app is still important to ensure optimal consumer experience and retention, their first encounter with the brand will likely happen elsewhere. In addition, distribution and functionality of PWAs are subject to guidelines of app stores and browser functionality. This means that native apps should still be the primary focus on mobile.

PWAs will help widen the top of the funnel and prevent consumers from dropping out as you transition users towards your app, by providing a seamless user experience at every stage and acting as a bridge in your mobile web and app strategy. Brands — especially those in the news, retail and travel sectors where quick loading and availability in low connectivity environments are important — should look to include PWAs in their customer acquisition funnel, App Annie said.