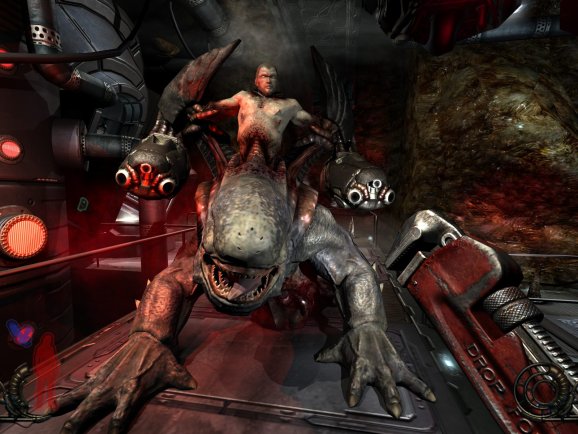 An enemy from Prey by Human Head Studios.

Doors are both closing and opening in the game development business today. Developer Human Head Studios is shutting down today after just launching Rune II on PC earlier this week. Human Head produced the original Prey and supported blockbusters like BioShock Infinite and Batman: Arkham Origins. But that company is dissolving. And in its place, Bethesda Softworks is launching a new dev house with the Human Head team called Roundhouse Studios.

Roundhouse creative director Chris Rhinehart said that Human Head was no longer viable. And the team wanted to stay together, and that led them into the embrace of the Elder Scrolls and Fallout publisher. With the help of Bethesda, everyone from the now defunct Human Head will continue to have a job if they choose to come along.

“Sadly, we had to wind down the business of Human Head Studios and close its doors, which was particularly devastating due to the passion and creativity of the team we’d assembled,” said Rhinehart. “We reached out to our friends at Bethesda for help, and they saw that same creativity and passion in our team. With the formation of Roundhouse Studios, Bethesda offered every employee of Human Head a position at the new company. We are excited our team will remain together, pursuing the work we love, as part of a company we already know and admire.”

Rune II will continue without support from Human Head

This means that Human Head will not support Rune II going forward. But publisher Ragnarok Game, LLC says that it is putting together a team to take over those responsibilities. Ragnarok also said it had no idea that Human Head was shutting down.

Here’s Ragnarok’s statement on the situation:

“Today, developer Human Head Studios announced that they closed their doors and will be starting a new studio. This is shocking news to us, as there are several entities working on RUNE II – we found out about this news when you did.  Human Head had a longstanding agreement with RUNE II’s publisher, Ragnarok Game, LLC, to provide ongoing support for the game. We are working quickly to resolve any current technical issues while we build the team that will execute the exciting planned future of RUNE II’s post-launch content strategy. We appreciate your patience and understanding while we work through any launch issues.”

“Our plan remains to continue working on RUNE II and launch onto other PC platforms in 2020. We’re excited to show you the future of RUNE II content. Stay tuned!”

For its part, this move adds Roundhouse to a roster of developers that includes Bethesda Game Studios, MachineGames, Arkane Studios, and id Software.

“While sorry to hear of their challenges as Human Head Studios, we were excited by the opportunity to bring under the Bethesda umbrella this talented, established development team,” Bethesda development boss Todd Vaughn said. “We are delighted that the entire staff will remain together and is now part of the Bethesda family.”

Meanwhile, Rune II is available on the Epic Games Store for $30. So it’s unlikely that the game will show up on other platforms without some extra work. Whether or not that had anything to do with the closure is unclear. I’ve reached out to Human Head for more information about what led to the end of the studio.

For now, however, the former Human Head staff should continue to get paychecks. They will also get to keep making games together. So that is likely a win for many of the people involved.