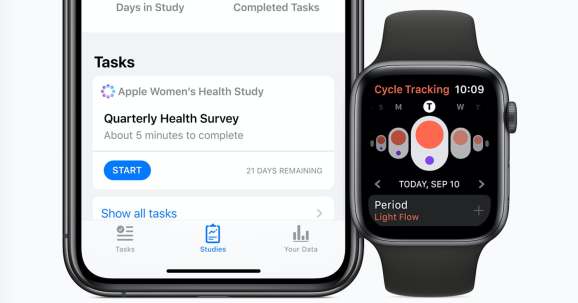 Following the debut of iOS 13.2, which included under-the-hood support for a new optional medical study app called Research, Apple today released both the standalone app and its first three studies: the Apple Heart and Movement Study, the Apple Women’s Health Study, and the Apple Hearing Study. The free app works on a paired iPhone and Apple Watch, gathering data that can be used by academic researchers to advance various health initiatives.

Available for the Apple Watch Series 1 or later, the new Heart and Movement Study goes beyond the previously released Apple Watch heart study app to broadly investigate the relationship between cardiovascular health and mobility. Apple has partnered with the American Heart Association and Brigham and Women’s Hospital for the study, which looks at a user’s heart rate and rhythm to spot early signs of atrial fibrillation, heart disease, or declining mobility, with the goal of offering interventions to help users live longer and healthier.

Developed by Harvard and the National Institute of Environmental Health Sciences, the Women’s Health Study claims to be the “first long-term study of this scale and scope” to examine the relationship between menstrual cycles and “certain behaviors and habits” in women’s health. Using the iPhone and Apple Watch, this study will track menstrual cycles and take monthly surveys to suss out links between menstruation and health conditions such as infertility, polycystic ovary syndrome, osteoporosis, and menopausal transition.

Apple is also leveraging the ambient sound measurement features of watchOS 6 for the Hearing Study, co-developed with the University of Michigan. The goal here is to determine the impact of noise on hearing, stress levels, and cardiovascular health over time. Combining Apple Watch and iPhone headphone data, researchers will look at both headphone usage and environmental sound exposure measurements and determine whether users who receive in-app warnings will modify their listening behaviors. Apple says it will share data with the World Health Organization in an effort to reduce hearing loss by advancing safe listening practices.

“Today marks an important moment as we embark on research initiatives that may offer incredible learnings in areas long sought after by the medical community,” said Apple COO Jeff Williams. “Participants on the Research app have the opportunity to make a tremendous impact that could lead to new discoveries and help millions lead healthier lives.”

The Apple Research app is available now from the iOS App Store as a free 29.2MB download for users 12 and up. It includes the Apple Watch app, which will automatically install on the wearable during iPhone installation, initially displaying a very basic screen with “0 total tasks completed” and “0 pending tasks.” The numbers increase as you add research studies using the iPhone, seemingly with little direct interaction — thus far — on the Watch, which will serve as a passive data gatherer for the studies.

Gallery: Signing up for an Apple Study

Users can opt into the research initiatives they’re interested in supporting directly from the iPhone, and opt out at any time, following privacy and ethics guidelines developed by Apple, a “research ethics committee,” and each study’s specific partners. The process for a single study involves multiple steps — signing legal documents, including state-specific disclosures and a HIPAA form, then specifically authorizing sensor data gathering — and disclosure of the duration of the study. The Heart and Movement Study is expected to take five years, while the Hearing Study runs for two years with the prospect of a two-year extension, and the Women’s Health Study “may last for decades.” Apple pledges that the data will not be sold and that users will have control over the types of data they’re sharing.