And anthills and spider dens are dungeon-like areas you can explore. But you’ll need to fight in these areas, and the tech tree enables you to make better weapons and armor as you fill it out.

It’s not Ark or Rust

While Grounded is a survival game, it’s not competing with the likes of Ark: Survival Evolved or Citadel: Forged With Fire (which just came out on consoles last week).

“It’s a new genre,” Brennecke said. “One thing that’s important to us is that we’re trying to make a game that you can tell is very approachable. Not only is the setting approachable … we’re paying attention to that first-day experience so that players can get comfortable with the mechanics. Most survival games are very punishing and can smack you over the head. We’re trying to make sure that everyone that plays the game can get up and going with the game mechanics before it becomes more challenging.” 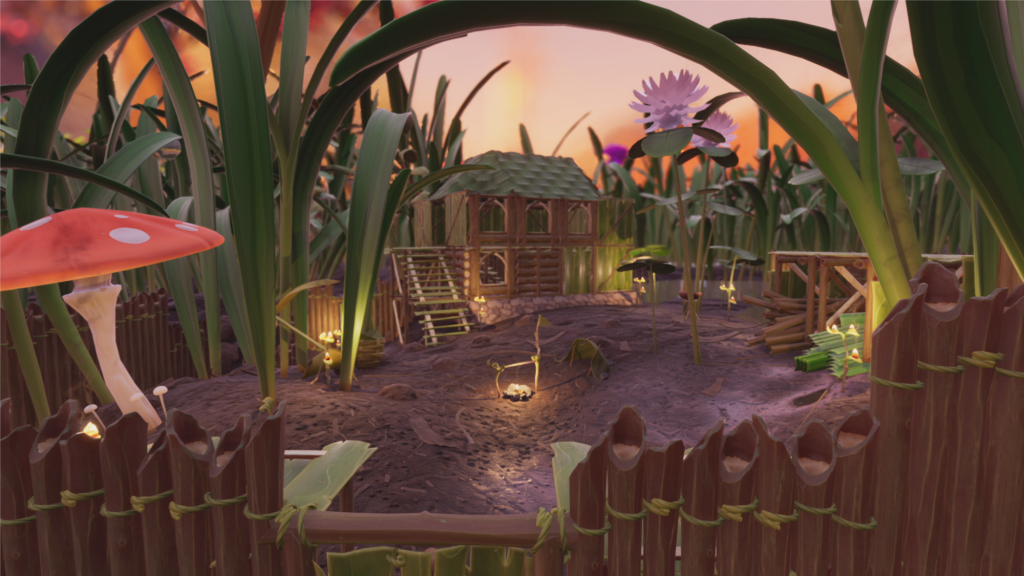 Brennecke also said it’ll also have those “nitty-gritty” mechanics Obsidian’s known for in its games.

One of the big differences is that Grounded has a story. Most survival games have a rudimentary narrative, but Obsidian is doing something different here.

“I’ve spent my entire career here at Obsidian. We do things a certain way here. We like to add to the survival game and say, ‘What could we add to that,'” Brennecke said. “Not only are we adding a rich storyline to go through. We have memorable characters that we all know and love that we like to have in our games. We also like to have choice and consequence in our games

“One thing that we’re looking at is how the player can affect the story, how they can affect how they play through the game. We also have a light sprinkling of RPG things. We have tiers of armor. We have armor sets.”

Grounded doesn’t have traditional dialogue trees, like you’d find in Pillars of Eternity or Outer Worlds. “But we do want the player to affect the storyline by playing the game,” he said.

Grounded is unlike anything else in Obsidian’s catalog. I asked Brennecke how this came about. He mentioned a brainstorming session with his colleague on Pillars of Eternity II, lead designer Bobby Null.

They talked about being in one situation or another until one of them brought up shrinking.

“What if we’re shrunk down and had to survive in basically a backyard. And the breakaway said there was something here,” Brennecke said. “We started riffing back-and-forth, ideas you could find in this world. And immediately, as game designers, we said there’s a lot of stuff here to sink our teeth into, to flex our creative muscles. We shared that idea with a lot of people at the studio and studio leadership and they said, wow, that’s a lot of cool stuff.”

Above: OK, who wouldn’t buy into this idea?

And it was something just about everybody could buy into — he noted being shrunk down to the size of insects and exploring a backyard is a fantasy in which everyone could have a space and bring an idea to because it’s relatable. “We can all put ourselves into that position,” Brennecke said.

I asked if that’s because we all can feel small, dealing with the big problems in today’s world.

“I like that a lot. That’s a cool, cool way to look at the premise of the game,” he said.

Brennecke said they started working on Grounded before the Microsoft acquisition, after Pillars of Eternity II wrapped up (that game came out May 8, 2018). They put a small team to work on it after getting approval from Obsidian boss Feargus Urquhart. They got a prototype running, got some art, and everyone thought it was a good idea.

And Microsoft bought into it as well.

“They’ve been very supportive,” he said. “They checked out the game, said keep working on it, it looks really cool. They were pleasantly surprised.”

I asked if Grounded would’ve been something that Obsidian took to crowdfunding if Microsoft hadn’t acquired the studio, and a representative said this over email. “We already wanted to bring [Grounded] to fans in some form of Early Access, as the community is one of our major focus points and it’s important to us that they be a part of the development process,” the rep said.

The comparisons to the Honey, I Shrank the Kids films are inevitable. But I wondered if Obsidia had thought about asking Rick Moranis to do a voice for Grounded.

“I don’t know if I can answer that,” Brennecke said. “That would be a fun thing.”

But even if the comparisons are inevitable, Brennecke wants Grounded to stand on its own turf.

“There’s a lot of stuff in there, but we’re trying to tell a story with our own style and flair,” he said.

Even if that flair includes roasting aphids on an open fire.