I’m about to co-write another video game history book: volume 2 of The Ultimate History of Video Games. My friend Steven Kent wrote the first volume of this book and published it in 2001. It covered the first 25 years or so of the history of video games. About a decade ago, he stopped writing day-to-day stories on the game industry and began writing science fiction novels.

But his first book did well and so his publisher asked him to do a new version, covering the last 20 years of history. There should be demand for this, since all of us remember our encounters with video games so fondly. The retro craze is in full gear. And Kent’s original book is taught in a lot of college video game programs.

Since I’ve been covering games as my daily beat for 23 years, Kent asked me to co-write it with him. One of the great privileges I have had in my job as a journalist is to witness so much history as it has been made, by people that I interview on a daily basis. The more I think about it, the more I think it is a daunting challenge and big responsibility. So I’m asking for some suggestions and help in this column. Time is short.

History is pretty unforgiving. It’s so easy to forget a lot of what happens every day. I have written an average of 29.7 stories a week for the past 12 years at VentureBeat. We’re like the daily diary of the video game dream. Most of those are about games. But sadly, after a day or so, most of those stories are forgettable. Between Steven and I, we’ll get about 150,000 words to write in our book. We’ll split it into 24 chapters, each doing a dozen. I’ll focus on the last 10 years, and he’ll do the 10 years before that.

Should be easy, right? I only have to do 75,000 words. And heck, I do that every couple of months or so. Actually, that’s the wrong way to think about it. It means that each chapter I write is no more than 6,250 words. And these chapters are going to be broad and sweeping. For instance, I might have one chapter to write about esports. One chapter on virtual reality. One chapter on mobile games. And one chapter on all of the controversies around gaming.

You get the picture. It’s a massive task of condensing what we see as important on a daily basis and reframing what is important when you look at it through the lens of a couple of decades. Kent and I have to weed it all out. We have to show no mercy when it comes to tossing out the details that people just aren’t going to care about when they think of all of the great things or bad things that have happened in gaming.

I should not be so intimidated. I’ve written two books before this, both on video games. One was on the making of the original Xbox (Opening the Xbox, 2002), and the second was on the making of the Xbox 360 (The Xbox 360 Uncloaked, 2006). But both of those books could be condensed into a couple of chapters, written by Kent. Yes, he’s going to shred most of my words. But I also get to do that to Blake Harris, who wrote The History of the Future, about the rebirth of VR. I get to condense his book and more into one chapter.

I’ve written perhaps 572 DeanBeat columns over the last 11 years (I didn’t go back and check this). If I printed them out and stapled them all together, they would probably be about 572,000 words. Enough for five books, right? Well, not exactly. The perspective I get from thinking about something for a week isn’t nearly what I would need to pull together the perspective necessary for a history book. I hope that readers of GamesBeat and VentureBeat will benefit from this book too. I figure it’s got to sharpen my thinking and my sources. In my day-to-day interviews for GamesBeat, I want to be talking to the people who are making history. 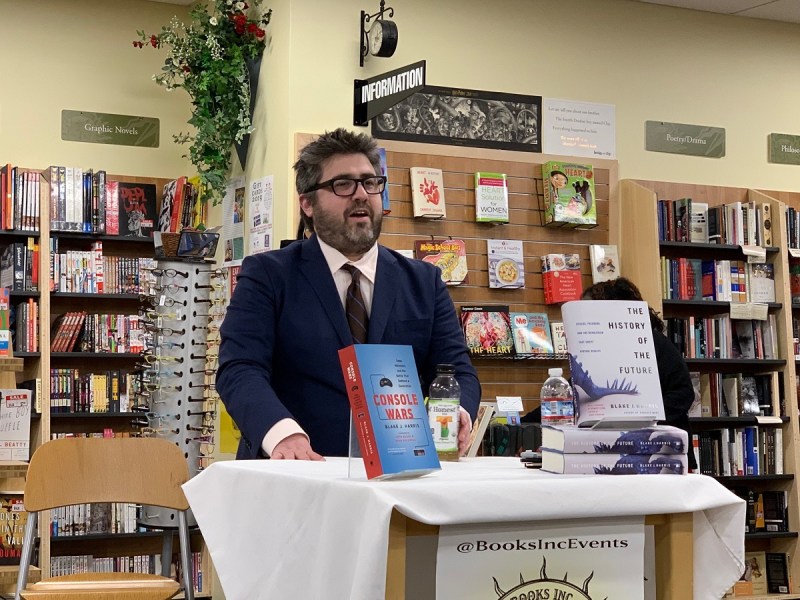 Above: Blake Harris is author of Console Wars and The History of the Future.

So I’m asking for some advice. You’re part of the GamesBeat community. And if you think you’ve been part of some video game history, or you think someone you know about should be part of video game history, let me know. You can contact me at my email dean at venturebeat dot com. Or you can contact me via Facebook or Twitter (Deantak). Before I start getting knee-deep in these facts, it would be nice to know what other people think — particularly the leaders themselves — about what is important, and what isn’t. But it would be good to remember that facts are facts, and that “both sides” shouldn’t always carry equal weight in a historical argument.

After all, if we all collectively wrote our own views of history, the stories would all come out different. If I’ve learned one thing after more than 30 years of journalism, it is that different perspectives matter. People can see things in a different way, and as we’ve seen with our divided politics of today, people can witness the same event and interpret it in totally different ways. Indeed, historians are often accused of being biased and interpreting the facts as they choose, based on their own preconceptions. I’ve noticed the forces shaping gaming, with a conservative force trying to pull it back from the mass market to a smaller circle of hardcore gamers, and a more liberal force aiming to make gaming accessible to everybody in the world. Who controls the soul of gaming?

But I’m serious. How do you think I should approach this? Which was the most important game console in history? What role did EA spouse play when it comes to crunch? How should we interpret the meaning of Gamergate? Will virtual reality be remembered as a dud? Is esports going to matter in the long run? How should we look back on people like Palmer Luckey, John Carmack, or Zoe Quinn. Shall we write more about the Japanese or the Finns? And when we make predictions at the end of the book, we’ll contemplate the future of games.

So speak up. Let me know your thoughts. Now’s your chance. Don’t be left out of history.