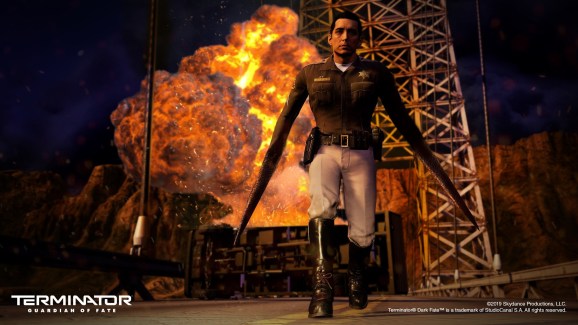 Restaurant and arcade chain Dave & Buster’s launched another new VR experience after the success of their previous VR attractions. The new VR title is called Terminator: Guardian of Fate – a tie-in with the new Terminator: Dark Fate movie.

The Terminator VR experience is the fifth VR game available at Dave & Buster’s locations. They previously offered experiences that tie-in with Star Trek, Men in Black and Jurassic World franchises as well, the latter of which was their biggest launch ever.

In Terminator: Guardian of Fate, “players must outrun and outwit the Terminator to ensure the target and her work escape safely. Sarah Connor guides players every step of the way as they fight through a zombie-style shootout with the Terminator who will stop at nothing to attack the players’ vehicle while causing tons of destruction.” You can watch a very short trailer for the experience above (with an authentic 90s TV commercial voice-over to boot).

Sarah Connor is voiced by the character’s original actress, Linda Hamilton. The experience is available across the United States already, playable at 130 Dave & Buster’s locations. The experience supports up to four players, and will be offered in addition to the existing VR experiences such as Men In Black: International and Star Trek: Dark Remnant.

According to developers VRStudios, Terminator: Guardian of Fate will also soon be expanded with an additional chapter, which will add multiple endings and ensure players “never have the same experience twice.”