Microsoft’s accessory for the Xbox One game console debuted in the fall of 2018. The controller enables people who don’t have thumbs, fingers, limbs, or good motor control to plug in alternatives that they can control. And that enables them to play games on the Xbox One consoles that they wouldn’t otherwise be able to play.

The plugs are where the Logitech G kit comes in. The company has bundled many of the attachable peripherals in a $100 kit that makes the devices much more reliable and easy to plug into the base controller.

The kit is a collection of buttons and triggers designed for gamers with accessibility needs. A companion piece, the Logitech G Adaptive Gaming Kit lets gamers play the way that’s most suitable for them by providing a set of controls that are easily configured to a wide variety of use cases.

It features a large assortment of buttons and triggers with gaming-grade components for performance and durability, manufactured to the highest standard, at a price point that is far more accessible than what is on the market today.

“We believe play is super important. When you’re a child, you play a lot and as you grow up and life kicks in, you play less and less and less.  This is one of the things that we stand for. Life is just more fun when you play. And everyone should be able to play,” said Ujesh Desai, vice president and general manager of Logitech Gaming, in an interview with GamesBeat.

He said Logitech G is committed to inclusivity and diversity in gaming.

“We worked with them a bit on that to help them develop that in terms of supporting them with different peripherals, and joysticks and things that can plug into that product,” Desai said. “Before they launched, they invited me personally and a couple of us to see it. When I went up there, I just realized that there was so much more that we could do in this space, and frankly, that we should be doing in this space. And that’s what led us over the last 12 months to do more.”

Logitech G worked with the Microsoft Inclusive Tech Lab and leading accessibility groups including, The AbleGamers Charity, Abilities Research Center at Mount Sinai, and SpecialEffect, to develop the Logitech G Adaptive Gaming Kit to ensure it met the needs of the community.

“We believe that technology has the ability to empower all of us,” said Phil Spencer, executive vice president of gaming at Microsoft, in a statement. “With the addition of Logitech G’s Adaptive Gaming Kit, together we are able to push the boundaries of what technology can do in a concerted effort to be inclusive of everyone around the world.” 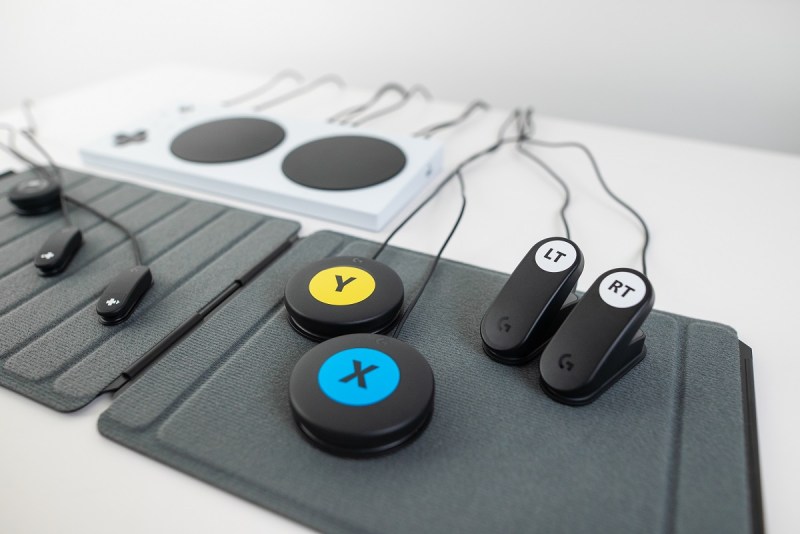 “The goal of AbleGamers is to find a way for people with varying abilities to play video games,” said Steve Spohn, chief operations officer at AbleGamers, in a statement. “Everyone’s needs are different, and the Logitech G Adaptive Gaming Kit delivers a wide range of configuration options to make gaming a possibility for all. We appreciated the opportunity to work closely with Logitech G on the design of this kit and look forward to continuing our partnership in the future.”

The Xbox Adaptive Controller has 19 different jacks in the back where you can plug in peripherals. The Logitech kit has accessories for about a dozen of the jacks.

“We worked with various charities going into people’s homes that had accessibility needs,” Desai said. “What we saw was a lot of people doing some amazing things to try to, for lack of existing products to suit them, to cope with what they had. We are supplying products like the buttons, triggers, and switches.”

The kit is expected to be available on LogitechG.com and through select Microsoft retail stores in November 2019 for $100. In order to use the Logitech G Adaptive Gaming Kit, you must have an Xbox One console and the Xbox Adaptive Controller.

The kit will be a lot cheaper than buying all of the accessories separately. Many of them were not in high-volume production, and so the quality and quantities available were low.

“They can now buy these things in a bundle, pull out what they need, and it’s still way more cost-effective than what they are buying today,” Desai said.