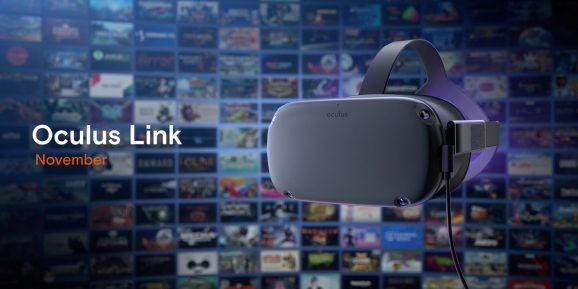 Absent official sales numbers, there are still plenty of reasons to believe that the standalone Oculus Quest VR headset has been a qualified hit for Facebook — likely more so than the Rift S headset that was launched for PCs. Today, Facebook is giving Quest a major boost with the release of Oculus Link beta software and cable specs that will widen its appeal, enabling VR fans to use a single headset for both PC and standalone apps.

There’s good news for current Quest users: Link won’t be an expensive add-on. First, the company says that “most high-quality USB 3 cables” will work to transfer data and power between the PC and headset — though not the USB 2-based USB-C cable that currently comes in Quest boxes. Oculus still plans to release its own 16-foot fiber-optic cable in select regions “later this year,” but says that a sub-$15 Anker cable delivers “good results” for those who want to try the experience during the beta period.

Second, the free Link beta software is becoming available now. The Quest needs to be running version 11.00 or higher firmware, while the Oculus PC app needs to be 1.44 or higher. With both of those releases installed, and the Quest connected to the PC via USB 3, you’ll be able to gain access to an Oculus Link-specific “remote rendering feature” by selecting “Enable Oculus Link (beta).”

Facebook’s goal is to get the Oculus Link hardware requirements to match those of the Oculus Rift and Rift S during the beta period. GPU aside, the Link’s recommended PC specs are the same as those for the Rift S: an Intel i5-4590, AMD Ryzen 5 1500X, or faster CPU, 8GB of RAM, Windows 10, and a single USB 3.0 port.

Oculus Link was originally announced at Oculus Connect 6 in September with a promised November release, though the specific timing and compatibility details weren’t certain. The company announced the cabled solution following third-party experiments with wireless PC streaming to the Quest, which were largely successful but didn’t preserve full visual fidelity — a good but not great level of performance that Oculus team members wanted to surpass in an officially sanctioned solution.