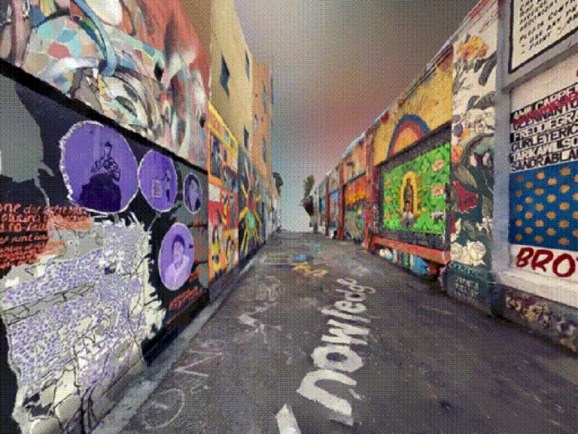 Ubiquity6 is launching Display.land, an augmented reality app that lets people capture the world around them, edit and mash it up, and then share it with other people.

With this merger of physical and digital worlds, reality becomes a canvas for creative people to decorate with virtual imagery. The app is available on iOS and Android, and it uses the graphics processing power of smartphones and photogrammetry, or precisely interpreting and stitching together photos to get a sense of space, to do its work. It also taps Ubiquity6’s cloud servers.

With Display.land, your camera becomes a scanner for the world. You can move your camera around a space, and Ubiquity6’s computer vision technology reconstructs it in digital form. It then becomes a “digital space” that you can decorate in real time with emojis, decals, and paint brushes. You can make that space your own, and then share it via a button on your smartphone.

“People from all around the world are using this for things we didn’t expect,” said Anjney Midha, CEO of Ubiquity6, in an interview with VentureBeat. “Anybody with a smartphone can convert a real-world location into a shared digital space, precise to a few centimeters. You can then create 3D interactive experiences in those spaces, almost like using a game engine, but with no need to become a professional game developer. And you can share it with whoever you like. This is really just the beginning of what we can do.”

Ubiquity6’s software taps the smartphone’s camera, navigation, and motion-sensing data. You can re-create a real-world space and then interact with it in digital form. You can make things such as architectural annotations, spatial photo albums, and animated scenes that can be instantly viewed via a web browser across mobile, desktop, and VR devices with a simple URL.

Over time, the company plans to introduce more and more powerful creation tools. “We married the best parts of the game engine stack — the multiplayer and photogrammetry — that are usually only available to these high-end professionals,” Midha said. “People just started capturing the spaces they care about, sharing it with their friends and family in a way that they haven’t been able to do so far. We have turned everyday users into game level creators in early access. And now we’re rolling out that capability to anyone around the world with a regular smartphone.”

One of the cool features is that, once you create an AR space in the real world, you can then share it with someone else.

I saw a demo of the tech in action at the company’s headquarters in San Francisco. The Ubiquity6 team had used a smartphone camera and computer vision software to capture their company lobby. Then they inserted an animated basketball hoop and animated basketballs.

I aimed my ball by tilting the camera and then pressed a button to shoot. The basketball launched at the hoop, and I had to keep adjusting my aim until I could score some baskets under a timer. Meanwhile, Midha was using another smartphone and sharing the same space. Simply by sharing a URL with someone else, your friend can enter the same space as you. Midha showed this off by launching basketballs at the same hoop.

Midha showed me imagery that people had captured from around the world. One person captured about half of the fabled Coliseum in Rome. The person shared it, and another said they would capture the other half on another trip. That shows that someone can take a file and share it with someone else, and then Ubiquity6 can stitch those realities together. People are free to mash-up different creations, share them, and get credited for the sharing. You or your friends can annotate the space with 3D objects, notes, photos, and links.

Midha also attached a virtual bunny to himself, and the bunny followed him around as he walked about the room.

“What we’ve done is basically overlay a shared persistent world on top of the real world, using just a phone, but you’re seeing it work on any platform,” Midha said.

I also did a scan of my living room. I just rotated around and around while the app collected a point cloud of all of the objects in the room. When I had done the minimum amount of scanning, the app told me so, and I sent it off for processing. I could have kept scanning until I collected the “max” amount of data. When I sent it off, Ubiquity6’s software compressed the data so it wouldn’t be too much to send over the network or via Wi-Fi.

The processing took a while, but once it was ready, I could view it in real time. The finished image was a 3D rendering of my living room. Some of the areas were blank, but if I had done the max amount of data collection, those areas would have filled out. If I hit publish, I could have shared it publicly with the community.

“People from all around the world are using this for things we didn’t expect,” said Midha. “Anybody with a smartphone can convert a real-world location into a shared digital space, precise to a few centimeters. You can then create 3D interactive experiences in those spaces, almost like using a game engine, but with no need to become a professional game developer. And you can share it with whoever you like.”

The start of a new community

Above: Here’s a scanned real-world scene in Display.land.

Since launching in beta, Midha said the Display.land community map has grown as users have shared thousands of real-world spaces in over 50 countries, from graffiti-filled streets in Barcelona and coffee shops in Tokyo to secret gardens in London and underground bunkers in Sausalito.

Every day, the people of Display.land learn new things about each others’ cultures from around the globe by sharing the spaces they love, he said.

Ubiquity6’s technological breakthroughs have previously stumped industry incumbents, including the ability to have a massively shared augmented reality experience that persists through time, Midha said.

Created by Ubiquity6’s team with alumni from Stanford, Twitter, Zynga, and Unity among others, the Ubiquity6 Reality Engine enables cross-platform, massively shared, persistent experiences across AR and VR from any device.

“People love hanging out, interacting and creating together in shared spaces like arcades, playgrounds, and studios,” said Bing Gordon, partner at Kleiner Perkins, in a statement. “The super-promise of the Internet is to bring that quality of social connection online. Display.land makes it easier than ever before to recreate a space you love, share it with friends and build it into whatever you want together. It’s a mix of persistent world-building games with real friends and real-world spaces.” 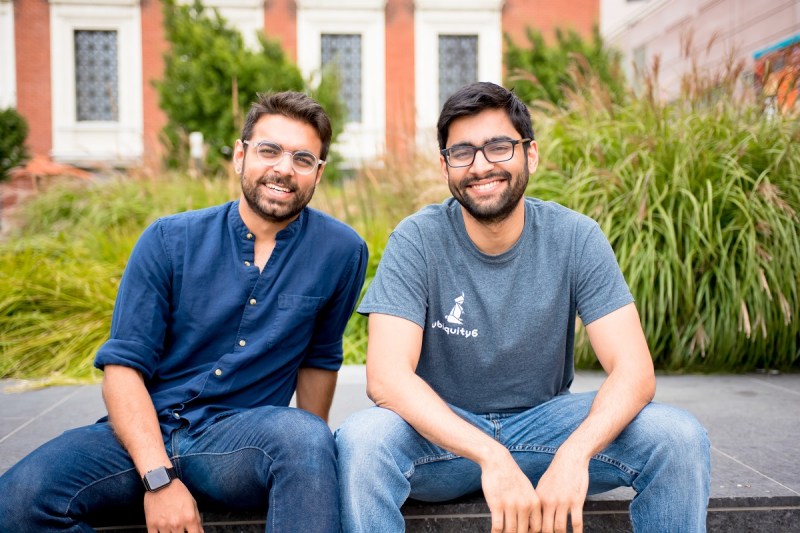 Above: Anjney Midha (left) and Ankit Kumar of Ubiquity6.

Ubiquity6 was founded in July 2017 by Midha and Ankit Kumar.

“We met in college as undergrads at Stanford, and we took slightly different paths for a couple of years,” Midha said.

Midha worked as a venture capitalist at Kleiner Perkins with Gordon, one of the cofounders at EA. Based on what he saw, Midha believed it would take time before some of the best hopes of computer vision, AR, and AI would come to fruition. But Kumar went through several startups and believed the graphics processing units (GPUs) and navigation tech would progress quickly.

“He believed this amazing graphics potential that has been largely in the gaming world for servers was starting to become more and more accessible to everyday consumers,” Midha said. “He believed that there was a way to get these phones to understand the world precisely enough to a few centimeters, so that now you and I can look through the camera and see each other as precisely positioned as we are on reality.”

They started working on a side project so they could prove each other wrong. It turned out it was harder to do than Kumar expected, but still possible despite what Midha believed. Once they got a prototype, they started a new company.

“We put up a hoop and were able to see each other throwing basketballs at it in real time,” Midha said. “And when we unlocked that, we realized it’s a super meaningful experience for two people to now look to the cameras and actually play with each other as opposed to being looking down at their phones and playing in their own worlds.”

They went on to do an exhibit at a museum where 150 people could paint the ceiling with virtual colors at the same time, in the same shared space, where they could all see what the others were doing.

“That was a first of its kind experience, with that many concurrent, networked players in one space,” Midha said. “The average session time was 45 minutes, and it included 65-year-old people with no interest in gaming.”

Ubiquity6 has raised $37.5 million to date. Investors include Benchmark, Index Ventures, First Round Capital, Kleiner Perkins, and Gradient Ventures. The company has 65 employees. Ubiquity6’s Display.land is free, but the company hopes to charge for the use of high-end tools over time.

“Our goal was to allow people to turn any physical space into this kind of digital space, then you can unlock the kind of shared social interaction you and I were having, which is the guy you usually get only in the physical world in a playground, or in a studio when you’re creating, in a sandbox environment,” Midha said. “Now kids have the sandbox environments in the real world. Adults have them in the virtual world by playing massively multiplayer online (MMO) games. But there’s no one who has been able to blend that behavior.”