The strategic investment from key players in games and mobile showcases the power and potential of Bunch’s app to set the industry standard for social networking and video chat with friends in mobile games. It will help the company execute on its vision for being akin to the Xbox Live of mobile games, said Selcuk Atli, CEO of Bunch, in an interview with GamesBeat.

“Retention is where it helps, as that is what game makers need to improve, so that players come back more often and eventually spend more money,“ Atli said.

The company will use the funding to accelerate product development and expand partnerships and integrations.

Alongside the new funding, Bunch has expanded its leadership team. Jonas Christiansen, who previously held senior product design roles at Facebook and Google, has joined as head of product. Greg Essig is also on board as head of business development, bringing his history of building partnerships at mobile games streaming service, Mobcrush, and on the App Store Management team responsible for the Games category at Apple.

“Most new players to League of Legends join the community through their friends. That’s why social is a huge part of what we do here at Riot,” said Brendan Mulligan, senior corporate development manager at Riot Games, in a statement. “As we begin to offer new multiplayer titles, including mobile games, reducing friction to play together is even more important. We love that Bunch is like a LAN party in your pocket, and we think their team and execution are best in class.”

The Bunch app creates a “frictionless experience” to party up with friends on video chat; and jump together into the same game session. Bunch’s long term vision is to help people spend more face to face time together, playing their favorite games — anytime, anywhere.

“At Supercell, we believe that the social experience has a crucial role in making games that players keep playing for years,” said Jaakko Harlas, head of developer relations and strategic finance at Supercell, in a statement. ”We are constantly looking for ways to make playing our games with friends as easy and enjoyable as possible. Bunch is the most thoughtful experience we’ve seen that tackles this problem – and we are looking forward to working together closely.” 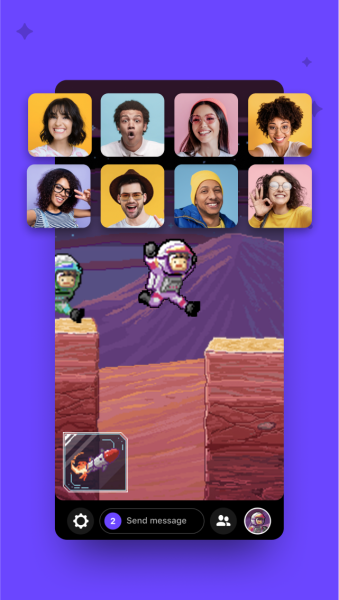 Players can download Bunch today by visiting the App Store or Google Play. Rival’s include Discord and Microsoft’s Xbox Live itself.

Atli said that players can join each other in the exact same game session. They can do so by opening the Bunch app, partying up on the app, and then starting their mobile games. Through deep linking technology, players can find each other and join the same game.

“You can do voice chat while the game is being played,“ Atli said. “On Android, you can turn on or off video. We like hosting frictionless social experiences.“

“We see a younger generation of gamer who cares about the frictionless experience of jumping with friends, directly into experience,“ Atli said.

The company has 15 employees in New York and Toronto.