Two of the people who helped ensure games such as Dishonored are so memorable are ready to go at it again. Arkane Studios cofounder and former creative director Raphaël Colantonio and ex-executive producer Julien Roby are launching WolfEye Studios, a new dev house. As far as where’s it’s based, well, they’re used the “distributed” model for game development. So the team is in Australia, Texas, and anywhere else they live and work.

“I think to back in the day and how Arkane was born out of wanting to make a game, not to make money” Colantonio said. “And I think [our desire to form WolfEye] is the same desire to stay creative and to bring something to gamers that we believe that we think is exciting.”

“The reason I got into making games was to make specific types of games I like to play,” Roby said. “I felt if I got back into games, it would be to do something I would want to do, not just for the sake of it. I’m excited to show [our project] to people.”

WolfEye isn’t saying much about its new project, what game engine it’s using (and whether they’re using an off-the-shelf option or one of their own), and such. The main art for this story is a teaser for the game, and WolfEye plans to announce at at The Game Awards on December 12 (it airs from 5:30 p.m. to 7:30 p.m. on all major digital, gaming, and social platforms, along with some movie theaters).

Roby will be WolfEye’s executive producer. He spent more than a decade at Arkane, serving in a similar role for Dishonored, a leader producer/game designer for Dark Messiah, and a designer/associate producer for Arx Fatalis. After leaving Arkane, Roby joined 2K’s Hanger 13 to work as a senior producer for Mafia III and later as an executive producer for Borderlands: The Pre-Sequel at 2K Australia, overseeing co-development with Gearbox Software.

The studio has investors, but WolfEye isn’t ready to reveal them yet.

Path of the wolf

Colantonio left Arkane in 2017 after 18 years. “I needed to redefine myself. I had a bit of identity confusion: How much am I Arkane? How much am I defined by Arkane?” Colantonio said over a video call. After leaving Arkane, he traveled, played music, visited friends, and enjoyed spending more time with family. He felt this “time of rebuilding was very necessary” to discover what he wanted from his future, from life and work. And after time off, the ideas started to flow, leading to talking with Roby and forming WolfEye.

Colantonio and Roby have worked together since Roby joined Arkane as an intern in 2001, working on Arx Fatalis. Back then, the company had fewer than 10 people. Over the years, they’ve formed a bond.

“We complement each other,” Colantonio said. “Both of use are problem-solvers. He’s better skilled, frankly, at organizing things, seeing things from a distance. And I went toward creative control of the vision. We’re similar, it’s just that [our talents lend us toward] one more being the executive producer and [one] more being the creative director.”

And it’s these skills they hope to tap in managing a team in the Americas, Europe, Asia, and Australia. WolfEye doesn’t have a headquarters or a physical studio. It’s common for indies to do this, as one of the biggest expenses in opening up your own shop is, well, the shop itself. 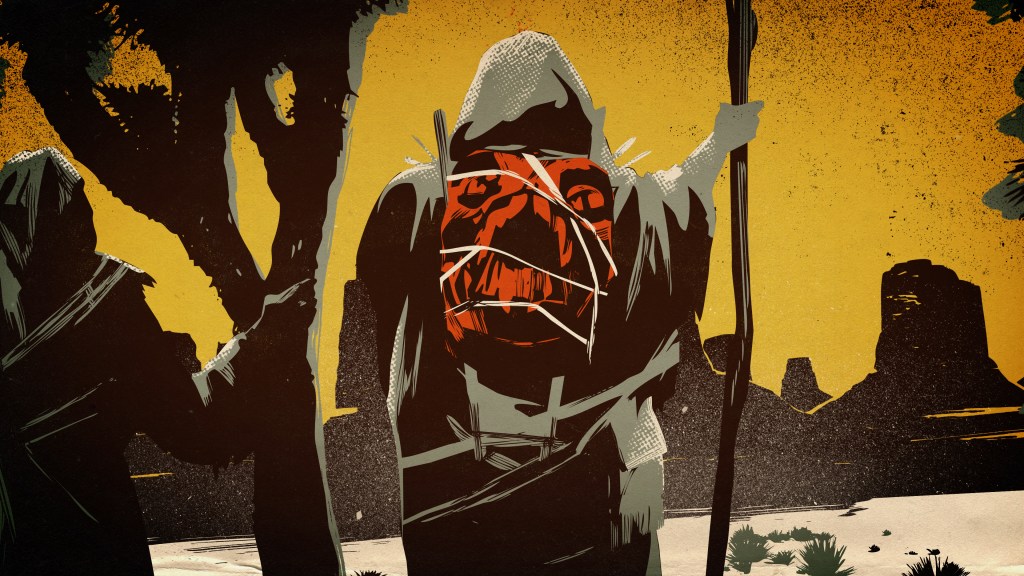 Above: The red demands that your eyes pay attention.

WolfEye isn’t saying much about the game it’s making. The teaser image has a person holding a staff with what appears to be a red face or skull on their back. This individual stands next to another near what could be a tree, staring out at a desert landscape. They wear cloaks. To me, it looks a little Mad Max-ish, in the sense that the world has ended. Whatever it is, the image is striking.

“It’s your impression,” Colantonio said. “We like interesting worlds and interesting art direction. … We have a very artistic approach to our passion, which is making games, and hopefully the image conveys that.”

The dateline for their press release is “The Beyond,” bolded and in all caps. I asked if this hinted at anything, but all I got was a “You’re gonna have to wait to find out” from Colantonio.

What I do know is that Arx Fatalis is a cult-classic action-RPG, an underrated game that didn’t sell well but has a fine reputation. Dishonored is a fantastic stealth-action series, one of the best from the past decade. And Prey is a fascinating game, one with a tortured history to match how it can torture — or tantalize — players. Heck, even Dark Messiah of Might and Magic has its charm (especially with its melee combat — few games have nailed kicking things as well as it had). Whatever WolfEye is making, it should be worth paying attention to.