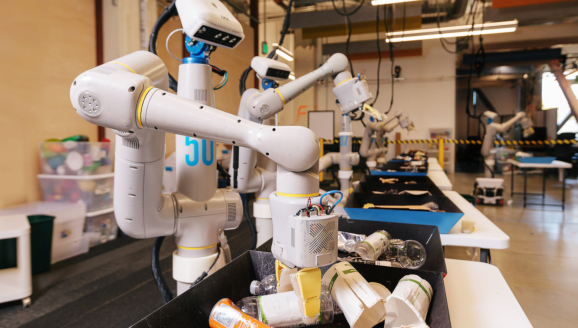 Alphabet’s X team for moonshot projects has been using robots to sort compost, recycling, and landfill waste in initial use at X company offices in recent months. The robots on wheels can drive to trash sites in the Mountain View, California office and sort recycling and trash using a combination of computer vision and a robotic arms.

The news today came as Alphabet unveiled the Everyday Robot Project, a moonshot to make robots augment human activity in the physical world in environments like the home or office the same way computers do in the virtual world. The Everyday Robot Project has been underway for years, as many members of the team that collaborates with Google AI joined Alphabet in 2015 or 2016.

“During the last few months, our robots have sorted thousands of pieces of trash and reduced our office’s waste contamination levels from 20% — which is what it is when people put objects in the trays — to less than 5%,” Alphabet X robotics project lead Hans Peter Brondmo said in a post today. “It will be years before the helpful robots we imagine are here, but we’re looking forward to sharing more robot adventures along the way.”

A number of machine learning techniques were used to create the system, including the use of synthetic data from virtual environments with reinforcement learning.

Companies like Google, Nvidia, and Facebook have gone deeper into robotics challenges in the past year as a way to create hardware that works in the world but also to create complex multimodal AI systems.