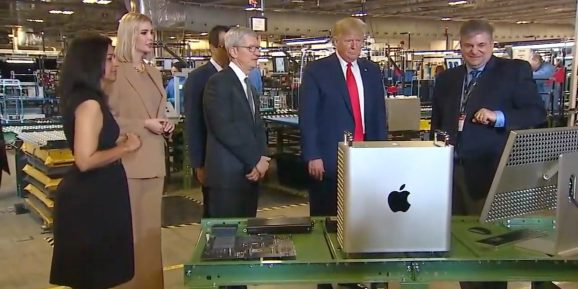 Every major company knows that there are pros and cons to dealing with politicians, namely the prospect of favorable treatment offset by the risks of implication in future political scandals. Under former CEO Steve Jobs, Apple stayed out of politics, but his successor Tim Cook has embraced not only Apple-wide political positions, but also specific politicians — most notably U.S. President Donald Trump, who is currently facing impeachment over allegations of bribery and related offenses.

Up until yesterday, Apple might have seen more upside than downside in its relationship with Trump. It has been selectively spared the full brunt of tariffs on China that most economists and politicians agree have been damaging to the U.S. economy, as well as individual companies and consumers. Apple has also been the beneficiary of favorable tweets — for whatever they’re worth — from both Trump and his inner circle, largely avoiding the president’s well-known social media flaming and shaming efforts.

Over the past 24 hours, however, the optics of the Apple-Trump relationship changed in ways that should embarrass Cook into publicly distancing both himself and Apple from the president. As impeachment proceedings continued in Washington, Trump flew in and out of Texas solely to attend a media event arranged by Apple, where he was presented with a metal plaque commemorating the Mac Pro’s “assembled in USA” status, a moment he filmed and shared in reelection campaign advertising. As cameras flashed, Trump falsely claimed that the factory — which has been making Mac Pros for years — wouldn’t have opened without his leadership, then spent the balance of the event attacking both Congress and the U.S. media, which Apple represents and distributes through both Apple News and Apple News+, all as Cook stood by and said nothing.

Tim Cook’s decision to continue embracing Trump through everything — the early public dissolution of a business advisory council over Administration policies, continued attacks on both China and U.S. immigrants, and now the ignominious spectacle of impeachment hearings — made this moment possible. Without Apple’s participation, there would have been no Mac Pro factory backdrop for upbeat reelection ads, nor any apparent embrace of this president by mainstream tech leaders, who have largely shunned him. Even Mark Zuckerberg, someone who needs as much government support as he can get, downplayed his recent invitation to dine with Trump at the White House.

During my visit yesterday to Austin, Texas, for the startup of the new Mac Pro, & the discussion of a new one $billion campus, also in Texas, I asked Tim Cook to see if he could get Apple involved in building 5G in the U.S. They have it all – Money, Technology, Vision & Cook!l

Trump apparently isn’t done milking the Apple relationship for PR value, either. This morning, he claimed to have pitched Tim Cook on getting “Apple involved in building 5G in the U.S.,” whatever that means. (Apple is already developing 5G phones in conjunction with Qualcomm and 5G modems after an acquisition from Intel, so it’s not as if the company wasn’t already “building 5G in the U.S.” before yesterday.) We reached out to Apple for confirmation and clarification on the claim, but both the company and Cook have thus far stayed silent in the face of Trump’s other statements.

It’s worth underscoring that this is the polar opposite of what Cook’s supposed hero, Martin Luther King, Jr., would have done. Apple has repeatedly celebrated King’s birthday on its homepage, and Cook’s Twitter bio prominently features a King quote, suggesting that he holds the slain civil rights leader in particular esteem. But despite those and other public statements from Cook, his actions as Apple’s CEO — including his continued engagement as Trump has done incalculable damage to minorities, such as the historically shameful separating and caging of immigrant children — have empowered Trump to advance both policies and his reelection campaign with the apparent support of American industry, including its largest public company.

The Martin Luther King, Jr. quote that’s most relevant here has often been paraphrased as, “Our lives begin to end the day we become silent about things that matter.” It’s a sentiment that I took to heart decades ago, inspiring me — and countless others — to stand up and stay honest in the face of dishonesty and injustice. For reference, the original King quote is believed to be:

Yesterday, as Cook stood silent while Trump lied about his company, the media, and those who are seeking justice for his actions as president, he went from being Trump’s passive enabler to an active participant in his reelection campaign. Apple looks worse for being complicit in a non-stop stream of distortions and lies, to say nothing of increasing the perception of American government as a brazenly pay-to-play partner for industry. Regardless of whether Apple has benefited from the Cook-Trump relationship, it’s time for Cook to speak truth to power, before his involvement with this president leaves a permanent stain on Apple’s legacy.