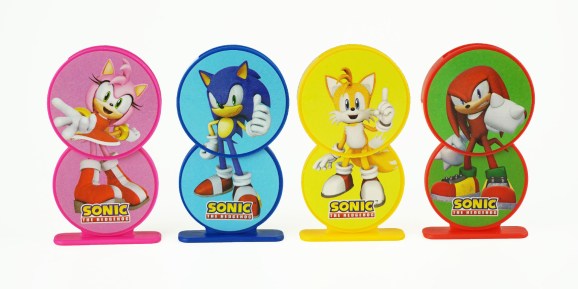 Gotta go fast … to Arby’s. The fast food chain has announced that will give away Sonic the Hedgehog toys with its kids meals in the U.S. from December 1 to February 29.

These are toys made of discs, as you can see above, and they feature Sonic and his friends like Tails, Amy and Knuckles, along with villains like Dr. Eggman and Shadow (OK, I think he may be more of situational ally now, but that Sonic lore has gotten confusing).

This promotion will run through the release date of the Sonic the Hedgehog movie, which comes out on February 14. These toys, however, are based on the Sonic designs from the modern games and not his look from the film.

Arby’s has been doing a lot of work on social media in an attempt to appeal to gamers, often showcasing gaming-themed art made entirely from packaging cardboard and other items from the restaurant.

Here’s to the best glow up of 2019 #SonicMovie pic.twitter.com/8immXT0FeS

“We love working with partners who get us, and Arby’s does,” said Ivo Gerscovich, chief brand officer for Sonic the Hedgehog and senior vice president of Sega of America, in a press release sent to GamesBeat. I’m tempted to end the quote there, but there’s more. “They’ve done a great job with the Game On Kids Meal to integrate content and encourage collectability. We look forward to delighting fans and new audiences via this program as Sonic races into a landmark year ahead!”