As you’ve probably noticed, the name of Valve’s new Half-Life VR game, announced on Monday, is not Half-Life 3. It’s not even Half-Life 2: Episode 3. It’s Half-Life: Alyx.

We all know that Gordon Freeman is the primary hero of the Half-Life series. Sporting his iconic HEV suit with crowbar in hand, players have spent countless hours hacking away at headcrabs and bounding through the alien world of Xen as the silent protagonist. But judging by the name, in this new game we’ll be slipping out of Gordon’s suit and into the shoes of Alyx Vance.

It could be that we’re another character and Alyx features heavily, but we’ll likely find out for sure later this week.

So, if you’re not down on your Half-Life lore, let’s give you a quick rundown of exactly who Alyx is. Please note there will be spoilers for the entire Half-Life series in this post.

Alyx made her debut in Half-Life 2. She’s a resistance fighter that joins you in the battle against the Combine, an authoritarian force that rules over people”s lives. While you never play as Alyx, she joins you for much of your journey and basically all of the expansion episodes that followed. She’s the daughter of Eli Vance, a scientist that worked at the Black Mesa Research Facility during the incident portrayed in Half-Life that helps establish the resistance after relocating to the dystopian world of City 17.

Alyx’s mother, Azian, died in the Black Mesa Incident. Despite a tough upbringing, Alyx is a friendly and cheery presence. She’s able to hack Combine technology with a multitool and knows how to handle herself in a fight.

She broke new ground for NPCs

Alyx is considered to be one of the many groundbreaking elements that made Half-Life 2 such a landmark achievement. Valve went to great lengths to create a companion that wouldn’t agitate the player with repetitive dialogue and was authentically emotive in ways we hadn’t seen before. More importantly, though, Alyx was a genuinely useful presence in combat, and didn’t get in the way or need micro-managing like so many AI-driven characters did at the time. With those barriers out of the way, she became one of the first NPCs in a game it was possible to actually care for. Even today you can see remnants of her influence in games like The Last Of Us and God of War. 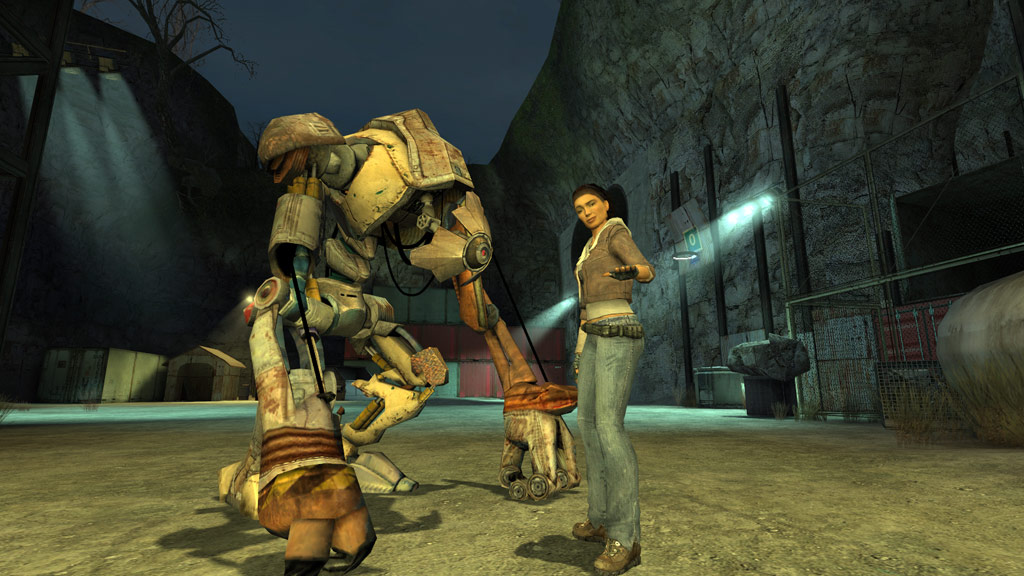 Above: Dog is a robot, and it’s a loyal friend to Alyx.

Alyx isn’t the only companion Gordon adventures with in Half-Life 2; she also brings her pet Dog along for the ride. Note that capitalization isn’t a typo and no, Dog isn’t a dog. It’s a massive four-legged robot Eli built for Alyx as a child. It acts, as you can probably imagine, like a dog, and comes in handy when Gordon and Alyx are in some tight spots. You really grow a connection with Dog over the course of Half-Life 2. Here’s hoping Half-Life: Alyx strengthens that bond even moreso.

The last time we saw her, it didn’t go so well

Many Half-Life fans will have Half-Life 2: Episode 2’s ending burned into their brain by now. Not just because it’s the last moment of original Half-Life content for 12 years, but because of its particularly tragic events (NOTE AGAIN: This is where the spoilers really kick in). Gordon and Alyx are preparing to leave a resistance stronghold in search of an Aperture Science facility, aided by Eli.

In the game’s final moments, the Combine attack, incapacitate Gordon and Alyx and kill Eli. Dog saves Gordon and Alyx, who ends the game holding her father in her arms, sobbing.

The rumor is that Half-Life: Alyx will be a prequel to Half-Life 2, so we likely won’t see the direct ramification of these events. But that does mean we’ll probably get a chance to see Alyx and Eli’s relationship in greater detail. We wouldn’t be surprised if, by the end of the game, the final moments of Episode 2 are made all the more heartbreaking than they already were.

Far from it, in fact. The original Half-Life actually had three expansion campaigns that cast us as new characters. In Half-Life: Blue Shift we played as friendly security guard, Barney (who also returns in Half-Life 2). In Opposing Force we were one of the soldiers sent into the Black Mesa facility. Finally, a PS2-exclusive co-operative campaign cast two players as scientists in the Black Mesa incident too.