According to Facebook, over half of Instagram’s roughly 1 billion users visit Instagram Explore to discover videos, photos, livestreams, and Stories each month. Predictably, building the underlying recommendation engine — which curates the billions of pieces of content uploaded to Instagram — posed an engineering challenge, not least because it works in real time.

In a blog post published this morning, Facebook for the first time peeled back the curtains on Explore’s inner workings. Its three-part ranking funnel, which the company says was architected with a custom query language and modeling techniques, extracts 65 billion features and makes 90 million model predictions every second. And that’s just the tip of the iceberg.

Before the team behind Explore embarked on building a content recommendation system, they developed tools to conduct large-scale experiments and obtain strong signals on the breadth of users’ interests. The first of these was IGQL, a meta language that provided the level of abstraction needed to assemble candidate algorithms in one place.

IGQL is optimized in C++, which helps minimize latency and compute resources without sacrificing extensibility, Facebook says. It’s both statistically validated and high-level, enabling engineers to write recommendation algorithms in a “Python-like” fashion. And it complements an account embeddings component that helps identify topically similar profiles as part of a retrieval pipeline that focuses on account-level information. 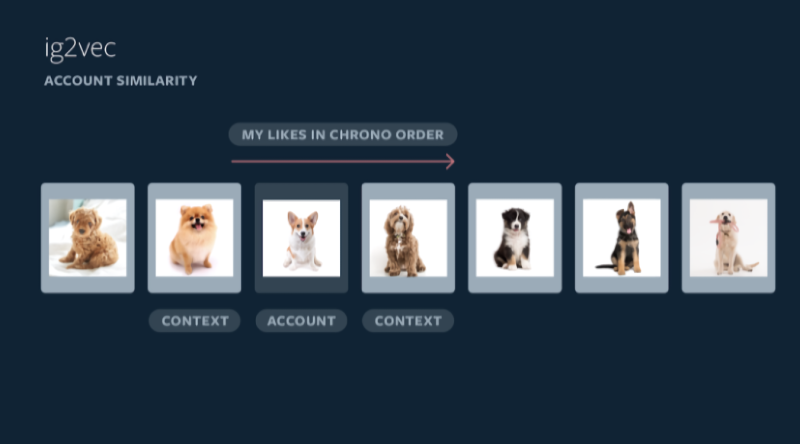 A framework — Ig2vec — treats Instagram accounts a user interacts with as word sequences in a sentence, which informs the predictions of a model with respect to which accounts the user might interact with. (Facebook notes that a sequence of accounts interacted with in a session is more likely to be topically coherent compared with random accounts.) Concurrently, Facebook’s AI Similarity Search nearest neighbor retrieval library (FAISS) queries millions of accounts based on a metric used in embedding training.

A classifier system is trained to predict a topic for a set of accounts based solely on the embedding, which when compared with human-labeled topics makes evident how well the embeddings capture topical similarity. It’s an important step, because retrieving accounts similar to those a user has expressed interest in helps narrow down a per-profile ranking inventory.

Ranking accounts in Explore based on interests necessitated predicting the most relevant content for each person, according to Facebook, and gave rise to a lightweight ranking distillation model that preselects candidates before passing them to complex ranking models. Using knowledge in the form of input candidates with features and outputs from the more complicated models, the simpler model tries to approximate the main ranking models as much as possible via direct (and indirect) learning.

Explore consists of two main stages, according to the team that designed it: the candidate generation stage (also known as the sourcing stage) and the ranking stage.

During the candidate generation stage, Explore taps accounts that users have interacted with previously to identify “seed accounts” of interest. They’re only a fraction of the accounts about the same interest, but they help identify topically similar accounts when combined with the above-mentioned embeddings.

Knowing the accounts that might appeal to a user is the first step toward sussing out which content might float their boat. IGQL allows different candidate sources to be represented as distinct subqueries, and this enables Explore to find tens of thousands of eligible candidates for the average person across many types of sources. 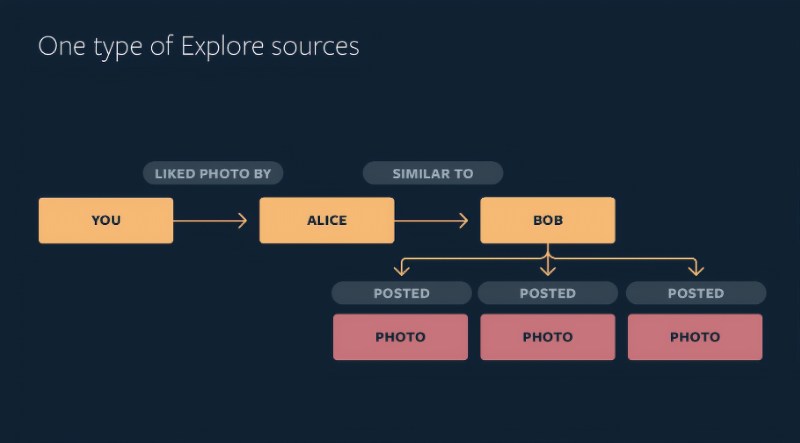 Above: This graphic shows a typical source for Instagram Explore recommendations.

To ensure the recommended content remains safe and appropriate for users of all ages, signals are used to filter out anything that might not be eligible. Algorithms detect and filter spam and other content, typically before an inventory is built for each user.

Those filtering systems are quite effective, if Facebook’s latest Community Standards Enforcement Report is any indication. The network says that 845,000 pieces of content relating to self-injury and self-harm were removed in Q3 2019, of which 79.1% were detected proactively, and that over 99% of child nudity and exploitation posts were deleted over the past four quarters.

For every Explore ranking request, 500 candidates are selected from the thousands sampled and are passed along to the ranking stage. It’s there that they encounter a three-part infrastructure intended to balance relevance with computation efficiency. 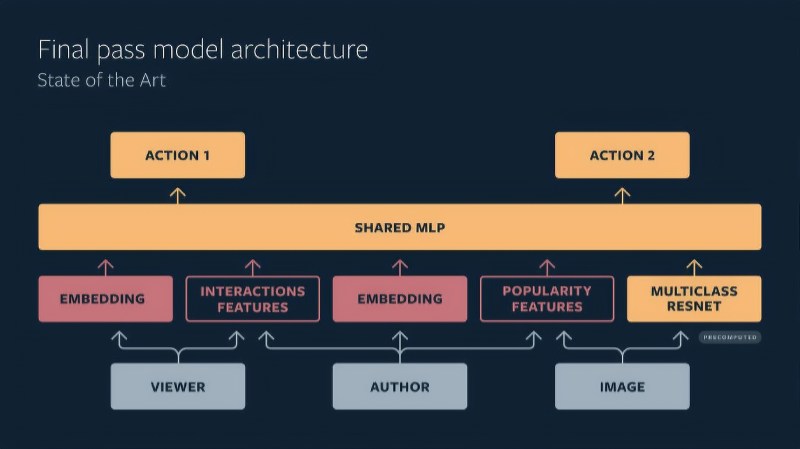 Above: An illustration of the current final-pass model architecture.

Sometimes the first-pass distillation model mimics the other two stages in ranking order. The fix is a multi-task, multi-layer algorithm that captures signals to predict actions people might take on content, from positive actions such as tapping Like or Favorite to negative actions like tapping the See Fewer Posts Like This button. The predictions are combined using a value model formula to capture prominence, after which a weighted sum determines whether the importance of a person saving a post, say, is higher than their liking a post.

In the interest of maintaining a “rich balance” between new content and existing content, the Explore team incorporated a rule into the aforementioned value model that boosts content diversity. It downranks posts from the same author or seed account by adding a penalty factor so users don’t see multiple posts from the same person or the same seed account in Explore.

“We rank the most relevant content based on the final value model score of each ranking candidate in a descendant way,” wrote the blog authors. “One of the most exciting parts of building Explore is the ongoing challenge of finding new and interesting ways to help our community discover the most interesting and relevant content on Instagram. We’re continuously evolving Instagram Explore, whether by adding media formats like Stories [or] entry points to new types of content, such as shopping posts and IGTV videos.”