Ubiquitous connectivity gives the Internet of Things (IoT) and cloud carte blanche to generate data at truly Tribble-like rates. The volume of data created by mostly-connected systems in 2023 is forecast to be 10 times larger than in 2014, with more than half from endpoint IoT devices.

The traditional storage hierarchy is losing its battle to keep up. So now’s the time for practitioners and investors to get familiar with emerging memory technologies designed to move more information closer to processing for analytics, AI, and other data-driven applications. 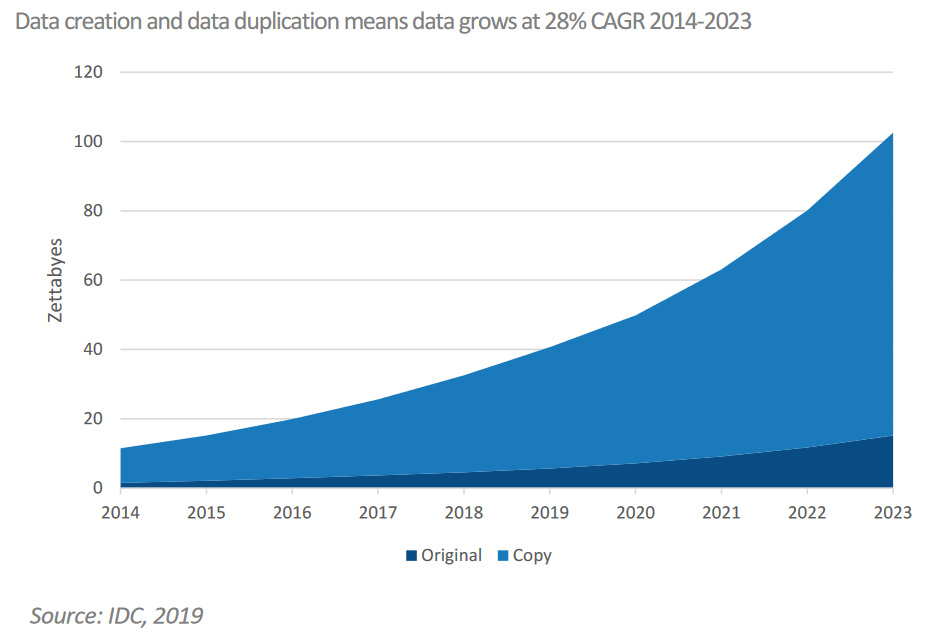 In the first part of our series, we talked about the three top emerging contenders: Intel’s Optane DC persistent memory technology, which bridges the gap between DRAM and SSDs, magneto-resistive RAM with ambitions to excel in edge computing applications, and ReRAM, a potential replacement for flash memory.

NRAM, developed by Nantero, is composed of carbon nanotube (CNT) memory cells that enable DRAM-class performance at a competitive price per bit, data persistence like the NAND flash in SSDs, zero power consumption in standby mode, and exceptional retention. 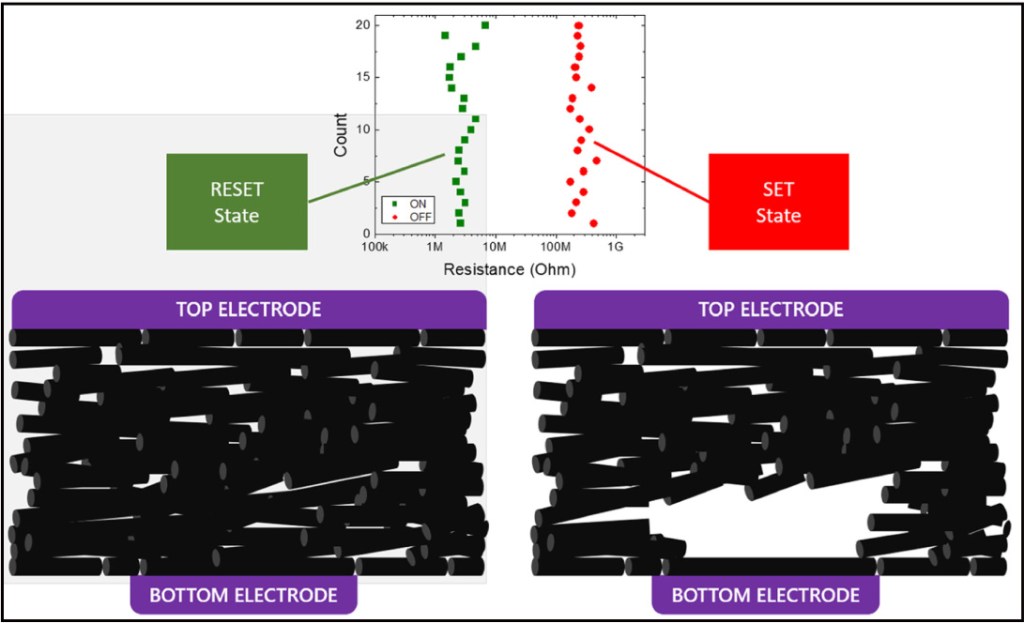 Above: The SET and RESET states of a CNT memory cell are defined by high and low resistances, which correspond to ones and zeros.

Each CNT cell consists of many hundreds of carbon nanotubes deposited between two electrodes. Switching voltages applied between the electrodes forces the tubes to connect or disconnect, resulting in a change of resistance that corresponds to ones and zeros. Molecular forces maintain those states effectively enough for Nantero to claim more than 300 years of data retention at 300°C.

There is no shortage of business cases for a persistent memory technology as fast as DRAM, also referred to as memory class storage. But at this year’s Storage Developer Conference, Bill Gervasi, Nantero’s principal systems architect, gave us a taste of what a world with NRAM might look like.

“Our carbon nanotube memory is implemented as a cross-point. And then, what we’re going to do is take these cross-points…and we’re going to put a DDR4 or DDR5 PHY in front of it. What we’re doing is translating the DDR protocol to our internal structure.” 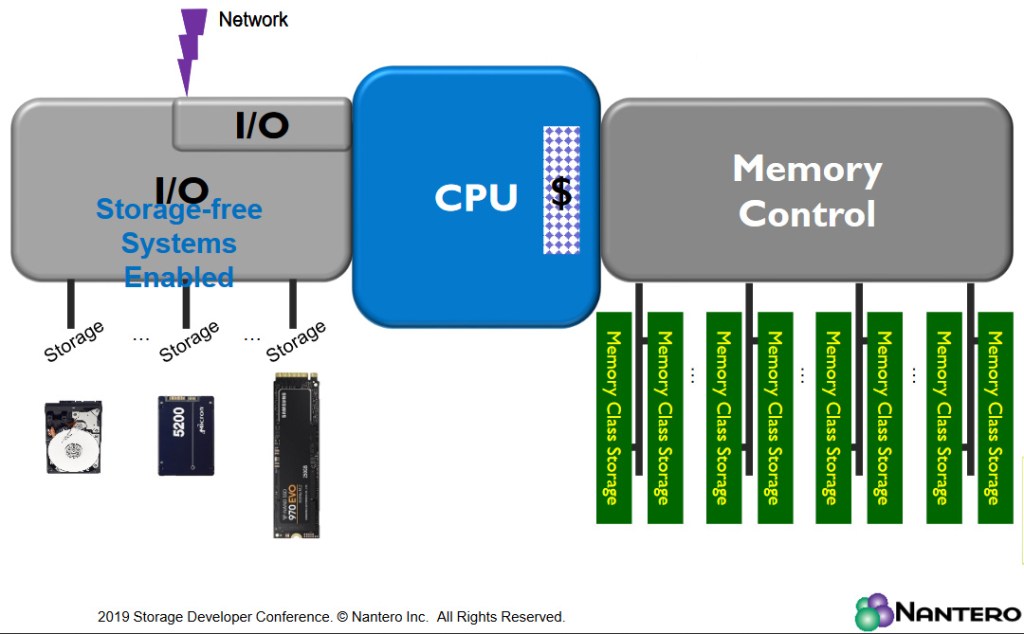 Above: The rise of memory class storage could be revolutionary if it allows you to run all of your workloads from NRAM-equipped DIMMs.

Gervasi, who is also chairman of the JEDEC non-volatile memory committee, went on to describe a drop-in replacement for DRAM using a technology compatible with DDR requirements such as NRAM. These new modules could soon pave the way for completely storage-free systems.

Anyone with an application able to fit in main memory should be immensely excited about the implications of memory class storage, particularly since a proposed NVRAM standard enhances the DDR5 protocol to support 128Tb (or 16TB) per device. That’d be a ton of NRAM per DIMM slot for in-memory computing.

Phase-Change Memory: Optane may be proof that this works

We covered Intel’s Optane DC persistent memory in the first part of our series. But we didn’t identify Optane’s underlying technology because, frankly, its secret sauce is closely guarded by Intel. With that said, two years’ worth of industry analysis suggests Optane is a type of phase-change memory (PCM). And since Optane is already generating revenue, there’s a strong possibility that other PCM implementations could factor into an emerging memory market worth as much as $20 billion by 2029. 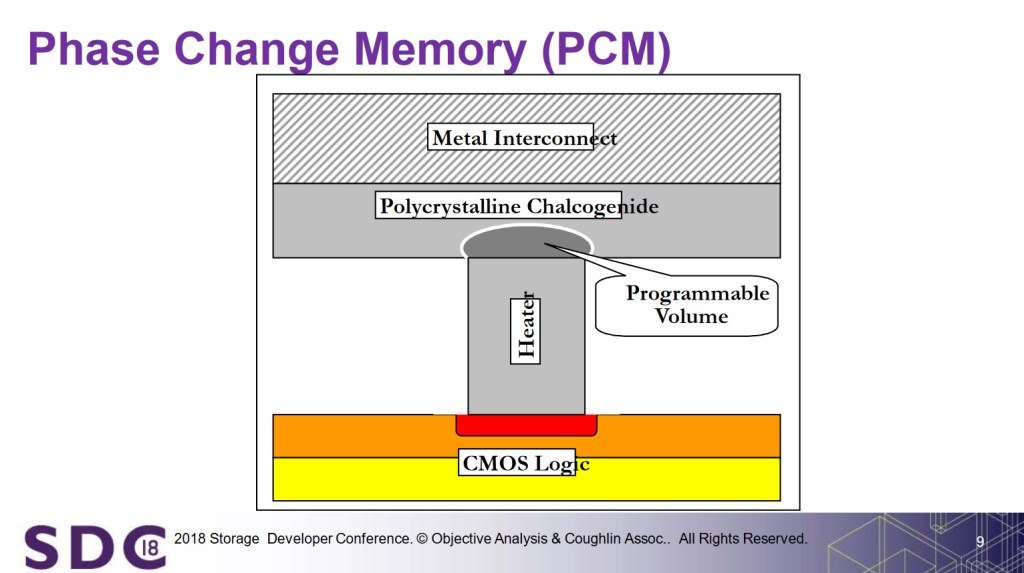 Above: By varying temperature, it’s possible to put chalcogenide glass into an amorphous or crystalline state, affecting its resistance.

Phase-change technology exploits the novel behavior of chalcogenide glass. Briefly applying a high temperature and allowing the glass to cool puts it into an amorphous state with high electrical resistance. Heating it to a lower temperature, but for more time, sets the alloy back to a crystalline state with low resistance.

In a presentation at Flash Memory Summit 2019, Mark Webb of MKW Ventures Consulting, predicted that PCM-based chips proposed by companies other than Intel will emerge in the 2020 timeframe. IBM, Micron, Samsung, STMicroelectronics, and Western Digital are all players in the space, too. Intel can optimize its processors and architecture to benefit maximally from Optane’s capabilities, so it enjoys a big advantage in any forthcoming firefight. However, there’s a lot of work going into the simplification of PCM technology that could give increased competition.

Abu Sebastian and his team at IBM Research are exploring the use of just one chemical element — antimony — to build smaller, denser, and more efficient PCMs. Although they’re still working to stabilize the material against rapid crystallization at room temperature, the researchers believe they can increase its retention time. If they’re successful, it’d become easier to ensure the material’s consistency, potentially improving endurance.

All the memory technologies in our two-part series are non-volatile. But whereas the others offer innovative ways to get lots of persistent data closer to compute resources, Ferroelectric RAM (FRAM) is only available at densities up to 8MB. In other words, you won’t see it flanking server CPUs any time soon.

Above: The positively-charged ion in a lead zirconate titanate (PZT) molecule can be in one of two low-energy states. This forms the ferroelectric property that FRAMs use to store data.

Like DRAM, FRAM is based on a one-transistor, one-capacitor storage cell design. But FRAM uniquely uses material exhibiting ferroelectric properties as its capacitor dielectric. Each molecule of the dielectric has a positively-charged ion in the middle with two equal low-energy states that can be set by applying an electric field in one direction or the other. When the power goes out and voltage is removed, those states remain fixed.

But because the memory cell capacitor needs to hold enough charge for a sense amp to detect ones and zeros, FRAM cells are large. Several companies are exploring alternative approaches to classic FRAMs with better scaling prospects. For example, FMC is working with hafnium oxide — already a gate insulator in standard high-k metal-gate transistors –modifying it to give the material ferroelectric properties.

Above: According to FMC, any logic transistor can be turned into a memory cell by giving its hafnium oxide insulator ferroelectric properties.

The industry is still working to perfect this so-called FeFET, but its potential to expand the reach of ferroelectric memory technology is turning heads. If any logic transistor can be turned into a memory cell, FeFETs may end up being higher-performance, lower-power, and easier to manufacture than embedded flash memory or competing non-volatile memory technologies. Keep FeFETs on your radar for IoT applications, consumer electronics, and automotive storage. The tech’s inherent tamper resistance is ideal for enhanced data security on card chips, while radiation hardness stands up to the rigors of medical and aerospace environments.

DRAM and flash aren’t able to keep up with the massive amounts of data being generated. Every company seems to have a visual representation of the storage hierarchy with some gap drawn in between the two technologies. And the problem is only going to get worse. 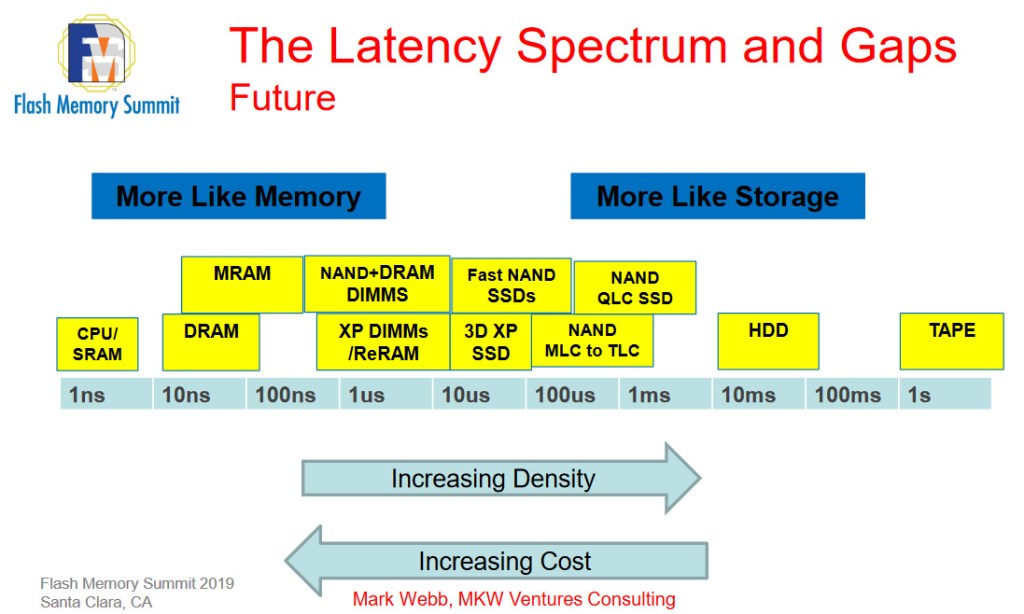 Above: There may be room for multiple non-volatile memory technologies between DRAM and NAND flash.

Analyst Mark Webb believes DRAM will continue to scale for the next five years. Its pace is slowing though, and the fact that DRAM is volatile opens the door to data loss. At least NAND memory offers persistence. But as flash scales, endurance and performance take a hit. So really, neither technology is ideal.

Although none of the emerging memories we discussed check all those boxes, a combination will keep big data flowing. As your data processing needs grow, pay close attention to terms like storage class memory and memory class storage. Those are the umbrellas under which emerging memories will be classified, augmenting DRAM and NAND flash.